Bioretention systems (also known as biofiltration systems or raingardens) promote the filtration of stormwater through a vegetated filter media (NOTE: whilst the user has the option to specify a non-vegetated system, it is strongly recommended that bioretention systems always be vegetated). Non-vegetated systems will generally give poor water quality outcomes and are more likely to clog prematurely. The type and composition of filter medium determines the effectiveness of the pollutant removal, as does the choice of vegetation.

Refer to Modelling Bioretention System Treatment Performance for more details on how bioretention systems are modelled in MUSIC.

In MUSIC, the bioretention node has been further revised, taking advantage of the latest research on biofiltration processes undertaken by FAWB (the Facility for Advancing Water Biofiltration, based at Monash University). Whilst the node has become more ‘complex’, it now allows the user to be much more precise in their specification of the bioretention system that they wish to model.  This is important, because research by FAWB has showed that the specifications of a bioretention system - its filter media, its choice of vegetation, the use of a enhancements such as a saturated zone - all play a critical role in determining the treatment performance.

The user is strongly recommended to refer to the FAWB website (www.monash.edu.au/fawb), where guidelines for the design, construction and maintenance of bioretention systems are available for download (at no cost). Whilst we try to provide some guidance on selection of the appropriate parameters in this MUSIC manual, the user should use the FAWB guidelines to properly understand the appropriate design for their particular circumstance.

NOTE:  It is imperative that the parameters which are specified in the MUSIC model reflect those that have been (or will be) used to construct the system in reality.  For example, if the MUSIC model of the bioretention system specifies a TN content of the filter media of less than 1000 mg/kg, then the specification for construction of the system must stipulate this as a requirement for the filter media to be supplied.

A conceptual diagram of the bioretention system properties in MUSIC is presented below:

The location name will be displayed under the bioretention system node icon on the main worksheet.

The inlet properties define the flow rate at which the stormwater begins to bypass the treatment device.

The Storage Properties define the physical characteristics of the surface storage above the infiltration medium of the bioretention system.

Defines the maximum depth of water ponding above the filter media before flow starts to discharge over the outflow weir. The Extended Detention Depth is defined as a depth in metres.

Defines the surface area of the bioretention system storage (ie. the surface storage above the infiltration medium) in m2. The hydrologic routing analysis calculates the volume of water in storage during a storm event by multiplying the depth of water in the pond by this surface area. NOTE that where the sides of the extended detention zone are non-vertical, this area will normally be larger than the Filter Area specified in the Filter and Media Properties and should be equivalent to the surface area at half the extended detention depth.

The filter and media properties define the physical, hydraulic, chemical and biological characteristics of the filtration medium component of the bioretention system.  These are all critical for defining the predicted water quality performance of the system; the parameter values chosen should match what will realistically be used for construction of the system.  For further guidance, please refer to the guidelines available from FAWB (https://www3.monash.edu.au/fawb/).

Defines the plan area of the filtration medium component of the bioretention system in m2. This can often be less than the surface area of the storage zone (where the extended detention depth has sloped sides).

Defines the perimeter (in metres) of the filter media which is unlined.  This parameter is used by MUSIC to calculate the amount of exfiltration that will occur through the sides of the system.  Where the entire system perimeter is lined with an impermeable material, the Unlined Filter Media Perimeter should be set to 0.

Example: a rectangular bioretention system with a filtration area measuring 5 m x 2 m is to be constructed.  One side (5 m) is to be lined, to avoid potential water migration near adjacent infrastructure.   The specified Filter Area is thus 10 m2, whilst the unlined perimeter is 5 + 2 + 2 = 9 m.

This is the flow water through the filter media at saturation in mm/hr. The FAWB guidelines recommend a range of 100-400mm, but generally, a range of 100-200mm is preferred. Very high flow rates and low soil water retention can result in poor plant growth. It is possible to use lower flow rates although a larger area may be required to compensate. The value chosen should accurately reflect the material to be used, provided in the table below.

Defines the depth of the filter medium in metres. This depth should exclude the drainage layer and transition zone, unless they form part of a Submerged Zone (see Infiltration and Outlet Properties).

Defines the content of nitrogen which is present in the specified filter media (in mg/kg). The FAWB Filter Media Guidelines recommend that the TN content should be kept below 1000 mg/kg for optimal treatment performance.  A value of around 750-950 is considered appropriate (a value lower than 600 mg/kg may lead to difficulties in plant establishment within the bioretention system.

NOTE: The value used must match the value which is specified in the contract for supply of filter media for the system in reality.

Defines the organic matter content of the media. Research has shown than an optimal range is between 1 and 3% (lower values will result in difficulties with plant establishment, whilst values higher than 5% will result in leaching of N and P from the media).

NOTE:  The value specified must match the value which is specified in the contract for supply of filter media for the system in reality.

NOTE: The value specified must match the value which is specified in the contract for supply of filter media for the system in reality.

The lining properties of the base only are specified in this section (details of lining of the walls are specified by specifying the Unlined Filter Media Perimeter in the Filter and Media Properties section.

Tick the "Yes” box if the filter is lined with an impermeable liner and the "No” box if it is not.  Note that unless an exfiltration rate is entered, no change in performance will result if the base is unlined.

The physical characteristics of the outlet overflow weir are defined in this section of the dialogue box, along with details about how water may infiltrate into surrounding soils and the presence of a submerged (saturated) zone in the bioretention system.

Defines the width of the overflow weir for the surface storage component of the bioretention system. The overflow weir will only start to carry a discharge of water once the depth in the surface storage reaches the Extended Detention Depth defined above. The Overflow Weir Width is defined as a length in metres.  Care needs to be taken to ensure that the weir width used is sufficient to cater for the maximum flow rate expected through the system.

By creating a submerged zone in the base of the bioretention system (ie. by elevating any outlet pipe and using a lined base (may not be necessary in low permeability soils)), the treatment performance will be improved and plant growth and success is likely to be increased.  There are specific guidelines on the appropriate depth and composition of the submerged zone.  For example, to function optimally, the submerged zone needs an addition of carbon (around 5%  by volume), which will help promote denitrification..

NOTE: MUSIC accounts for exfiltration out of a bioretention system only from the base and from any submerged zone depth.

HINT:  In the case where the bioretention node is being used to model a vegetated infiltration system, the option of a submerged zone should be specified as being the depth of the filter media, since MUSIC will then take into account the lateral exfiltration through the sides of the system.

It is possible to record flux data for the bioretention system using Fluxes:

Refer to Fluxes for more information about fluxes.

The Notes button allows you to record any important details or assumptions for the bioretention system (for example, you may provide an explanation of how the filter media properties were determined). It is good practice to provide notes of any important assumptions, for future reference by others using the model.

The advanced properties section (opened using the ‘More’ button) of the bioretention system properties dialogue box displays the hydraulic characteristics for the overflow weir structure, and the parameters that describe the treatment processes in the bioretention system, including the media soil type, its porosity (along with that of the submerged zone, if present) and the coefficient of horizontal flow (exfiltration through the sides). 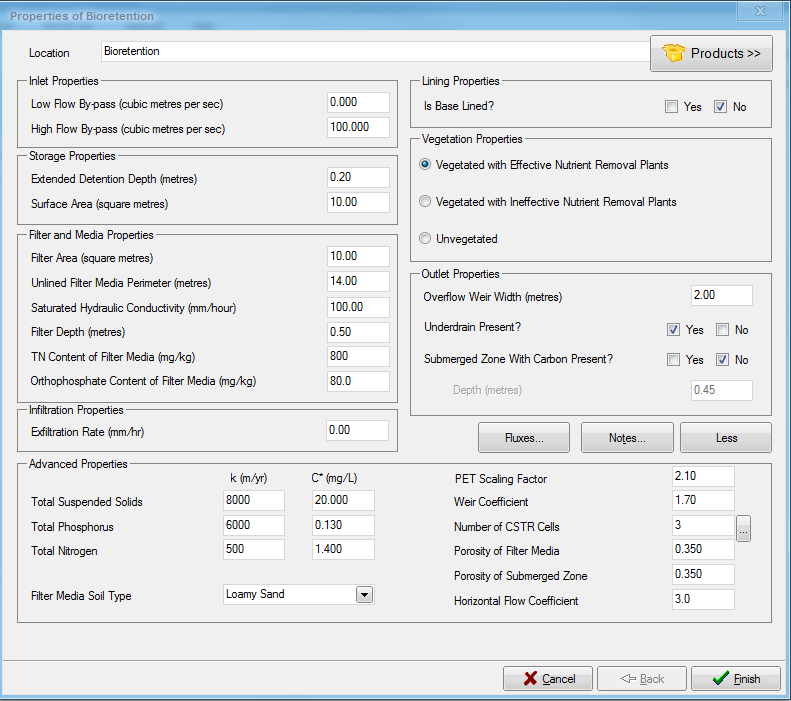 Defines the type of media which makes up the filter media zone of the bioretention system. Loamy sand, sandy loam and sand are the most commonly used media. The material chosen should match that which will be specified in the construction of the system.

H        Height of pond above the Extended Detention Depth.

The default Weir Coefficient of 1.7 may be altered if desired.

Defines the porosity (voids ratio) of the filter media. MUSIC provides a ‘tooltip’ with guidance on the appropriate values to use, depending on the filter media specified. The filter media is normally made up of sand or loamy sand. The following general values are recommended:

Defines the porosity (voids ratio) of the submerged zone. MUSIC provides a ‘tooltip’ with guidance on the appropriate values to use, depending on the filter media specified. A submerged zone is normally made up of sand, gravel or scoria. The recommended rules are  as shown in the above same (same as the porosity for filter media).

MUSIC will simulate exfiltration from the unlined perimeter of the bioretention node whenever there is a submerged zone present (lateral exfiltration will be modelled up to the depth of the submerged zone). Calibration studies have shown that the rate of exfiltration from the wall (sides) of a system will be approximately three times greater than the same area of base (due to the two dimensional infiltration offered by the side). This parameter (of 3) has been specified by default in MUSIC and should only be modified where peer-reviewed published data is available to support such a modification.

The change means that MUSIC will provide more accurate predictions of evapotranspiration and can thus provide more precise information on the impact of biofiltration systems on the water balance and flow regime.

Pollutant Removal through the Filtration Medium

In MUSIC, the pollutant removal performance through the filtration medium is based on the extensive research undertaken on bioretention systems in Australia by the Facility for Advancing Water Biofiltration (FAWB); see www.monash.edu.au/fawb.  The treatment performance is governed by a series of functions, which determines outflow concentrations and/or removal rates for TSS, TP and TN .The function takes into account all important characteristics of the bioretention system and its operating conditions, including:

For more information, please refer to the see the section on Modelling Bioretention System Treatment Performance, where a full description is provided.