Time series graphs present a plot of user-specified data against time, and provide a simple way to view the overall performance of a particular treatment node, or view the general behaviour of a source node or link.

The Time Series Graphs command on the Context-sensitive menu opens the Quick Graph Setup box. Options available include inflow and outflow discharges, concentrations, and loads. Some options can be changed later by editing the graph. Time series graphs can also be used to compare observed and predicted data (see Comparing Observed and Simulated Data). The time series graph set-up dialog also allows the time-step of the graph to be accumulated to a higher value than the one used to run the model.

The time-step at which the Time Series Graphs is plotted can be specified by the user. For example, if a 6 minute time-step was used to create the model, a daily time-step could be used to analyse the results (e.g. to give the daily mean concentration of TSS). New to music version 5 is the ability to select a custom time-step for reporting of Time-Series Graphs, 'All Data' Statistics Graphs, and 'All Data' Cumulative Frequency Graphs. Prior to v5, the reporting time-step had to be a multiple or the run time-step, and hence a greater flexibility in extracting data is now available. The only restriction that exists, is that the reporting time-step must be greater than the model run time-step. 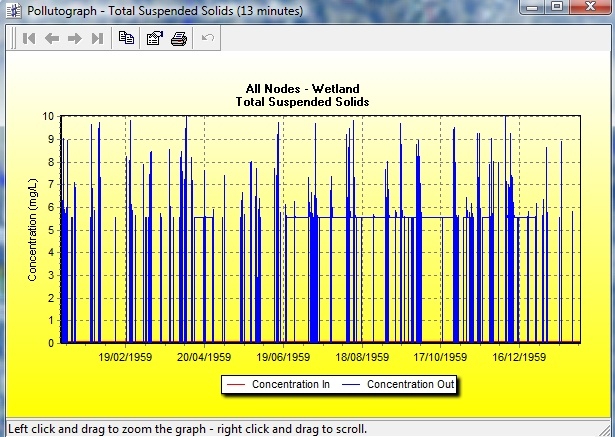 Properties of the graph can be modified using the edit button

. Editable properties include colours, scales and displayed parameters. For example, to change the timeframe shown on the x-axis, click on the Paging panel, and edit the number of points shown per page. To display all data points on the one graph page, set Points per Page to zero.

A graph can be moved, resized (within limits), and captured like any other window. It can also be copied to the clipboard (

) for pasting into other applications, or sent directly to a printer (

You can zoom in on a portion of the graph by left-dragging over the required area. You can ‘drag’ the graph along either axis by right-dragging on the graph. You can undo any changes by clicking the ‘Restore to Default’ icon (

The Time Series Graph command for Meteorological Data, accessed via the Catchment menu, plots time-step rainfall and daily evapotranspiration data in millimetres against time. No further setup information is required, but the graph format and data shown can be modified using the edit button