There is an option to re-use water from any treatment node that has a permanent pool volume, plus the infiltration system node, by specifying a demand:

The Max Drawdown height specifies the water level allowed for re-use, starting from the top. For example:

This is shown in the diagram below:

The demand can be distributed using the following options:

To edit the user defined distribution of the annual demand, select the

button. The graphical editor shown below allows the user to edit the percentage of the annual demand for each month.

To edit the monthly demand percentage, click and drag the unlocked bar graph for the required month, until the desired value is displayed. To unlock one of the monthly bar graphs, select the

image is displayed will be adjusted.

To enter a user defined timer series, either type in the file path and file name, or click on the Browse button, to locate a previously prepared comma separated value (CSV) file which contains the reuse rate (in L per time-step). The re-use file must be a CSV file with a separate reuse value on each line. The time-step for the reuse file must be the same as that used in the meteorology template file. Only a single column of data should be provided in the CSV file. A header row may also be incorporated or may be left blank.

Demand will only be met when there is available storage in the permanent pool of the treatment node.

As discussed above, a user defined time series of reuse can be specified in music. This facility provides a more realistic reuse demand specification capability. The facility also allows exploration of the impacts of reuse that could not previously be simulated, such as trends in household demand, steps in demand as occupancy changes, etc.

The user defined reuse file can be specified by selecting the "

" button or by pasting the file address in the text box. The re-use file must be a CSV file with data separated line by line. The time-step for the reuse file must be the same as that used in the meteorology template file. A single header row should be incorporated. 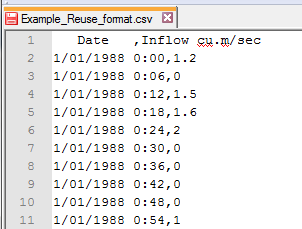