All ownership systems must have at least a global borrow and payback system, and can also include local borrow and payback systems as well.  These allow for one owner to borrow water from another owner, with the requirement that there is payback of the borrowed water at a later time.  Borrow and payback is necessary to allow the ownership system to function and it enables better and more flexible use of available water. When an exchange occurs, unallocated water owned by one owner is utilised by another owner. The water used by the other owner is termed a borrow and is reconciled against the borrowing owner’s water share. The borrow must be accounted for to determine how much water the borrowing owner should later pay back.

The actual rules that govern borrow and payback are likely to be highly specific to any given water management plan. Currently there is only one river system in Australia where borrow and payback is allowed, namely the River Murray (authorised via the Murray-Darling Basin Agreement). The implementation of borrow and payback in Source is principally designed to model the arrangements authorised in the Murray-Darling Basin Agreement, as followed in practice. However, the implementation is intended to provide sufficient flexibility that would enable it to be used for other ownership systems.

How a borrow is shared between owners using a distribution system, accounted and reconciled, in Source, is described here. For more information on how a borrow is generated, in the first instance see the Scientific Reference Guide entry for Ownership at nodes and links - SRG.

This version of Borrow and Payback has been developed as part of the development of Ownership modelling by eWater CRC for Source.

Borrow and Payback has been modelled in predecessors to Source, such as IQQM and MSM, for many years. The concepts in these models have been updated and enhanced to suit the needs of Source.

The model configuration in Source must include at least one Ownership System with at least two Owners for borrow and payback to be modelled.

Automatically included with the full version of Source.

The Murray Darling Basin Agreement enables the operators in the River Murray to exchange the ownership of volumes of water between the states of New South Wales (NSW) and Victoria when the lending state has water surplus to its requirements. An example of this is when state owned tributary inflows are greater than expected. These excess tributary flows result in a state’s share of water in the river being surplus to that required to meet to meet its ordered requirements. Where possible, this excess water is utilised by the other state (owner) and the amount of water that needs to be released from storage is reduced. The water used by the other state (owner) is termed a borrow and is reconciled against the state’s water share. In the case of the River Murray, payback and account balances are reconciled at Lake Victoria.

The Agreement also allows for NSW and Victoria to borrow water from one another that is held in storage. As an example, NSW may borrow Victorian owned water held in Hume Reservoir if NSW has insufficient volume in Hume Reservoir to meet downstream demand (noting that NSW must have the capacity to payback the borrow). The Agreement requires that a separate account of borrow is maintained at some storages as:

Hence accounting is required for:

To model borrow and payback arrangements similar to those described in the Murray-Darling Basin Agreement, Source supports a global borrow accounting system that applies throughout an ownership system, and also local borrow accounting systems for individual storages. The Agreement refers to an exchange of water, which indicates that when a state/owner borrows water, it needs to pay back to the owner it borrowed the water from. In a global system, payback can occur anywhere in the river network covered by the system of ownership.  In a local system, payback must occur at the same storage. Payback can only occur when the borrowing owner has water within the relevant system (the ownership system or a storage) to transfer to the lending owner.

Modelling of borrow and payback is performed for every model element where there is a loss from or a gain to the river. These include:

Other definitions can be found in the eWater glossary.

Structure of Borrow and Payback Systems

When modelling borrow and payback, an ownership system for a scenario will have:

The structure of borrow and payback systems is illustrated in Figures 1 and 2, below. 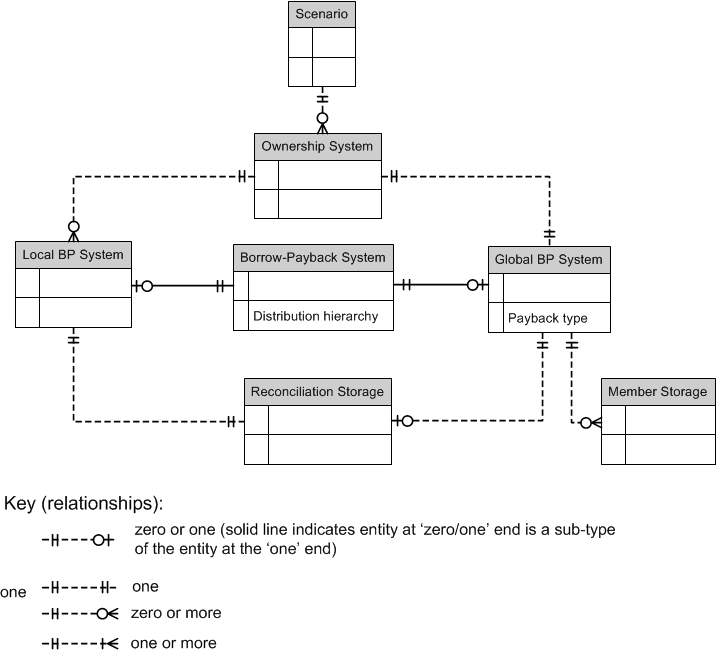 Figure 2: Example of storage allocation to a scenario's borrow and payback systems 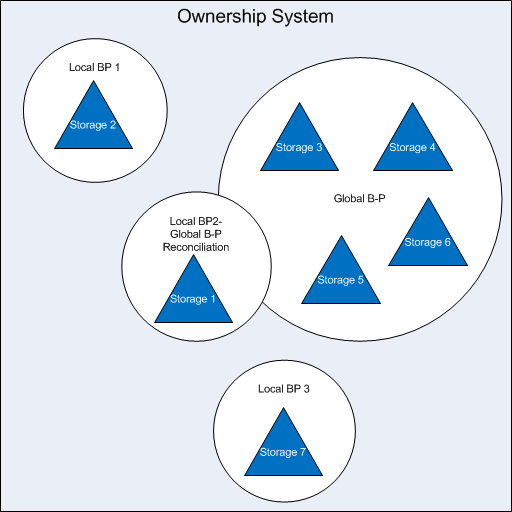 Figure 2 illustrates how each storage that falls within a scenario’s ownership system can only be a member of one borrow and payback system, except that where there is reconciliation/payback at a storage for the global system, this storage must also be in a local system.

Rules of the Borrow and Payback System (Summary)

Rules defining the borrow and payback system are listed below:

The Murray Darling Basin Agreement only requires that borrow and payback occur between two state owners, so no specific rules have been required to determine how an owner shares out their surplus water when there is more than one other owner which could require it – i.e. those with a deficit. To allow the flexibility to meet future requirements, Source allows the modeller to configure for each borrow and payback system a ‘distribution system’ (otherwise referred to as a borrow network, see Assumptions and Constraints 9 and 10).

At an ownership system level, it must be possible for every owner to lend to every other owner, to ensure that water not required by one owner is available to any other owner that might need it.  Hence for a global borrow and payback system, sharing must be enabled for every owner-other owner combination.

Once each payback volume is determined, its ownership is simply transferred from the debtor owner to the creditor, and the borrow account is adjusted for the volume transferred. If full payback is not possible at a time step, the remaining debt is preserved, so it may be paid back in future time steps.

Resource assessment systems (RAS) take into account the borrow between owners when determining the volume of water available for allocation. In a global borrow and payback system without a payback storage nominated, payback is effected by adjusting the water availability in the resource assessment process and then letting the day-to-day borrows in the flow phase deal with moving the water back to the creditor.

For example, if there are two owners A and B, and A owes B 200 GL, and at resource assessment both A and B have 1000 GL each in storage:

Owner A allocates 800 GL to its users and B 1200 GL. Later in the season after the users of owner B have used 1000 GL, B runs out of water and by borrowing starts to take back water from A (which has 200 GL in storage it can't allocate).

Variables and entities used are listed in Tables 2-5, that follow. Rows highlighted in grey refer to entities. Each entity may have its own set of variables and/or methods, which are described in a separate table.

The following variables relate to a Borrow and Payback system:

The following variables are used by the Borrow method in the order and/or flow phases:

The following variables are used by the Payback method at a Storage Node in the flow phase:

The modeller then configures:

The following must be configured for each borrow and payback system:

The list of owners that can share surpluses is specified for each priority level in each borrow and payback system. Source ensures that for a global system, each owner is represented, and can share with every other owner. In a local system, owners may opt out of sharing, or only share to some owners.  In the methodology, this distribution hierarchy is described as BPSystemShare(pl, owner).

Example global system distribution hierarchy (where every owner can share with every other, but not necessarily at all priority levels):

The modeller must specify the global borrow and payback system’s reconciliation type to determine the ‘location’ at which payback occurs and, if required, the storage where this is to occur, as discussed in the section Repayment of Borrow, above.

The accounts for each individual model component that falls within a given borrow and payback system boundary are NOT cumulative, so these start at zero every time step:

Each model component uses the methods described in the following sections to update the relevant borrow and payback system’s accounts in the flow phase for any borrow/lending that occurs at the model component.

Borrow needs to be considered in both the order and flow phases. However, borrow and payback accounting occurs in the flow phase, as it is only at this stage that the flow borrowed/paid back is known.

Surplus(owner), Deficit(owner) - The current ‘surplus’ and ‘deficit’ volume/capacity for each owner. At a storage node, surplus water is any water that is not required to meet downstream requirements in the current time step. This definition may vary between model components, and between the model phases (order or flow). Refer to the SRG entry for the appropriate model component for more information.

Airspace - Each owner’s share of airspace in the borrow and payback system’s payback storage (when there is one). This is needed to limit lending.

UpdateAccounts - Borrow accounting only needs to occur in some circumstances, as described above. This parameter is set or reset according to whether or not borrow accounts are to be updated.

The following steps describe how surpluses are distributed within the given borrow and payback system BPSystem. Note that an owner can participate in sharing at a priority level (is in the owner(pl) and other_owner(pl) lists) when BPSystem.Share(pl, owner) = Yes.

Payback at a Storage (Flow Phase only)

The payback process at a ‘payback’ storage node is performed at the end of the flow phase, when storage releases have been made (so requirements have been met as far as possible).

For more details on payback at a storage see Ownership in Storages - SRG.

More details regarding the way resource assessment systems are configured and allocate water are given in Resource Assessment - SRG and its sub-pages.

Details on data are provided in the Source User Guide.

Table 8. For Storages: Additional Parameter for Borrow and Payback Systems

When a ‘View Time Series’ function/link is selected from an ‘Other Owners’ column, a window allows borrow and payback data for the relevant owner-other owner combination to be displayed as follows:

When a ‘View Time Series’ function/link is selected in the ‘Owner Summary’ column, a window allows a summary of borrow and payback data for the relevant owner to be displayed as follows: 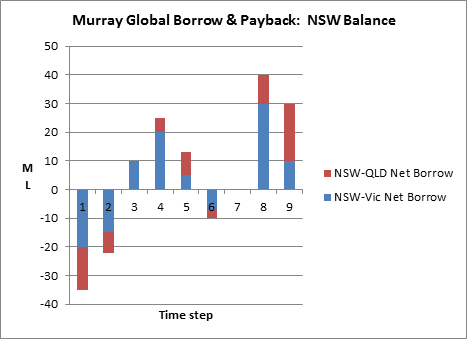 When the ‘View Time Series’ function/link is selected in the ‘All Owners’ row, a window allows borrow and payback totals for all owners to be displayed as follows: 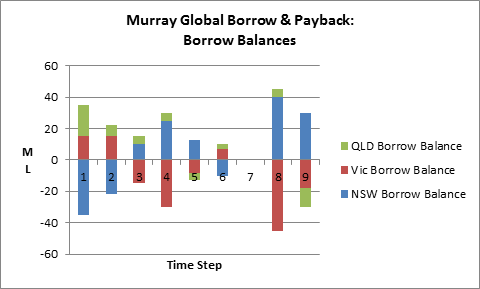