Some features are not available in Source (public version).

Operations forecasting allows you to create alternate forecasts for inflows, water demands, stream flow losses and gains (unaccounted differences) and constituents within a single overall project scenario. In other words, it forecasts the input data for a model. This is not available in Source (public version).

The Operations simulation in Source is split into two phases - the historic 'warm-up' and the forecast period. The former is designed to warm-up the network's physical models by playing all known historic data into the system and overriding modelled values where applicable. In the latter, the Operations forecast models extend historic data into the future, effectively providing an estimate of the effect to the modelled system.

To create a default operations scenario in Source:

Once you have created forecast models, you can disable operations, but retain these models or overrides using the buttons under Operations Data. The first two buttons in this dialog deal with removing input data, whereas the third one deletes all output data that was created for the forecast models. To clear all operations related data (input, output as a well as overrides), click Clear ALL Operations Data.

Before you can begin forecasting, you must seed the model with available historical data (also known as "warming-up the model") using the Simulation toolbar:

This opens the Run w/Warm Up dialog (Figure 2). 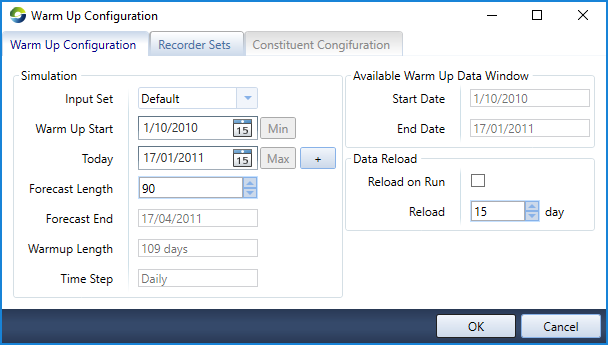 The + button can be used to step the operations scenario forward in time, which allows you to move from one day’s operational scenario to the next. You can also specify the data source using the Input Set drop down menu.

Once operations has been enabled, you can configure forecast input data under the relevant forecasting list item in a node's feature editor. For example, for the inflow node, choose Inflow Forecast under Additional Flow. Each of the parameters that are involved in creating forecasts handle input data differently.

This is different to the Forecasting list item, which relates to ordering for planning and operations models.

The following forecast models extend the originally played in time series using a model. In the absence of a forecast model to generate forecast values, a default value is used, which is typically zero:

Note: Unaccounted difference is named so because if the model were perfect, this would always be zero (the modelled value would match the actual values). In reality, the model does not simulate everything and this typically leads to the systematic over or under estimating of flows. 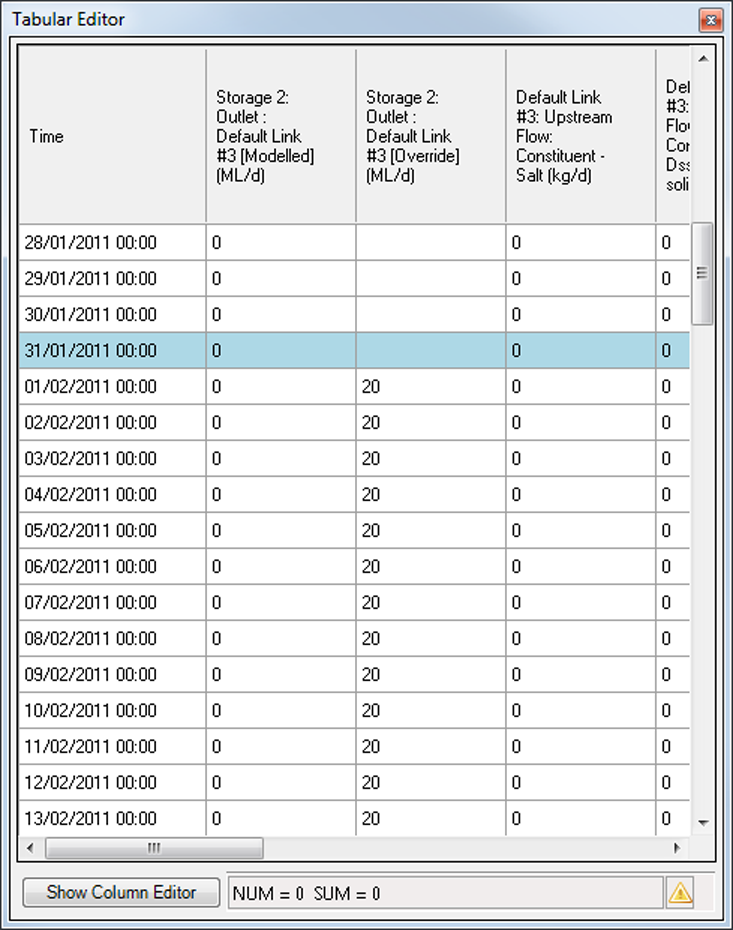 A collection of one or more forecasting models is known as a forecast scenario. You can define one or more scenarios for each node. For example, you might define "wet year", "dry year" and "normal year" scenarios, or variations that reflect your most optimistic or pessimistic expectations. To add a forecast scenario, right-click on the item you want to forecast in the relevant node's feature editor and choose Add Forecast Scenario (Figure 4). You can choose the input set that will be associated with a particular forecast scenario. Right click on Forecast Scenario #<number>, then choose Add Forecast Model to add a model.

Note: Only one forecast model can be active at a point in time during the simulation.

When more than one forecast model has been assigned to a forecast scenario, they are ordered from top to bottom in the hierarchical list. The model at the top of the list runs first. You can change the order of model run by dragging the forecast model to the required position in the list. For each model, you must also specify the number of time-steps it will be active for before moving onto the next model in the list. The last model in the list always has a Time Steps value of All Remaining and will be active for the remainder of the forecast period. 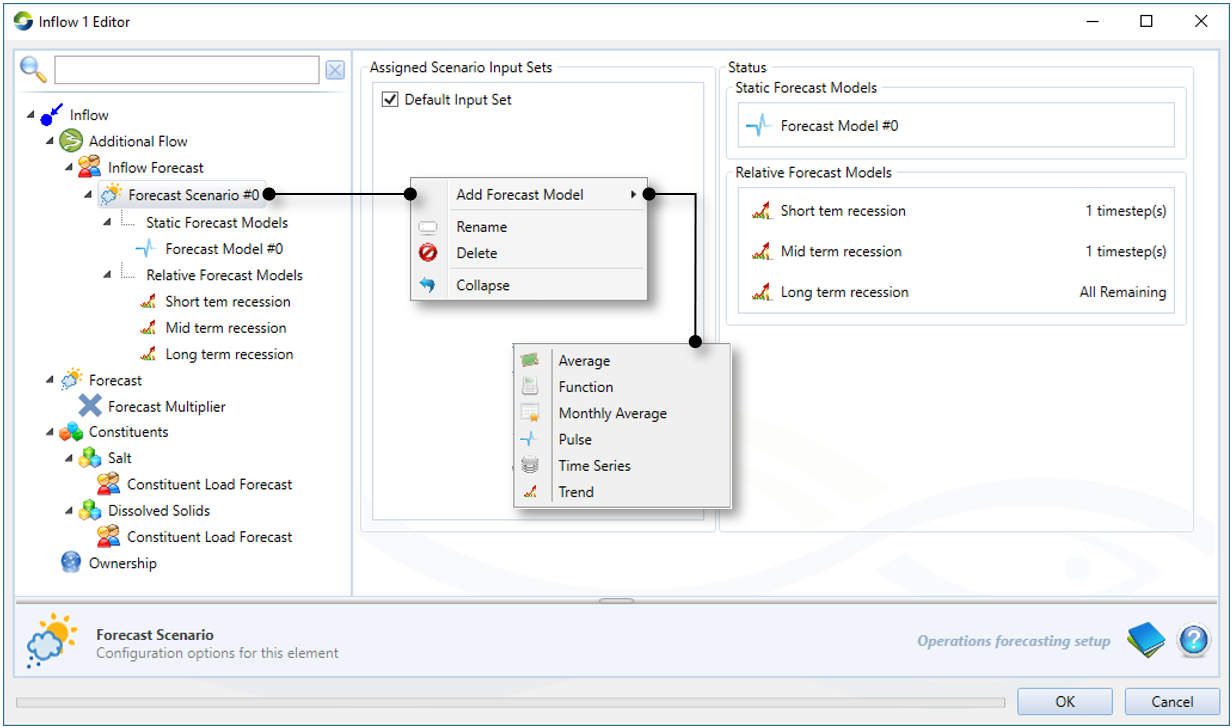 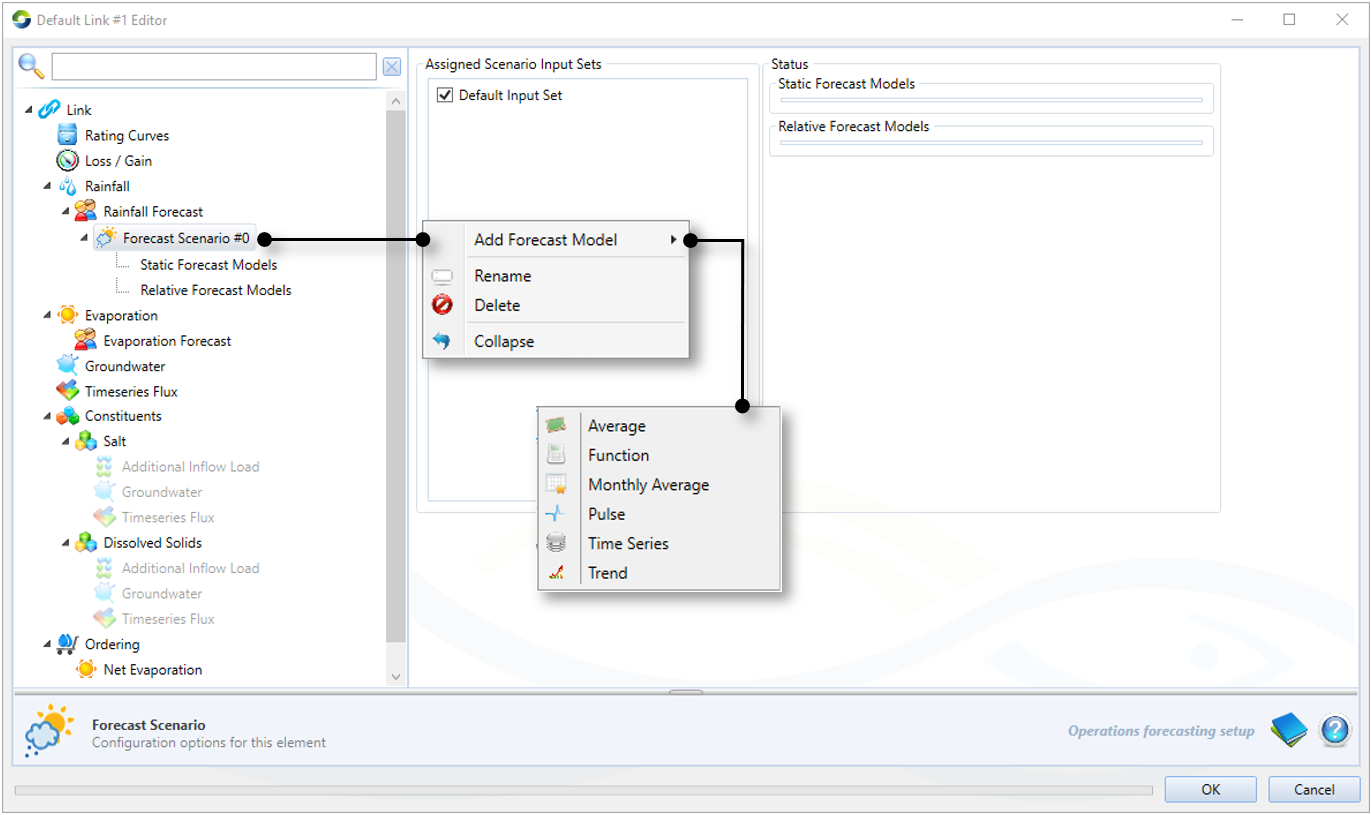 Note: Forecast scenarios are unique to a node and must be configured individually for each node. 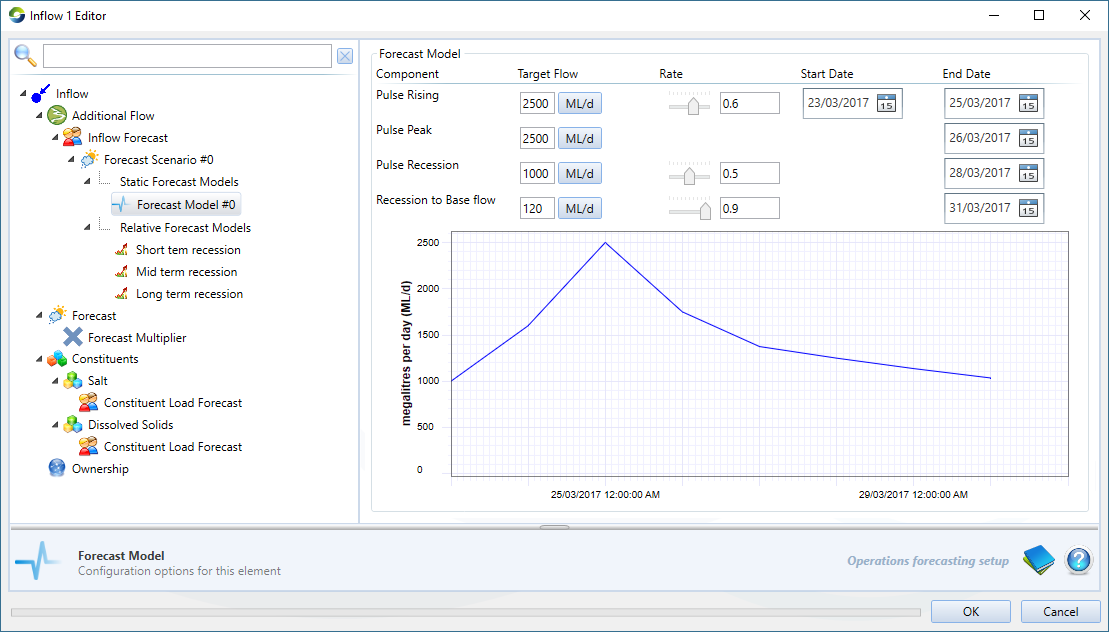 The results of executing one or more forecast scenarios can be viewed using the Recording Manager or the tabular editor (to view and override individual values). Ensure that you enabled recording for the parameter that you are forecasting. For example, to forecast flow, enable recording of the Inflow attribute in the Recording Manager. Figure 5 shows an example of the output of a forecasted model. This forecasting scenario consists of two forecast models. A Trend forecast model is run for the first 10 time-steps and the remaining time-steps have a Function forecast model configured. 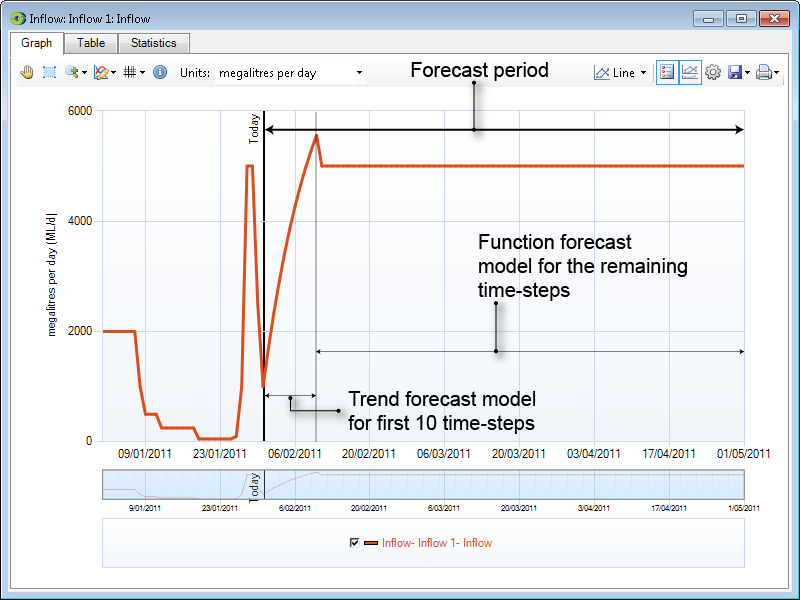