The workflow for integrating urban demand models with a Source Scenario proceeds as follows: 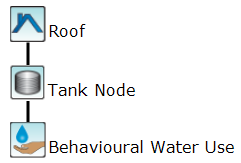 Refer to Running Urban Scenarios for further information on configuring and running an Urban Combination Configuration.

Note that, the Source Scenario should be simulated under the same climate conditions as the Urban Scenarios to ensure that water supplies and demands are consistent.

Figure 2 illustrates the methodology for simulating the urban demand models within a Source Scenario.