This model is applied at the functional unit scale, but can have catchment-wide effects. The model assumes a daily time-step.

For nutrient trapping, the approach is similar to that of the load-based sediment delivery ratio model, with some allowance for enrichment due to factors such as the differential attachment to different particle sizes. The Nutrient Delivery Ratio (NDR) varies from 0 to 1, depending on loading (t/km/yr) as shown in Figure 1. More details are provided in Hairsine (2001). 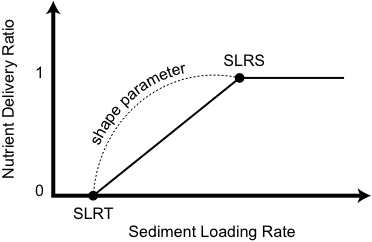 The filter model is constrained by the proportion of the total stream length that is covered by a riparian zone.

The relationship between the nutrient delivery ratio as a function of the sediment loading rate (SLR) and the two thresholds is described by a quadratic function:

From the first constraint:

From the second constraint:

A further constraint needs to be introduced to solve for a, b and c. Let K be a matching value so that 0.5<K<1 in the following expression:

K in Equation 5 effectively describes the shape of the curve in Figure 2.

Figure 2. Delivery Ratio as a function of Sediment Loading Rate 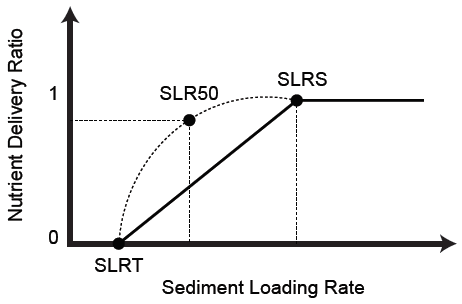 The constant b can be obtained by substituting Equation 9 into Equation 7.

Evaluating a, b and c using initial estimates of K

Taking the initial estimates of:

and the initial estimates of K(total phosphorus)=0.8 and K(total nitrogen)=0.7 in Equation 10:

These initial estimate functions are plotted in Figure 3 and Figure 4. 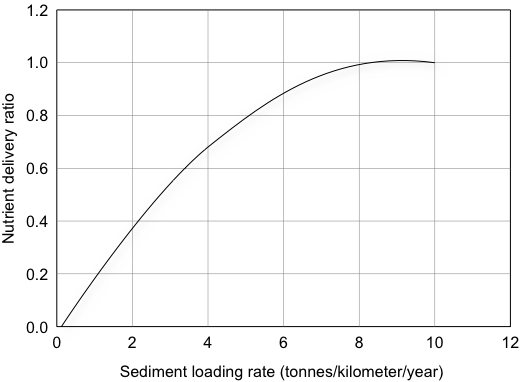 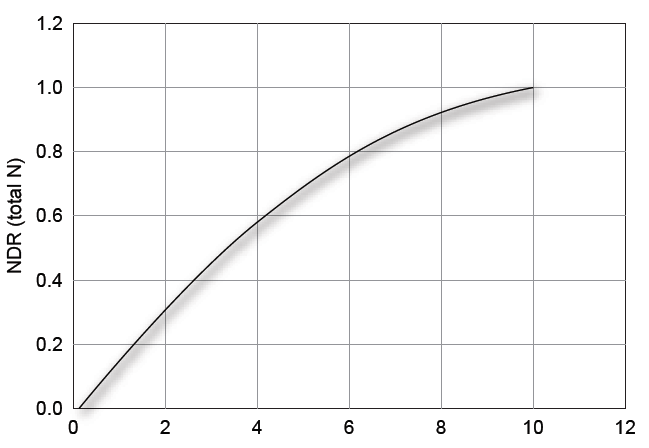 Data for the SLRT, SLRS, SLR50 values are required, for which the model linearly interpolates between these values to determine the output loading rate.

A time series of nutrient or solute load.