Ownership functionality is required in Source for modelling river systems that span multiple states, countries or types of users, and also systems using capacity sharing schemes. Terminology related to ownership is defined in the list of definitions under Structure and Processes, below.

Source can model water ownership throughout river systems, allowing modellers to track how much water a particular owner has in a system and where that water is located. Source also models cases where the ownership of water is exchanged. An example of this is when one or more owners have insufficient water to meet requirements, and so "borrow" water from one or more other owners that have water surplus to requirements. The volume borrowed/lent is tracked in a set of accounts and may be paid back later, either within a specified reservoir, or anywhere in the river system. Owner borrowing/lending is central to water ownership modelling in Source to ensure the optimum use of available water. The ownership functionality interacts with other water management features available in Source, such as Resource Assessment Systems.

This version of Ownership modelling has been developed by eWater CRC for Source.

Ownership has been modelled in predecessors to Source, such as IQQM, MSM and REALM, for many years. The concepts in these models have been updated and enhanced to suit the needs of Source.

Ownership must be enabled for the modelling scenario.

The following assumptions are applicable to modelling Ownership:

The Murray River and Border Rivers systems are the two major capacity sharing schemes currently in use in Australia: these schemes operate at the interstate level. The functionality for modelling ownership of water in Source is intended to meet the requirements for modelling these two schemes. There are three key documents describing the capacity sharing arrangements, and these are:

In both systems, the participating States (as discussed in the Overview, above) are entitled to a defined portion of the inflows to the system. The Murray has a system for water accounting explicitly defined that allows for ownership to be accounted over an arbitrary time period. In contrast the Border Rivers system does not have an explicitly defined accounting system, instead an approach is used that accounts for ownership in retrospect.

The main properties of ownership described in the Murray Darling Basin Agreement have been incorporated into the design of the functionality for modelling Ownership in Source. It is expected this functionality can be adapted to modelling the Border Rivers System (but not replicating the current approach, for which modelling of ownership would not be needed).

Enabling and disabling of ownership functionality

Tracking water ownership enables modelling of the sharing of a common water resource between two or more independent entities. Not all river systems require this level of complexity when being modelled; consequently, a mechanism for enabling and disabling ownership for a whole scenario has been provided in Source.

Source models ownership using the concept of an "ownership system". If ownership is enabled for a modelling scenario, the scenario will have one or more ownership systems. Each ownership system consists of a set of owners (with each owner having its own Resource Assessment Systems and water use accounting systems), and Borrow and Payback systems (allowing borrow and payback between owners). The rules associated with these entities apply within the physical boundaries of the ownership system.

Orders are placed at various locations in the model network for a particular owner’s water. When the ordering system examining the model network encounters an ownership system boundary marked by a Transfer of Ownership node, it will either: not pass orders upstream of that point, or transfer orders between the downstream and upstream owners, according to rules defined at the node.

When ownership is turned on (enabled) for a modelling scenario, Source tracks and reports owner shares of flow and storage volume throughout the river system.

The initial ownership of water at each node and link is specified by the modeller as data input, noting that owner shares must add up to 100% of the water at each location. Throughout a model network, ownership of water is in general conserved, unless it is explicitly transferred via user settings (available at some node types). Ownership transfer may also occur via borrow and payback, or in special cases within reservoirs, for example when owners have insufficient capacity to store their water.

To track ownership, Source creates a number of control volumes around nodes and routing links. An "ownership continuity equation" accounts for the volumes of ownership entering, leaving, and residing within the control volumes. The general form of the equation for a given owner, o , is:

Some terms in this equation are not relevant at all model nodes, and can be replaced with zero. The storage node, representing a reservoir has a modified equation that splits outflow into spills and releases, and includes some extra terms (see the entry in this guide for Ownership in Reservoirs).

While ownership is continuous and conserved, an owner’s proportional share of water at a location will change due to the effects of the various fluxes. For example, at a Supply Point node, different diversion volumes may be assigned to each owner, changing the respective owners’ downstream shares of flow. Specific forms of equation 1 and its application to each model component are discussed in detail in specific sections relating to their ownership in this guide.

In some cases, both the flux and each owner’s share of it can be specified by the modeller via time series input, a fixed percentage or a function. Examples include the inflow flux at an Inflow node, the routing link’s "Time Series Flux", and Supply Point node diversions (extractions) when connected to a "Non-Account Sharing" water user (see the eWater glossary). Alternatively, the Diversiono flux can be specified indirectly by the modeller using a Resource Assessment System, as is the case for extractive supply points connected to "Account Sharing" water users.

Some owner fluxes result from physical limitations. For example, at a Storage node, each owner owns a fixed share of the total storage volume they can fill with their water. Once an owner’s share of the storage volume is fully utilised there can be "internal spilling", where the owner’s excess water is distributed between other owners. This is treated as a flux in the ownership continuity equation.

In Source, ownership can be transferred at specified locations according to user configuration. This type of exchange may occur:

To ensure the maximum use of the water resource available, Source may automatically transfer water ownership using Borrow and Payback systems. If one or more owners has surplus capacity or water, they can lend this to owners with a deficit. This "borrow" of water can occur at any node where there is a loss or gain, and results in the ownership of the borrowed water being transferred from the lender. If multiple owners need to borrow, and there is insufficient water or capacity to meet their combined requirement, a configured Distribution System is used to determine priority of access.

All borrow is tracked using a set of accounts in a Borrow and Payback system. Borrowing owners may payback their debt by transferring their water to the other owner, either in a specified "payback" storage or indirectly via Resource Assessment Systems. When this happens, the accounts are updated. Payback can either occur immediately or at a later time. This process is described in more detail in the Borrow and Payback - SRG section of this guide. Borrow and payback is applied in a range of situations - from sharing outlet or channel capacity so orders can be met, to maintaining fixed owner shares of reach dead storage.

Owners may have one or more Resource Assessment Systems (RAS) managing their water. RAS must be explicitly created by the modeller (they will not be created by default), as there are widely varying types of these systems, and they are not necessarily associated with any owner. RASs must be created and configured via the Resource Assessment Explorer. The Ownership Explorer may be used to view ownership details of RAS associated with an owner.

During the model initialisation phase a full check for ownership system consistency for the entire model network is undertaken, which entails examining every node and link. The rules of ownership consistency are as follows:

If an inconsistency is found, an error message is generated and the model run is stopped.

In the ordering phase for systems with ownership, orders and off-allocation requests for each owner are placed. These orders and requests may be limited by the owner’s ability to deliver (ie their share of storage, release capacity, losses and other constraining factors).  More information on the ownership calculations for this phase is available in Rules-Based Ordering - SRG.

When ownership is enabled and an accounting system is linked to an owner, only the selected owner’s share of the water in the storage will be considered available for distribution. 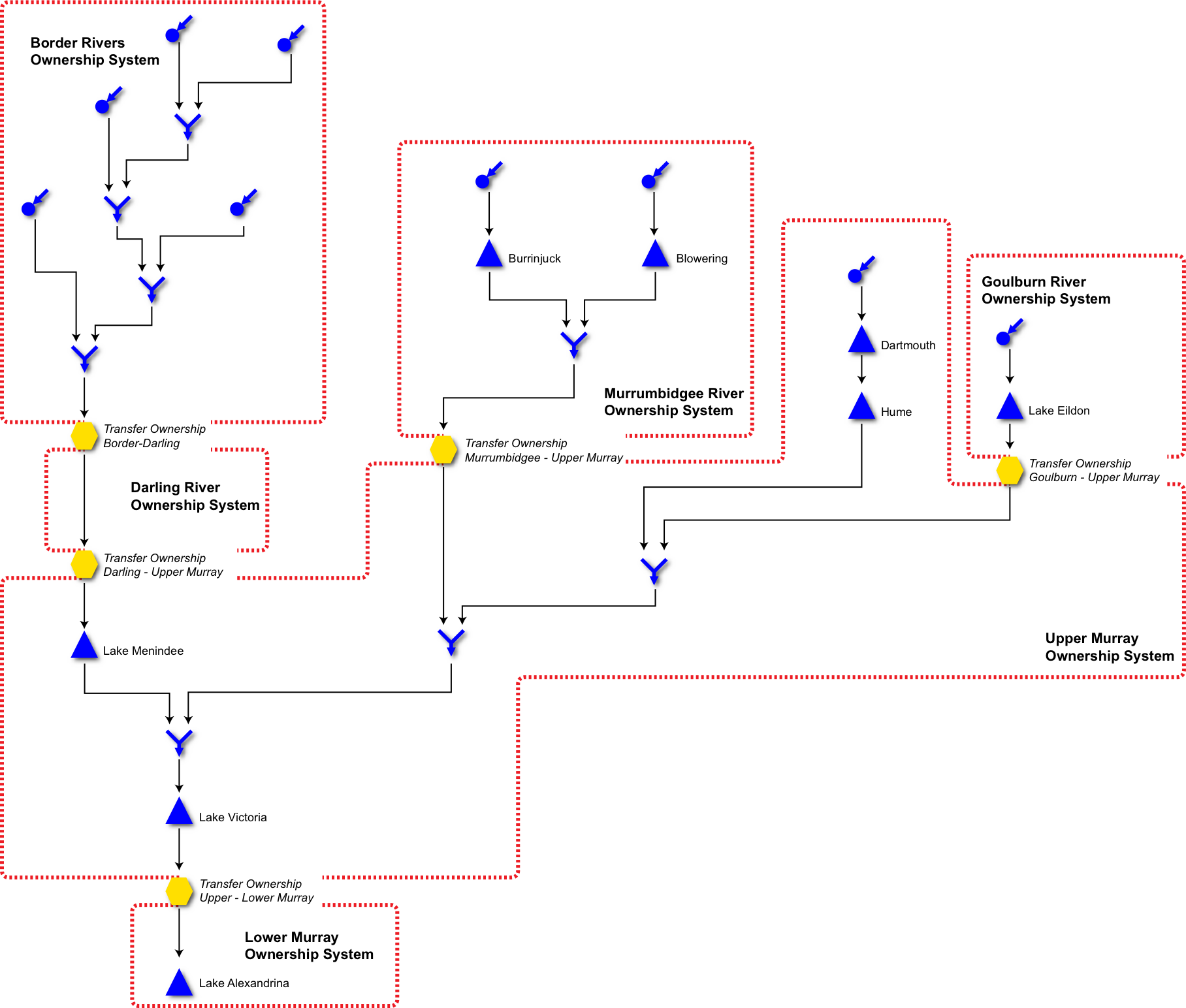 A global borrow and payback system and default distribution system was automatically created when each ownership system was defined. Local borrow and payback systems have also been configured for the Upper Murray Ownership System (Hume Dam, and Lakes Menindee and Victoria). Lake Victoria is the "payback" (or reconciliation) storage for this ownership system.

The NSW and Victorian Resource Assessment Systems are used to allocate their owner’s water resources to their respective licence holders within the boundary of the Upper Murray Ownership System.

Details on data requirements are provided in the Source User Guide.

Ownership System parameters and settings are summarised in Table 2.

1. This is a loss sharing method used in the Murray river where below a threshold losses are shared according to fixed ratio, and above the threshold they are shared proportionally. For more information see the section on Ownership at nodes and links - SRG and the entry on the Splitter node - SRG.

2. For more information see the section on Ownership at nodes and links - SRG.

3. For more information see the section on Ownership at nodes and links - SRG and Gauge node - SRG.

4. This is the amount of water in excess of orders and off-allocation requests required to meet downstream requirements, due to the physical limitations of each channel at an anabranch (represented by the Splitter node - SRG).