Skip to end of metadata Go to start of metadata
This feature is not available in Source (public version).

This section describes how to configure ownership at each of the nodes and links in Source.

Ownership information is required at splitter nodes to determine the proportion of each owner’s water to be directed to each outlet (as shown in Figure 1). Ownership of unallocated flows from a splitter can be distributed according to owned amounts or by selecting different proportions to the owned amounts. The following parameters are optional: 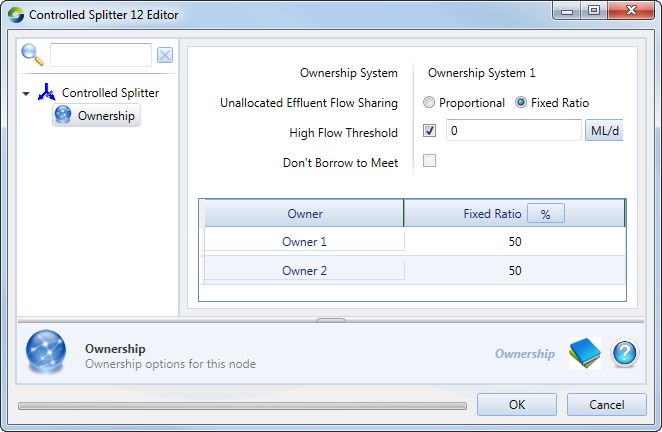 For the Gauge node, you must specify the sharing method (either as percentage or a unit share) and whether ownership must be reset using the Reset Ownership checkbox (Figure 2). 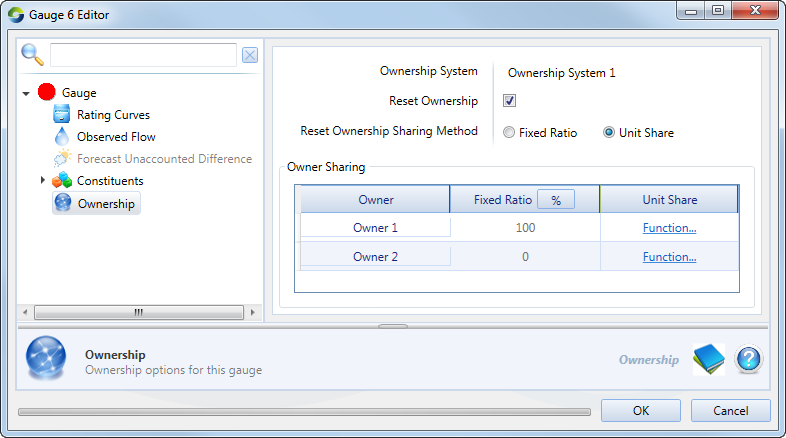 The Sharing Method is a volumetric entitlement for sharing water amongst owners (Figure 3) as either a proportion (by selecting Fixed Percentage) or as a function (by selecting Owner Flow Function) using the Function Editor. In the former, the proportion refers to a percentage of the total for all owners. For example, if Owner 1 is allocated 60 and Owner 2 is allocated 50, the first owner's proportion will be a percentage of the total proportions (ie.60/(60+50))%. 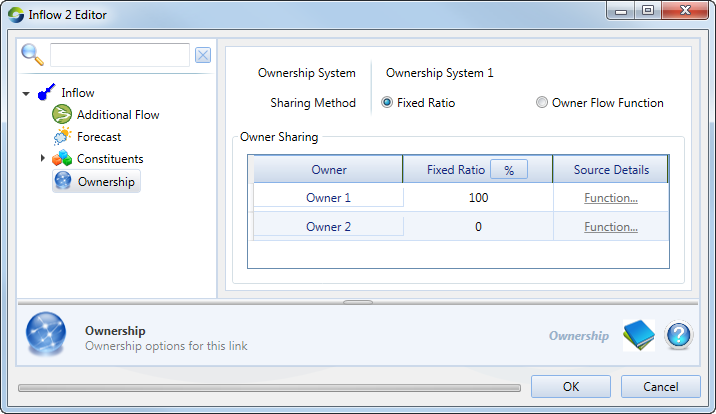 Note: All proportions cannot be allocated zeros at once.

Click the Ownership tab in the node’s feature editor (Figure 4) to choose the sharing method and specify the proportion for each owner. The High Flow Threshold checkbox refers to the threshold above which high flow losses occur, for which you can specify a threshold flow rate. 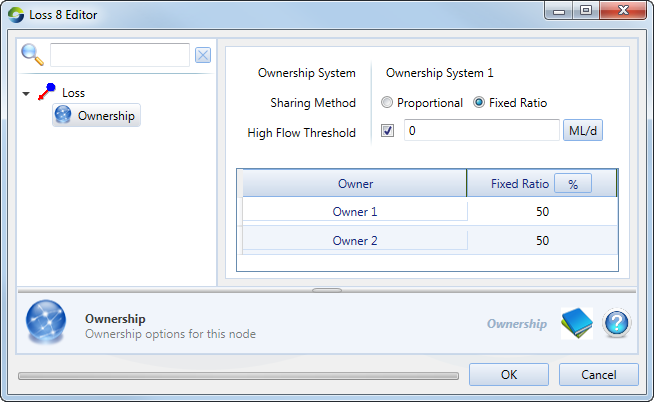 Specify the maximum order constraint via a function using the Function Editor. Also include the proportion for each constraint/owner sharing level (Figure 5).

If there are multiple owners, the additional orders to meet minimum flow requirement (or total shortfall) are shared according to the owners' share of the minimum flow requirement.  That is, the orders for each owner will increase by their share of the Minimum Flow Requirement - Owner's Downstream Orders (or owner's shortfall).  The minimum value an owner's shortfall can be is zero, so if their share of the Minimum Flow Requirement is less than their Downstream Orders, the total owners shortfall will be less than the total shortfall.  In this case the owner's orders will be increased by the Owner's Shortfall / the Total Owners Shortfall x Total Shortfall - a larger amount.

The owner's share can be specified as Proportional (shared equally) or Fixed (enter the proportion for each owner in the Minimum Order Sharing table of Figure 6). 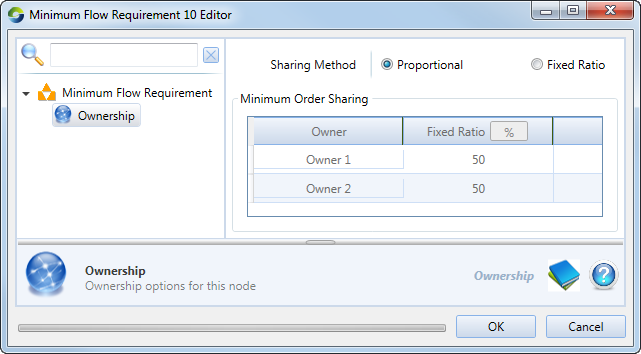 Each owner’s share of water is conserved at a storage node where ownership has been enabled except when:

An owner’s volume of water in storage is adjusted for their share of inflows, regulated releases, external and internal spills, lateral losses and gains, and flows along wetland links. Inflows may be from upstream or wetland links. Regulated release ownership is determined by each owner’s downstream order.

Using Figure 7, you can choose which owner will be assigned 100% ownership of the storage, its inflows, losses/gains and releases when ownership is suspended using the Override Owner drop-down menu. When conditions in the specified function are met, the ownership system will be suspended. You must also specify each owner’s share of the storage capacity, as well as the initial share.

Lateral losses and gains include rainfall, evaporation and groundwater infiltration. These fluxes are categorised into those that are shared in proportion to the share of water stored, or according to a fixed ratio, which can be configured (as shown in Figure 8). This window is the same for Rainfall and Evaporation, and is similar for each of the Outlet Paths. An additional parameter you must specify is the distribution system that the link falls in. 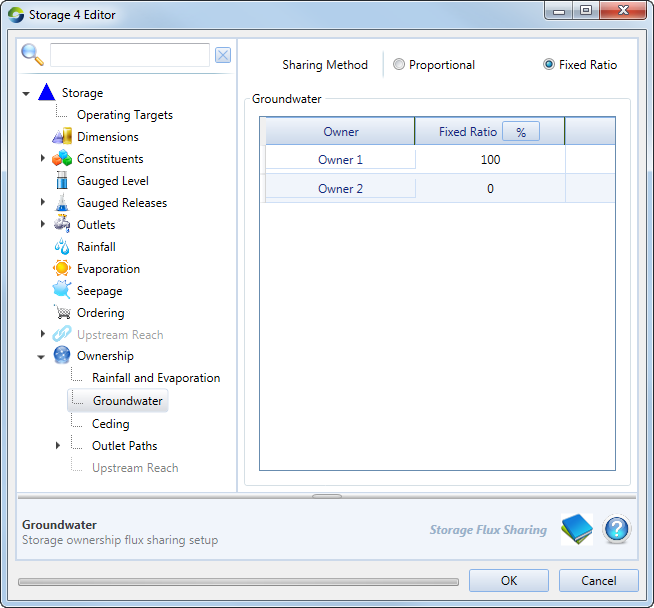 To enable ceding amongst owners, select Ceding in the hierarchical list. Click Add Cede in the right-side panel, then enter the ‘from’ and ‘to’ owners that will be involved in the ceding process, as well as a function for the volume of water to be shared (as shown in Figure 9). 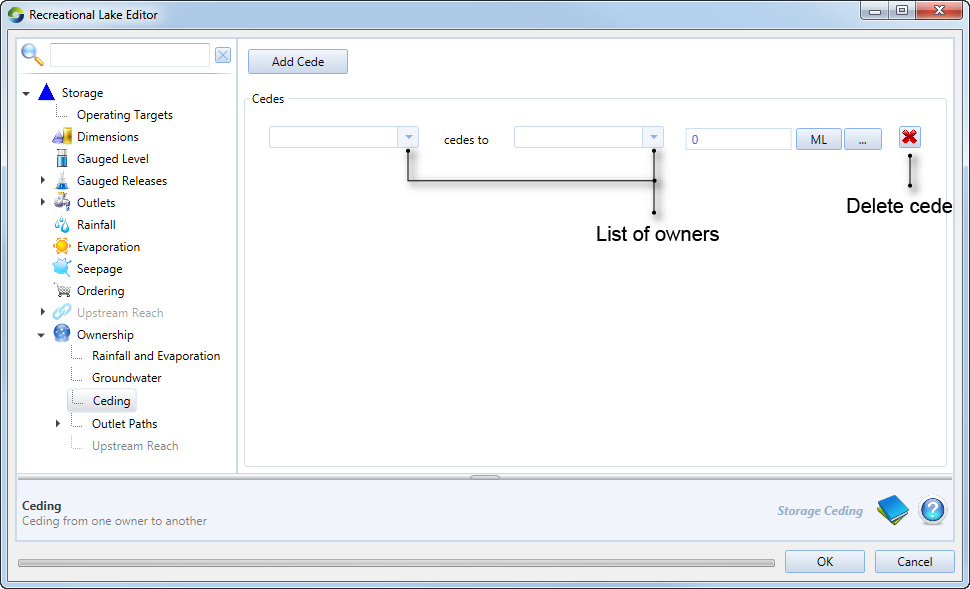 At this node, the total upstream owner constraint volumes are transferred to downstream owners in specified proportions (as shown here). It can be configured as either a boundary or an in-system node. Refer to Transfer of ownership node for details.

The Borrow and Payback system works so that the owners' flow best matches the proportions of their orders and tracks their borrowing. Extracted volumes are restricted to the owners' flow at the supply point and their capacity to meet their downstream order. Each owners' relative shortfall is not calculated based on a proportion of the overall shortfall, but rather the individual owner's ability to meet their own orders. 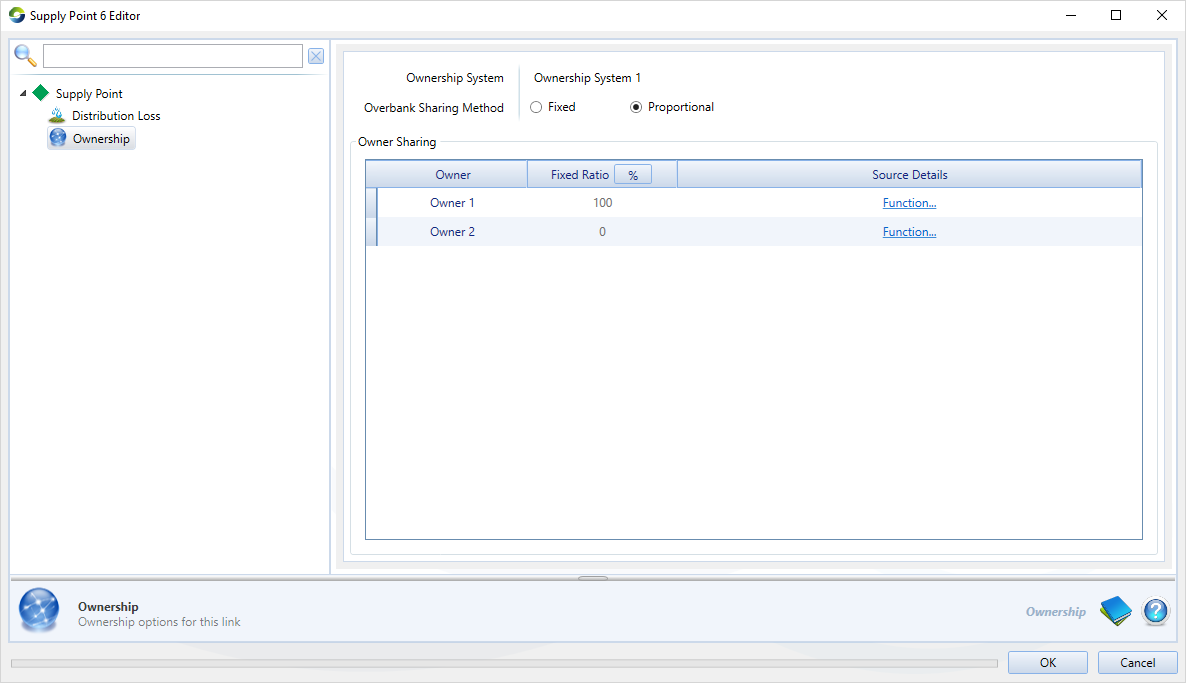 The water user node represents a demand in the model, where orders are generated and passed upstream. Figure 10 shows the proportions distributed and returned that must be specified for each owner, when non-account sharing has been selected. 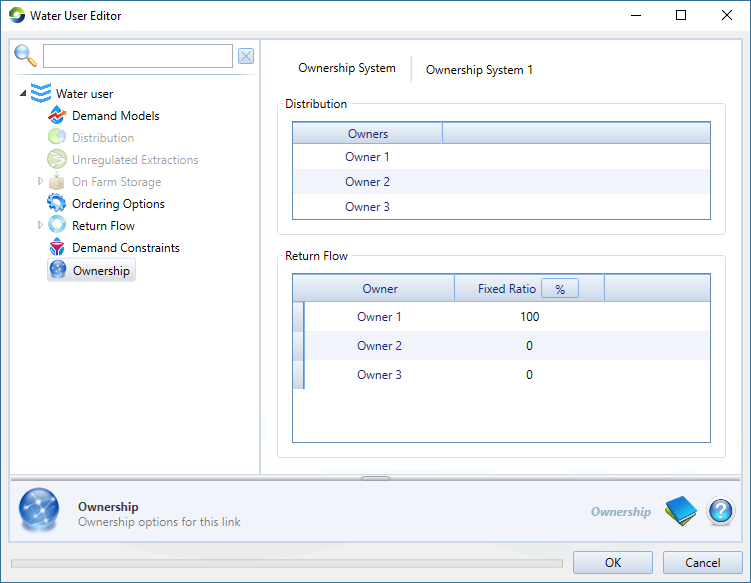 The intention of ownership at links is to define which owner is responsible for fluxes that occur on links. This is available for lagged flow routing and storage links.

This dialog allows you to specify what proportion of catchment inflows are allocated to each owner. Enable the Override Catchment Inflow Proportions checkbox and specify the proportion in the table below. 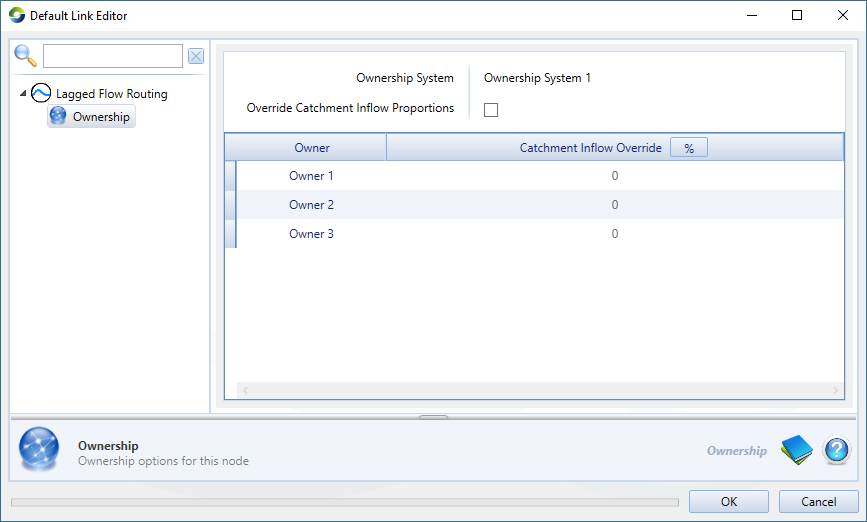 These fluxes are defined as a function using the Function manager. Each link’s ownership system will always match the one for the upstream connected node. You can specify what proportion of flux to allocate to each owner using the checkboxes shown in Figure 12. Once enabled, specify the proportion in the table below.