The Power Function is a constituent generation model that fits a rating curve describing the relationship between constituent concentration or load and discharge. Two configuration options are available:

This model is a catchment scale model, but can be used at a regional scale if only applied to a single sub-catchment.

Widely used in modelling and discussed in the scientific literature. For example see Phillips (1999); Asselman (2000); Horowitz (2003).

A common problem in hydrology and water quality investigations is the absence of water quality data to establish a relationship between solute concentration load and discharge. In the absence of actual sediment or solute concentration (SSC) data, the simplest and most basic analysis is to fit a smooth rating curve (or transport curve) to estimate sediment or solute concentrations for flux calculations. Although there are more than 20 methods for developing rating curves, the most common is a power function (regression) that relates SSC to water discharge, with the discharge measurement constituting the independent variable (eg. Phillips et al. 1999; Asselman 2000). This generally requires the log-transformation of SSC and discharge data prior to the analysis. The motivation for the use of such power functions includes their flexibility and their relative simplicity.

The Power Function (Equation 1) is fitted by adjusting the values of the parameters A, B and C to minimise the sum of the square of the residuals between the rating curve and observations. The units of concentration are mg/L, and the units of flow may be either ML/d or mm/d, depending on which form of the equation is being used..

A the coefficient, represents the slope of the curve if plotted on semi-log axes. 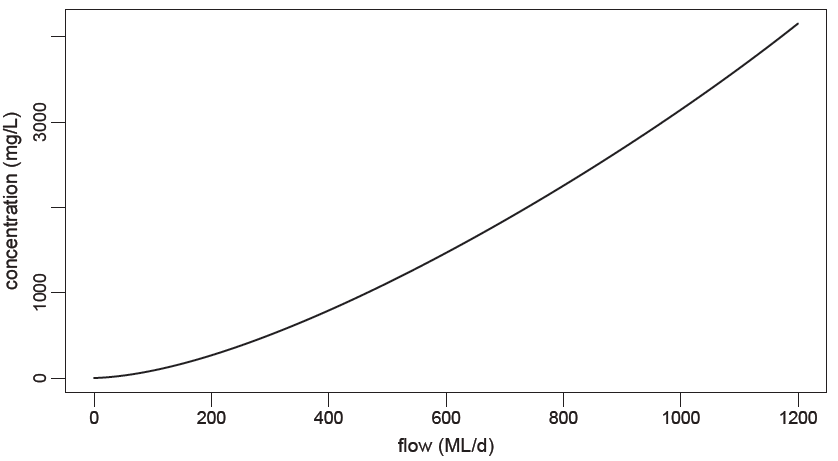 However, the power curve function that uses Flow in mm (Flow in ML divided by FU area in km2) to derive the A, B and C parameters can be applied to all FUs upstream of the node from which the flow and solute concentration has been measured. This configuration removes the dependency of area on the relationship derived between flow and solute concentration, as the flow calculated in mm at the end of a sub-catchment will be relative to the flow calculated at a FU.

A is the slope of the curve of concentration vs runoff in mm.

Values for parameters A, B and C and the maximum concentration of the constituent.

The parameters for this model are summarised in Table 1.

A time series of daily load in kg per time-step.