A scenario is the representation of a node-link network in Source. The relationship between a project and a scenario is shown in Figure 5. 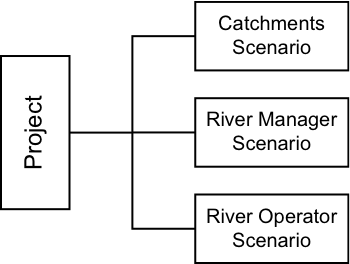 A scenario describes the major processes in a river system or catchment that are modelled. This includes catchment and sub-catchment definition, rainfall runoff and constituent generation models, data sets and parameters. You can create multiple scenarios to:

Any change to the definition of sub-catchments, node-link network, FUs, or the models within FUs, forms a new scenario. Similarly, a different set of inputs or parameters can be used to set up a new scenario, such as a change in land use or a climate change.

To create a new project, do one of the following:

You can only have one project file open at a time. Do not try to open the same project file using more than one copy of Source because you may lose your work.

In the resulting window (Figure 1), enter the following: 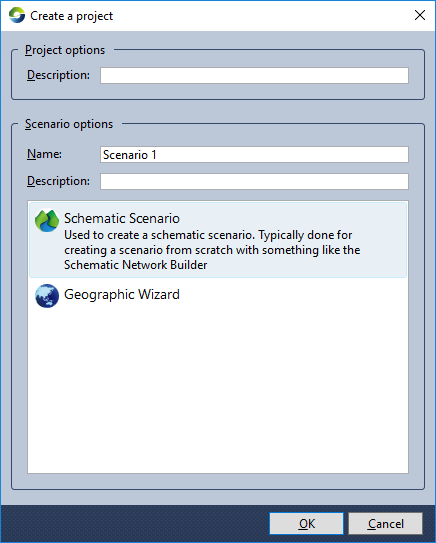 To close an open project, choose File » Close project. This closes the current project and prompts to save your work (Figure 2). Click the appropriate button.

To open an existing project, either:

This opens the standard Windows™ open dialog (Figure 3). Note that opening a new project prompts you to save any open project. 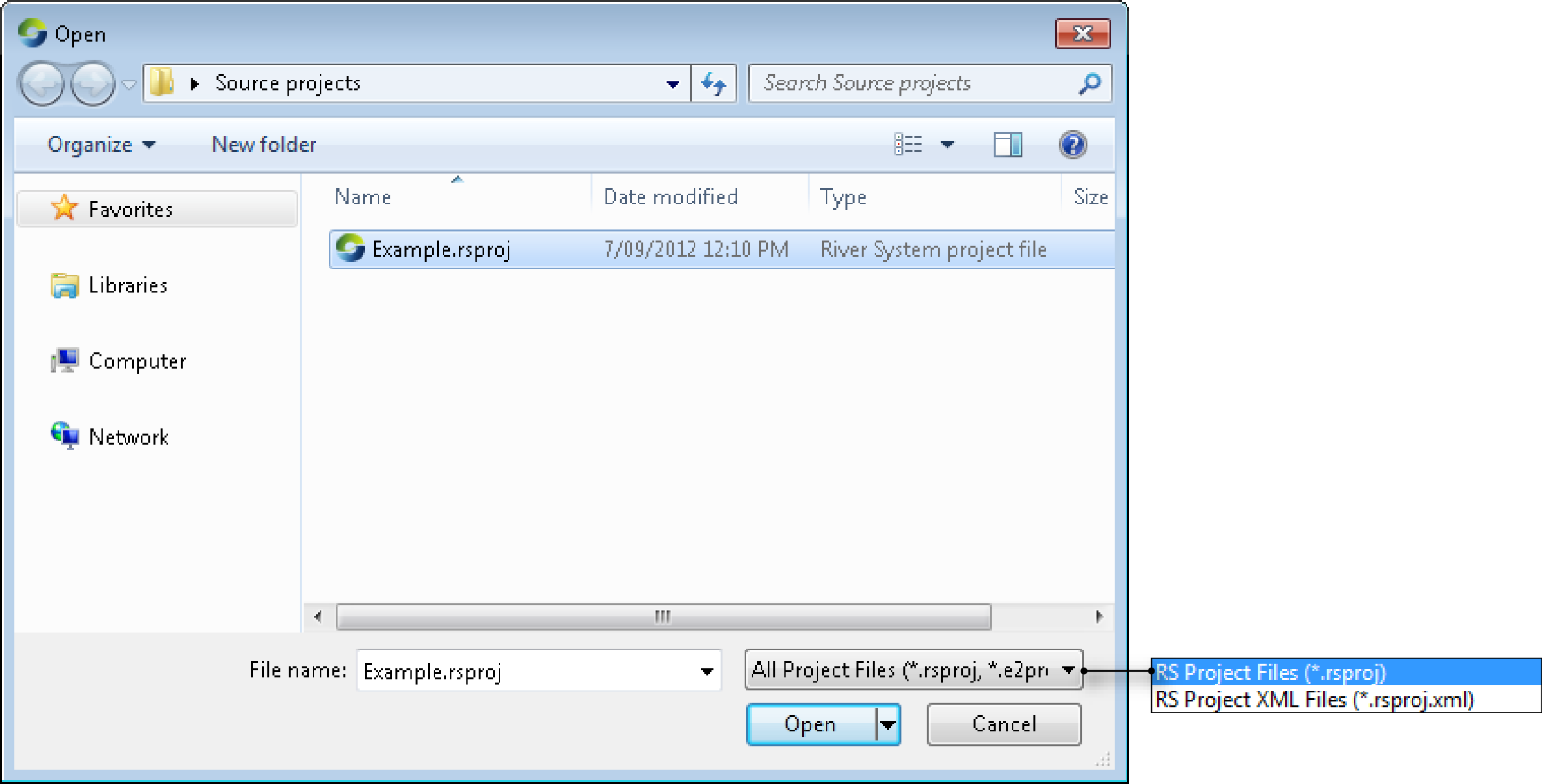 Three scenarios have been described in this guide:

It is important to choose the correct type of scenario before you start building your model. Although a project can contain several scenarios, a scenario type is fixed once it is created and cannot be changed later. Note that scenarios are independent of each other; a change in one scenario does not impact another scenario.

The operations described for a project (above) are also available for scenarios. In addition, you can also import and compare scenarios.

Note: The Scenario Import and Scenario Difference tools can only be used for scenarios that have been created in the version you are currently using, or in previous versions.

Various menu items allow you to manage scenarios at a high-level.

Note: You can only create a schematic or catchments scenario using the method outlined below. To create a forecasting scenario, refer to Creating a scenario.

A project must contain at least one scenario. Whenever you create a new project, you are also prompted to create a scenario. You can create additional scenarios using any of the following methods:

Note: You must upgrade a project if it was created in Source v3.1.0 or earlier. If you open these projects in later versions of Source, an error message (shown in Figure 4) will appear prompting you to save in v3.1.0. Follow the steps outlined in the dialog to automatically upgrade the project to the current version of Source. 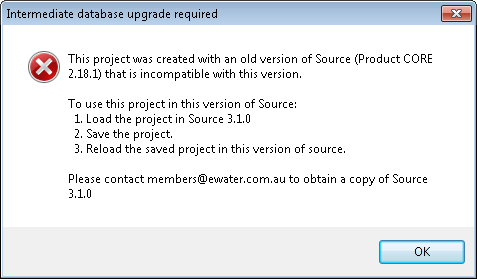 You can duplicate existing scenarios, provided they are part of the same project. You may want to do this if you wish to experiment with variations without affecting your original scenario.

To duplicate a scenario, click Copy Scenario on the Project Explorer toolbar. Source makes a copy of the current scenario and asks you to name the copy (as shown in Figure 5). You can either accept the proposed name or supply one of your own. Keep in mind that scenario names must be unique within a project.

The new (copied) scenario will be a duplicate of the original at the time of the copy.

Source automatically gives new scenarios the default name of "Scenario #n" , where n is a number. To rename a scenario:

You can link two scenarios using a Connecting Models. Note that some components of the first scenario may not pass on to the second, linked scenario.

The full version fo Source has functionality for determining the difference between scenarions. For more information please see Troubleshooting and Debugging.

When copying a partial scenario, the effect on each network element is different, see Nodes and Links - Copying and pasting.

The audit log keeps track of the changes made to a project over time. This is particularly important for projects that are worked on by multiple people.  It contains a combination of software generated information on model changes and provides an opportunity for users to annotate the purpose of those changes with a commit message when the project is saved. 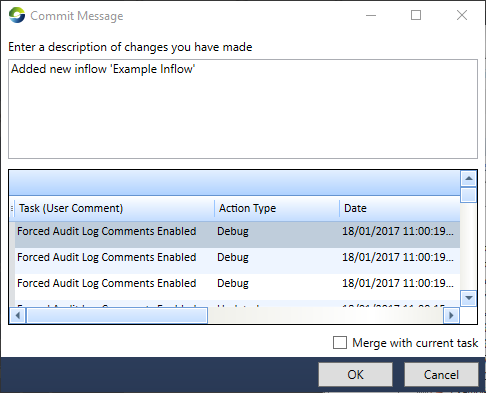 Commit messages are used to group software generated logs in a way that makes sense to users working on the project. If the same issue is being worked on in multiple concurrent sessions, you can select Merge with current task to group the logs under the previous commit message. 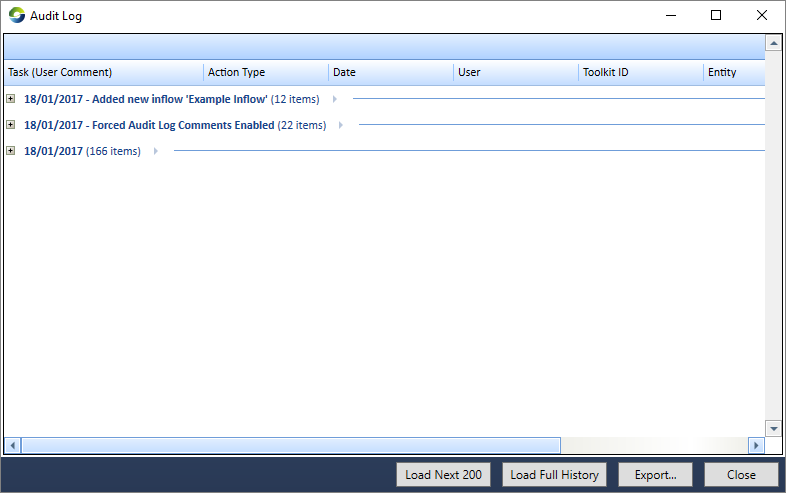 A large audit log attached to a project can become a processing burden, especially in the case of large projects. Audit logging is on by default, but can be disabled in Edit »Project Options» Audit Log Settings by toggling off Enable Logging.

Click Clear Audit Log to delete all existing entries in the audit log. This can be useful if you have finished one stage of modelling (eg. building your model) and now want to monitor the changes made to the project from this point forward. Before clearing the log you can export the existing entries by opening the Audit Log Viewer (select View » Audit Logs...), right-click on a cell and choose Copy All and paste contents into a text file or Excel file.
It is possible to permanently turn on the audit log, by toggling on Force Comment on Save. You will no longer be able to toggle Enable Logging, and Clear Audit Log will also be disabled. This is a permanent project change, and you will recieve several warning messages asking you to confirm before the change is made.
Overview
Content Tools
{"serverDuration": 172, "requestCorrelationId": "bf74774565934cae"}