A Source model is a simplification of the real world, and uses certain conventions to represent important characteristics of the system being simulated. Key features include:

Source uses a node-link style modelling system for generating, transporting and transforming water and constituents within the major channels in a catchment (see Figure 1). Note that not all streams can be modelled, so you must decide which ones are important for a particular application. In urban applications, the basic Source features (nodes, links etc) can be used to create the functionality to model systems such desalination plants andstorm water harvesting applications. Details are provided in the User Guide. 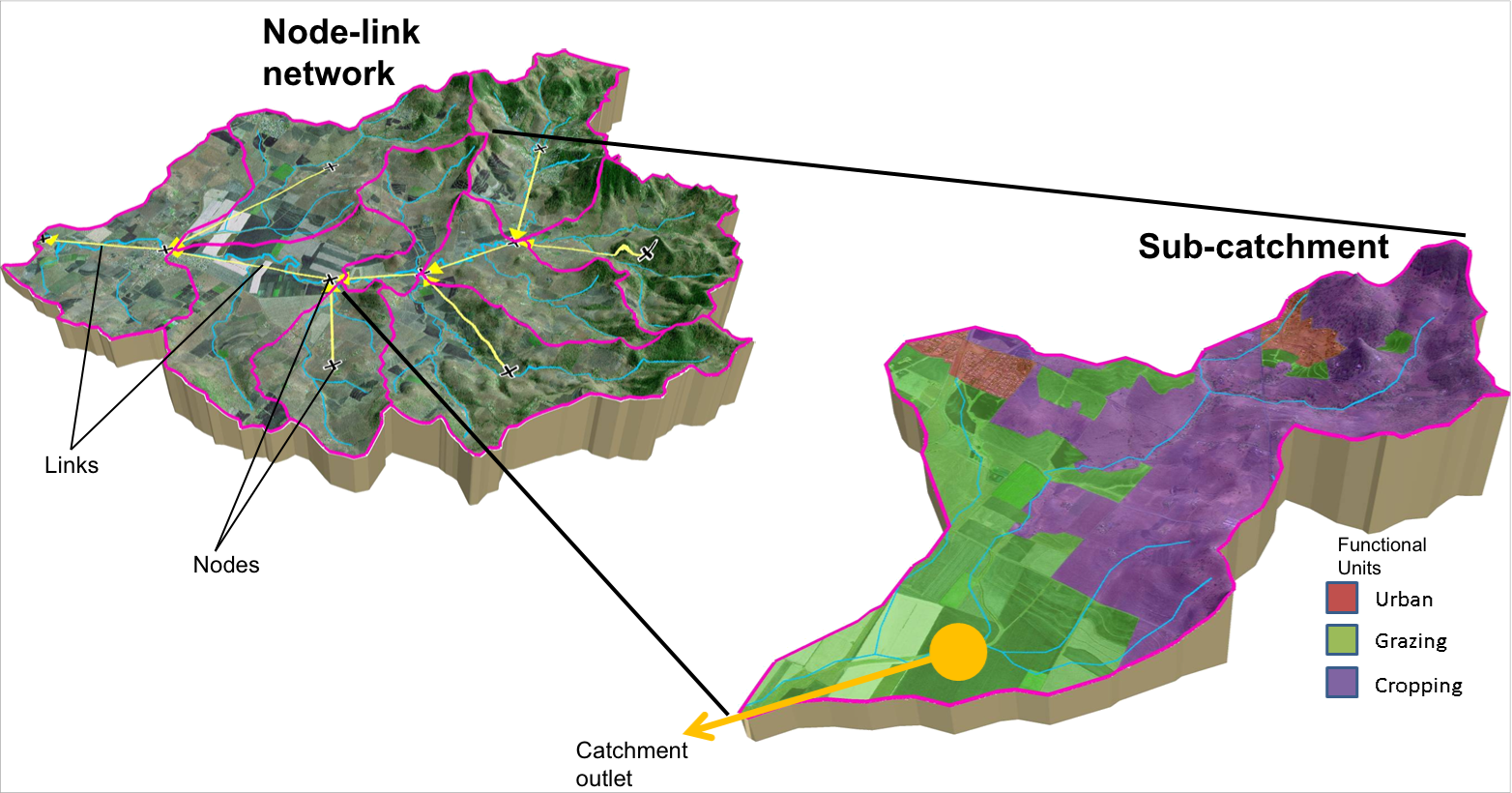 In Source, flow refers to water moving through a node-link network (from sub-catchments, through links to an outlet). Source can be used to predict flow at defined points in a river network, operating down to daily time-steps and reporting at daily to monthly to decadal scales.

A constituent is a material that is generated, transported and/or transformed within a catchment. Constituents commonly include sediments, nutrients, contaminants (eg pesticides, heavy metals), pathogens and other water quality properties. Constituent generation models govern the way constituents are generated within a Source model. This may be static or time-varying and could be a function of flow or other variables.

A catchment is the entire area of interest that is being modelled. The first step in modelling is to divide a catchment into sub-catchments. Sub-catchment boundaries can be determined based on stream topography and landforms calculated from a Digital Elevation Model (DEM), or through the analysis of topographic maps.

Catchment analysis is dealt with in detail in the Working with catchments scenarios section and the Spatial data pre-processor. Figure 2 shows an example of a node-link network, which is made up of several sub-catchments.

A selection of sub-catchments will determine the location of the nodes in the node-link model, so sub-catchments need to represent the major sources of water inflows and nutrient inputs. In Source, a sub-catchment is the area flowing into a node. There is no explicit representation of a stream network or surface routing within the sub-catchment.

Sub-catchments are divided into areas with a common hydrologic response or behaviour called functional units (FUs), based on various combinations of land use or cover (eg. forest, crop, urban), management, position in landscape (flat, hill slope, and ridge) and/or hazard (however defined). Figure 2 shows an example of this. 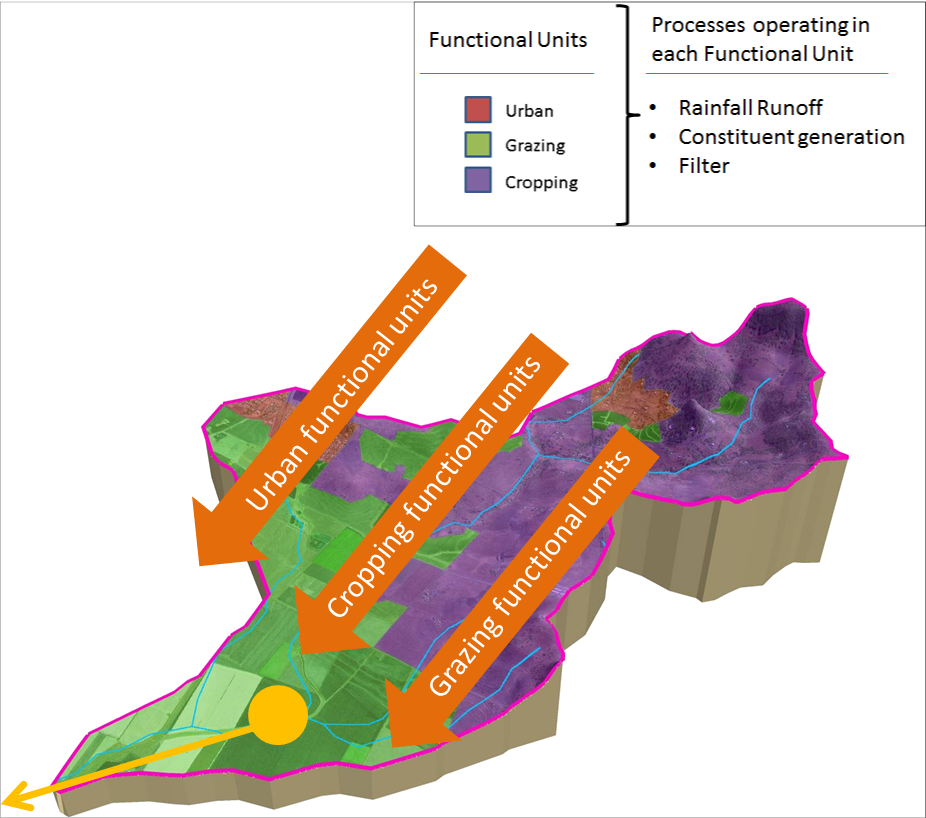 Three basic processes are defined to operate in a functional unit:

Each process is applied as a set of algorithms that deliver the resulting output to the sub-catchment node. The Scientific Reference Guide provides details on the models available for each.

The outputs from all the functional units within a sub-catchment are combined as inputs to the node for that sub-catchment. In this way,output is lumped at the sub-catchment scale.

Source also supports a split of flow and loads into notional surface (quick) and subsurface (slow) portions from each FU.

Nodes represent places where actions or measurements occur in a river system. For example water can be added, extracted, stored, recorded, or have a change in ownership. A node can be used to represent things that actually happen over a large physical area but which, for modelling purposes, occur at a single point, such as inflows from a catchment, or extractions from a group of off-takes. In sub-catchments, they provide a position in the catchment network where water management information, such as extractions and demands, can be placed. In Source, nodes are depicted using the icons shown in Figure 3.

Links represent river reaches but there are some important differences. A reach refers to a physical section of a river, while a link is a logical connection within a Source model. A link will sometimes be defined as having zero length (to conveniently represent certain processes), which is not possible for a reach. Links act to store water and route or process water and constituents passing between nodes (Figure 4). You can only connect nodes using links. You cannot connect two links to each other without an intervening node. Links also allow modelling of interaction with the floodplain.

In Source, links are depicted as lines with arrowheads indicating the direction of flow. Links allow modelling of several basic ‘processes’. Refer to this link for the different types of links available.