This section describes how to load time series data into Source and how to manually enter data in to tables. Additional sub-pages include:

Scenario Input Sets allow you to easily keep model structure, while switching between groups of input data and parameters.

There are two types of time series data inputs:

When time series data is loaded in to Source, it is referred to as a data source and is available throughout Source. To either load new data sources, or access previously loaded data sources, you can use:

Note: Data sources are scenario-specific. If you want to use the same data source in two scenarios, you must load them individually for each scenario.

Figure 1. Loading a data source from within a component's feature editor 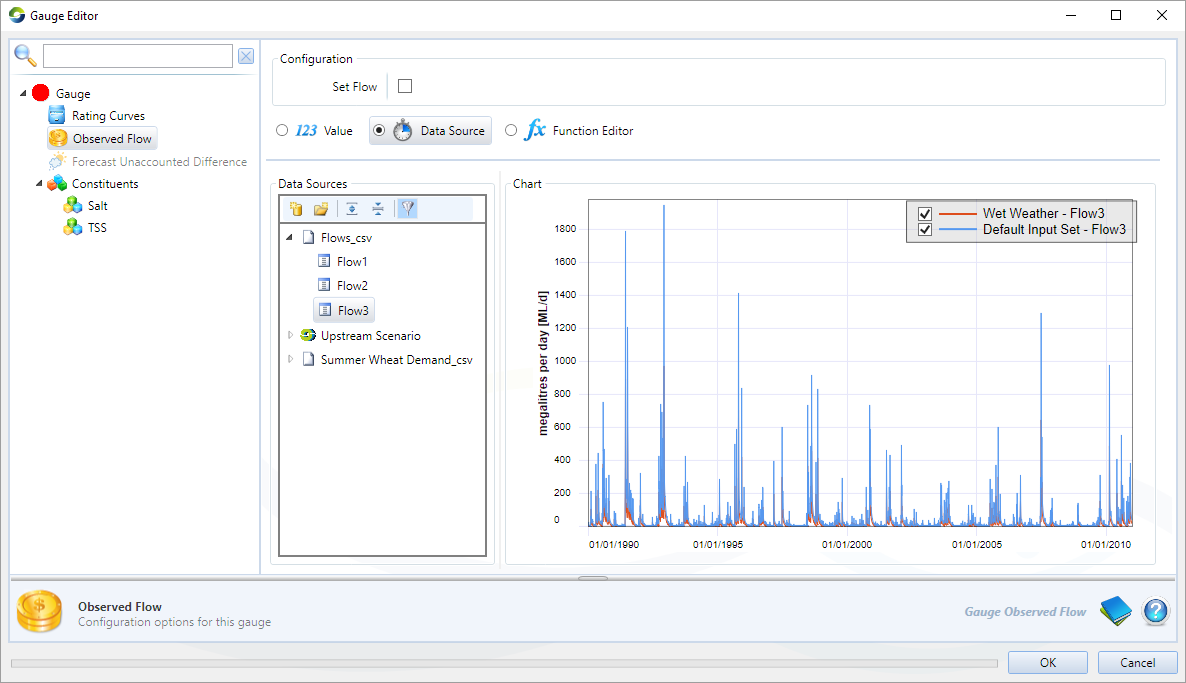 Source allows you to load and manage time series data at a central location using the Data Sources Explorer (Figure 2). Note that all data sources for the active scenario appear in the Explorer regardless of whether they were loaded using the Explorer, or one of the other methods listed above (eg. by using a component's feature editor, Figure 1).

Figure 2 shows features of the Data Sources Explorer containing all data sources available in the scenario, both from time series data files and another scenario. Additionally, the nodes that some of the data sources are associated with are shown. 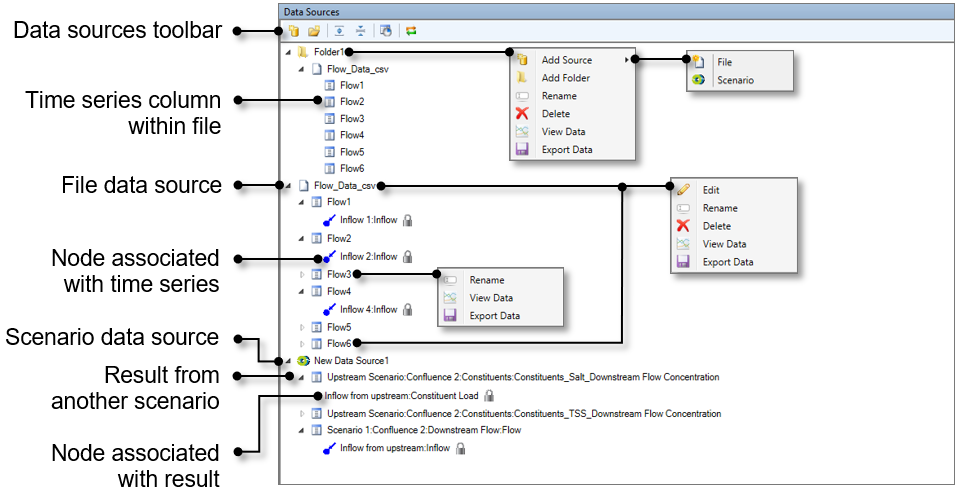 The contextual menu options allow you to: 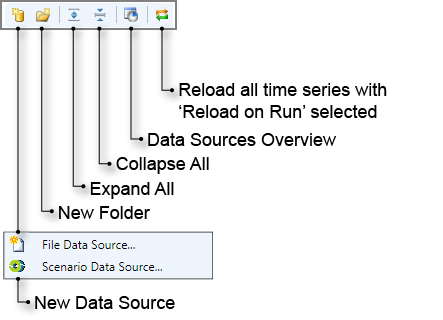 The Data Sources toolbar (Figure 3) has the following functions:

To load a time series data file, either:

Note: It is imperative that you specify compatible units for a time series after loading. If you do not, the time series will either not display in the Data Sources option of the component's feature editor or a run will provide incorrect results. The time series must be visible in the chart view to ensure that the loading process is complete.

Once a file data source has been loaded, it will be listed in the Data Source Explorer. Its default name is that of the associated file, with "." replaced with "_". Grouped underneath each data source are the time series columns you have selected to import from that file, with the names taken from the column headings in the file (if there are no column headings, Source will name them Column01, Column02, …). The data source and time series can be renamed by right clicking on the item and selecting Rename from the contextual menu. Like functions and variables, each data source must have a unique full name. Two data sources can have a non-unique name if they are in different folders because the full path to the data source is still unique (eg. Flows_csv in Figure 2).

You can only load the result(s) of scenario run(s). Therefore, ensure that the donor scenario has been run before you load the scenario data source into the acceptor scenario.

To load the results of a scenario, either:

This opens the Load Scenario Data Source dialog (Figure 6). Then:

Once a scenario data source has been loaded, it will be listed in the Data Source Explorer. Its default name is New Group1. Grouped underneath the scenario data source are the results you selected to import from the donor scenario(s). The data source and time series can be renamed by right-clicking on the item and selecting Renamefrom the contextual menu.

Once you assign a time series to a node or link, the associated component is shown underneath that time series (Figure 2). A time series can be disconnected from a component. 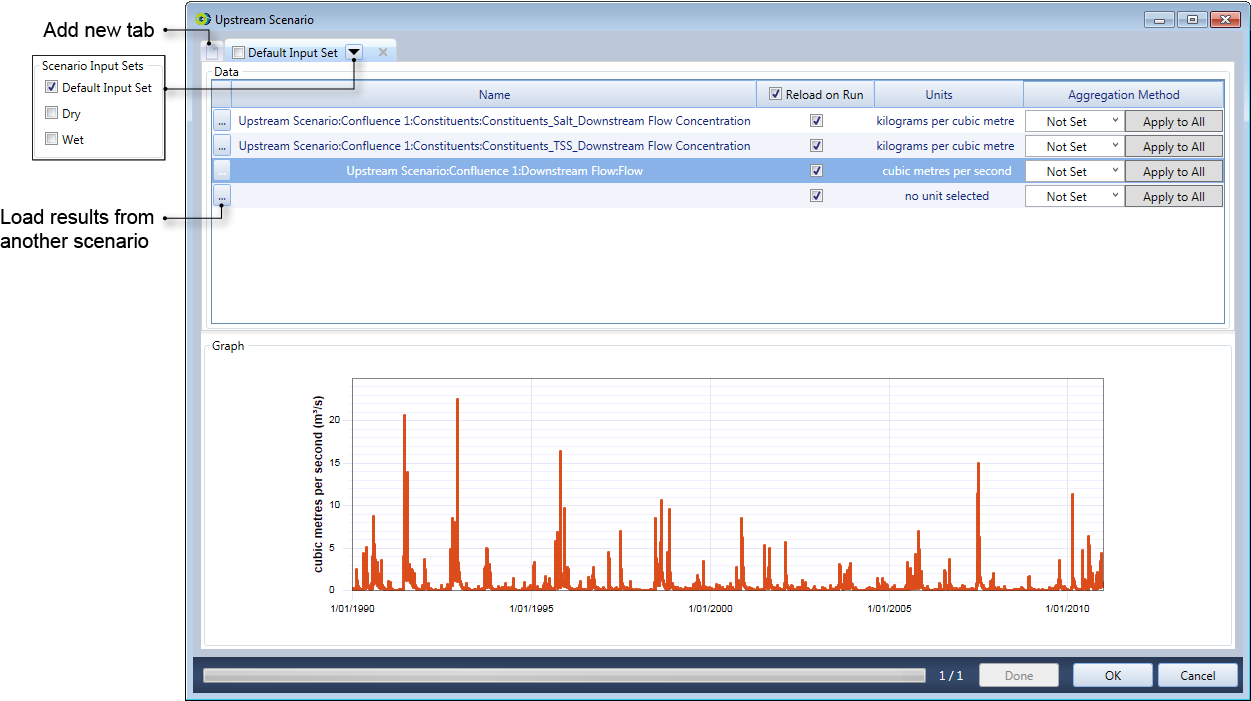 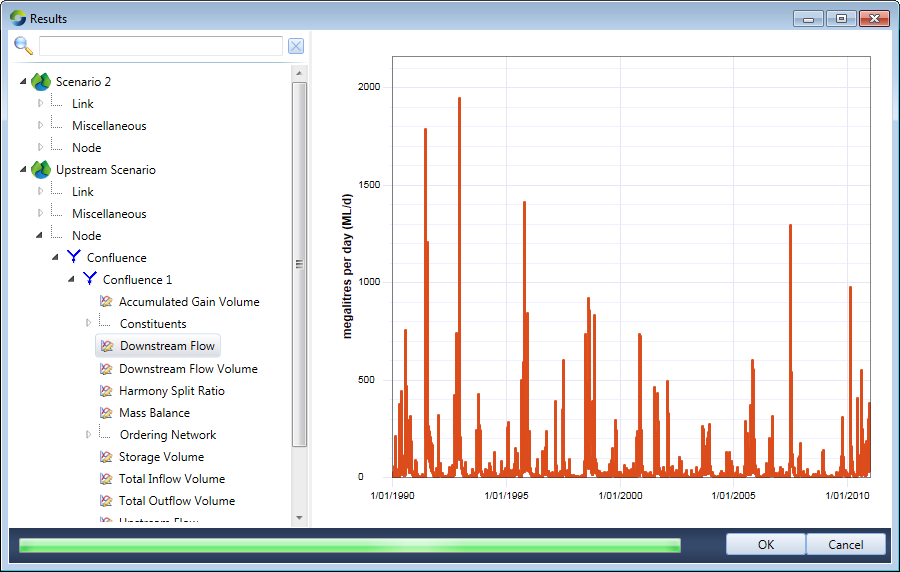 You can edit a data source after it has been imported to modify the options you selected during loading, eg. the associated scenario input set(s). In the Data Sources Explorer, right-click on the data source you wish to change, and chooseEdit from the contextual menu, and the appropriate Load Data Source dialog (Figures 5, 6) will re-open.

In many cases, there is a Reload on Run checkbox associated with the controls for loading data into Source. Regardless of whether the data source is a file or another scenario, when you first load a data source, it is loaded into an internal store.

When Reload on Run is enabled, and the Data Source is used in the model, Source will reload its internal store from the original source file each time you click the Run button. Therefore, for every run, your data sources must be accessible, that is:

Note: If the Sets if a failed "Reload on run" will stop the current run button in the Data Sources toolbar is enabled (it is shown enabled in Figure 3), and the data source cannot be found, the scenario run will fail. However, if this icon is toggled off, Source will continue to use the data in its internal store, regardless of whether the source file can be found or the source scenario has been run yet.

Assign a scenario data source to scenario input set(s) as explained for a file data sources, but use a new tab for each input scenario.

Once data is generated using the Climate data import tool, it can be used as a data source in the Data Sources Explorer, as shown in Figure 8. 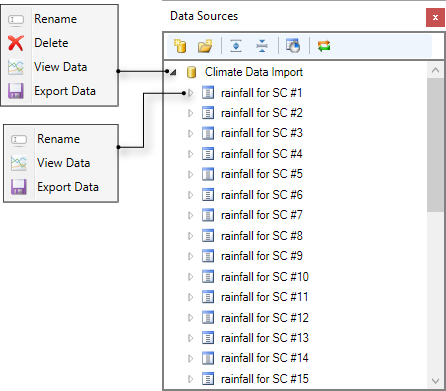 Some Source windows allow you to manually enter data into tables and view a graphical representation alongside. This holds for most tables across Source.

Follow the steps shown in Figure 9 to enter data into the table, one row at a time.

Additional shortcuts for entering data include:

An example of a completed table is shown in Figure 10. 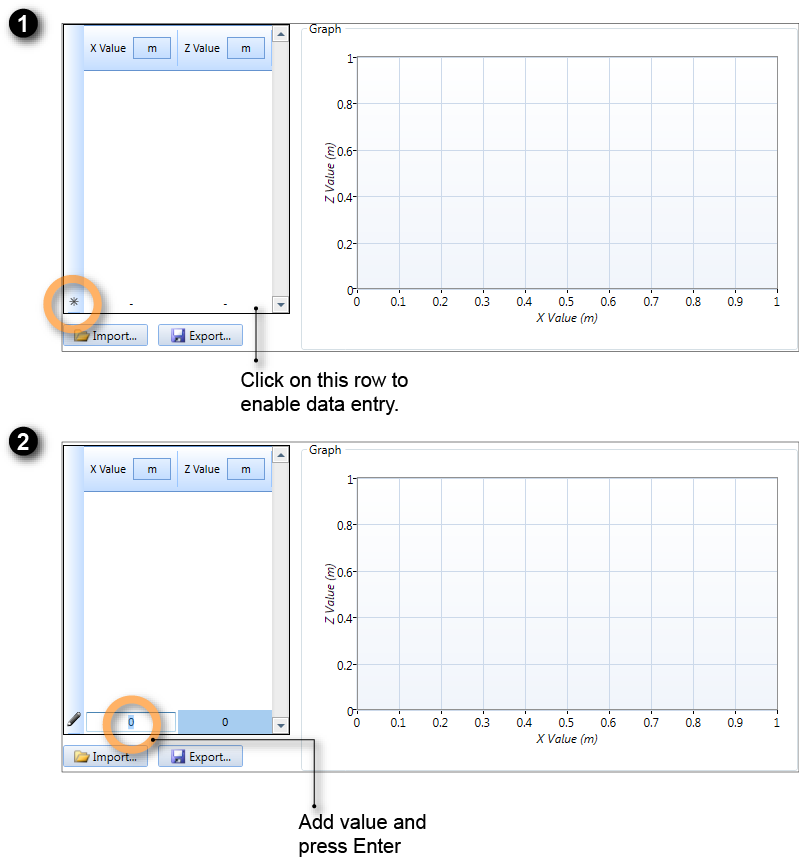