The controlled splitter node, in common with all others, represents a location and can therefore be considered to be site scale. It is used at every model time-step.

Parameterisation of the splitter model

The splitter model consists of a functional relationship between the rate at which water arrives from upstream and the rate at which water will flow down the effluent. The physical properties of the splitter are modelled by using two curves (see Figure 2). The upper physical limit curve defines the maximum flow rate that can be sent down the effluent for a given upstream inflow. Likewise, the lower physical limit curve represents the minimum flow rate that must be sent down the effluent at the given upstream inflow rate.

Figure 2. Parameterisation of the splitter model

These two curves have the following properties:

The two operational limit curves are input by the modeller to model a loss, effluent, or distributary. The physical limit curves are only used to define the maximum extent of the operational envelope, and they do not need to be input. Note that for an uncontrolled splitter or loss the two curves would coincide.

The modeller can also dynamically operate the regulator on the controlled splitter each time-step, independently of the ordering system by defining the percentage opening of the regulator via the function manager. The user defines a % value between 0% and 100%, where 0% represents the regulator being fully operational between the lower operation limit and the upper operational limit.

Note: This is operational only when rules-based ordering has been enabled.

This functionality allows the modeller to control flow down effluents where orders may not be passed and will also work in conjunction with orders if they exist on the effluent.

During the flow phase there are five steps which must be carried out:

These steps are discussed further below.

Allotting the upstream flow between the main channel and the effluent

When deciding how much water to send down the effluent there are three points to consider:

These three constraints can be illustrated graphically by plotting two examples on the chart of the splitter’s operational limits (Figure 3). At the end of the order phase, prior to the current time step’s flow phase, the final values of the upstream, main channel and effluent orders to be used during the flow phase would have been calculated. Plotted on Figure 3 are two sets of {Main channel order + Effluent order, Effluent order} (A and B) that fall within the operational envelope. Also plotted on Figure 3 are two cases (C and D) where the final balance of main channel and effluent orders resulted in an excess upstream requirement as shown by the fact that they fall outside the operational envelope.

Figure 3. Allocating the upstream flow between the main channel and the effluent 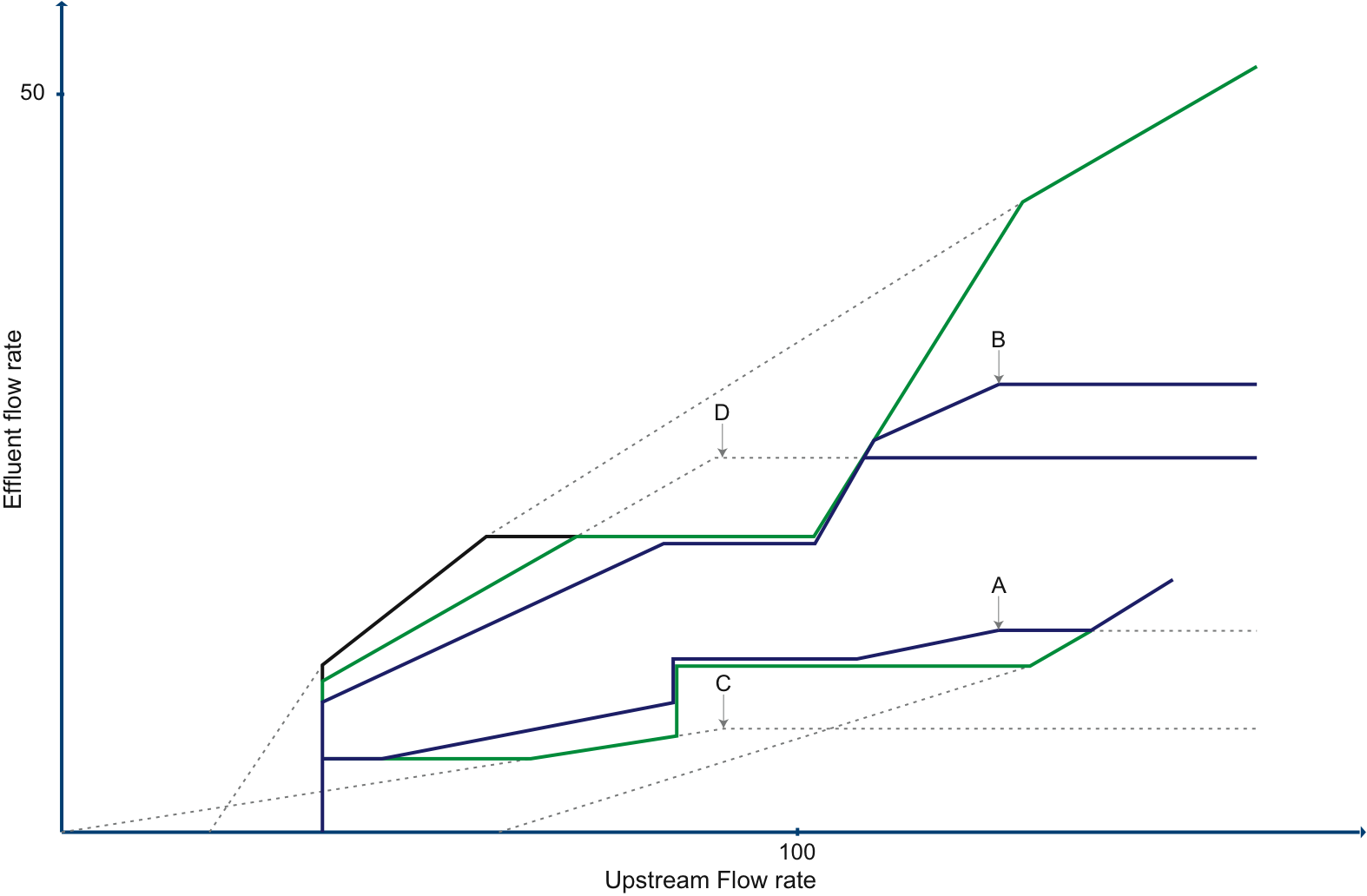 For each point a curve can be constructed by projecting a line back towards the origin and horizontally to the right. After adjusting each curve to fit within the operational envelope there is a set of curves (in blue for A and B, in green for C and D) from which the required effluent flow for the current upstream flow can be obtained.

If the splitter is using the Murray-style loss option, any excess upstream requirement would have already been shared to each owner using the fixed user-specified ratios. It is now necessary to work out who has to pay for any unwanted water flowing out the effluent. This is done by:

Borrowing to make up shortfalls

At this point it is known how much allocated water (and water directed by the use of a Murray-Style loss) is going down the main channel and the effluent and the corresponding upstream flow requirement for each owner (including their share of the excess upstream requirement). It is now necessary to make sure that enough water has turned up for each owner. This is done by:

The final step of the process is to direct the ownership of the unallocated flow down the correct branch. There are two options for how this is done:

From the point of view of ordering, there are two aims that must be met:

The first step in the process is to go back and collate the orders that have already been made and are going to pass through the splitter at the same time as the orders now being considered. These orders have already been passed up the system as they are being delivered from a reservoir that is further upstream than the reservoirs being used to meet the orders being currently considered. This water may now be in transit or alternatively be sitting in a closer reservoir waiting to be released. As the correct case is unknown all the prior orders are treated as if they are in transit and cannot be modified.

Ensuring there will be enough water

For cases 1 and 3 the required upstream flow is determined by finding the closest point on the chart that falls inside the envelope of allowed operation. The next section describes how this is carried out. For case 2 the upstream order is simply the sum of the downstream orders.

Graphically, this is represented by a line projecting horizontally to the right until the line intercepts the envelope at which point the required upstream flow will be found. The line is horizontal as it is only the main channel flows being increased, continuing until the combination of main channel and effluent flows falls within the envelope of allowed operation. The effluent flow remains unaltered. As the main channel flows had to be increased to enable orders on the effluent to be met, the users on the effluent are considered to have been responsible for the need for extra water so they will be required to fund it.

Figure 4. Situation when the main channel order is too big compared to the effluent order 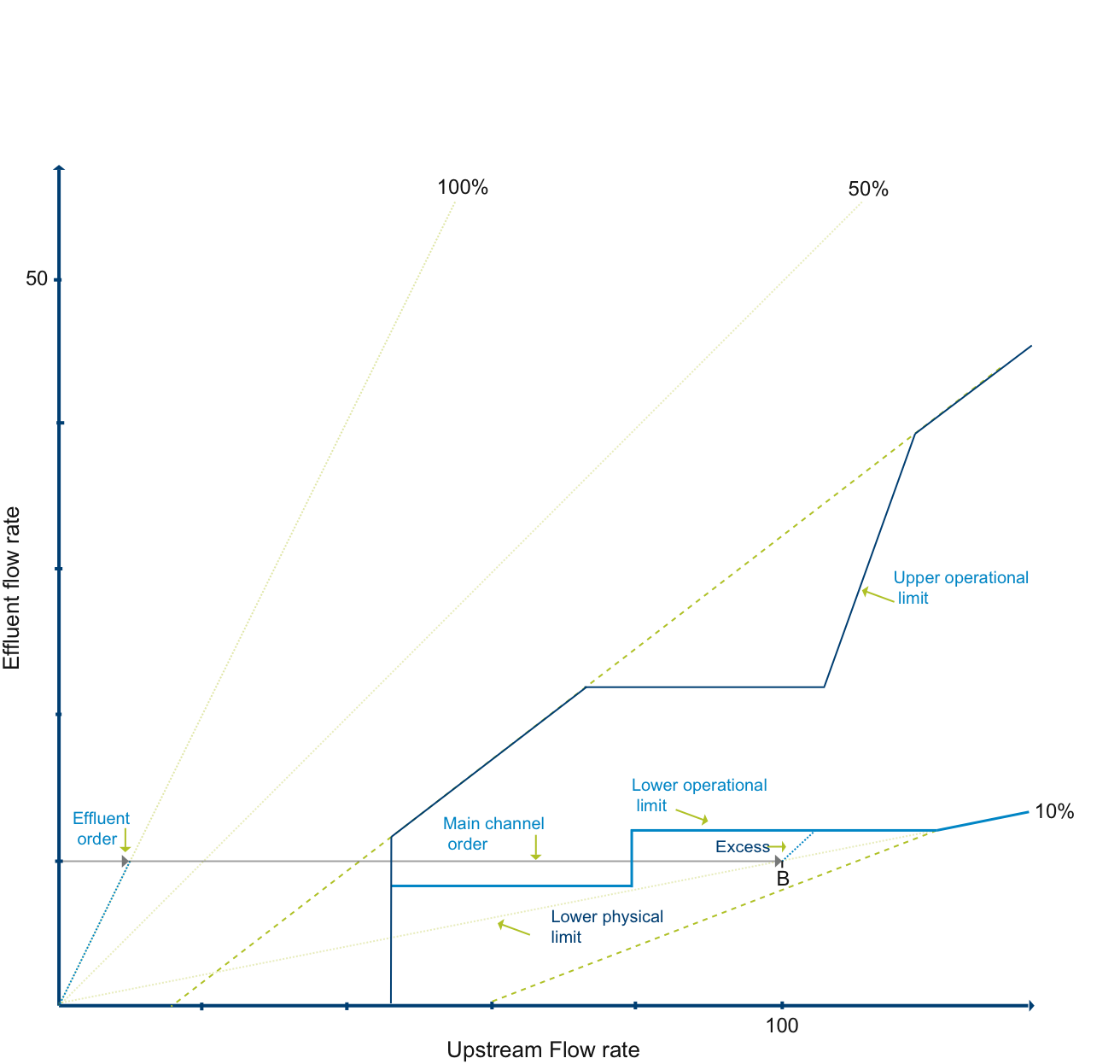 In both cases the excess upstream flow requirement can then be calculated by subtracting from the required upstream flow the sum of the downstream orders.

Adjusting the result in the light of prior orders

If there were any prior orders then the results have to be adjusted to take these into account. There are two steps involved in this adjustment:

As the total requirements on the main channel and effluent branch have changed it is possible that the excess which was calculated earlier in the model run as being applicable to the transit time now being considered has been reduced. This could have happened, as an example, if the users on one branch use a reservoir which is more distant than that of the users on the other. In this case, the users ordering first will generate an excess which, when the other users order can be then utilised to meet these new orders. The orders are adjusted as follows:

Refer to the Source User Guide for detailed data requirements and formats.

If the effluent is not regulated (i.e an Uncontrolled Splitter or a Loss) the user specifies a monotonically increasing piecewise linear function that describes the amount of flow that will pass down the effluent for corresponding upstream flow.

If the user specifies that the effluent is regulated (ie a Controlled Splitter) the user inputs monotonically increasing piecewise linear functions that describe the minimum and maximum amounts of flow that will pass down the effluent for corresponding upstream flow values.

The above mentioned functions may be entered manually by the user or by uploading comma separated files (.CSV).

Information on the meaning and function of each parameter, whether it is a "physical" parameter or otherwise, and its units can be found in the Theory and Process sections above. Where applicable, information on default values and the range of valid values can also be found in these sections.

Outputs include time series of outflows for the main channel and effluent channel.