Types of functions and variables

Context variables are not available in Source (public version).

Using functions is one of several ways of adding data in a Source model. Used in conjunction with variables, they provide a robust and flexible way of data input. There are six types of variables available in Source:

There are also built-in Input Sets and Custom Functions.

To define a new pattern variable (as shown in Figure 1):

Source evaluates the day or month for the current time step and returns the appropriate value.

Note: When using monthly pattern demand models, a discrepancy between leap and non-leap years occurs because of the difference in number of days for February. To avoid this, set up a time series demand model with a time series variable and assign a function as input. Refer to the Time Series Demand model for details. 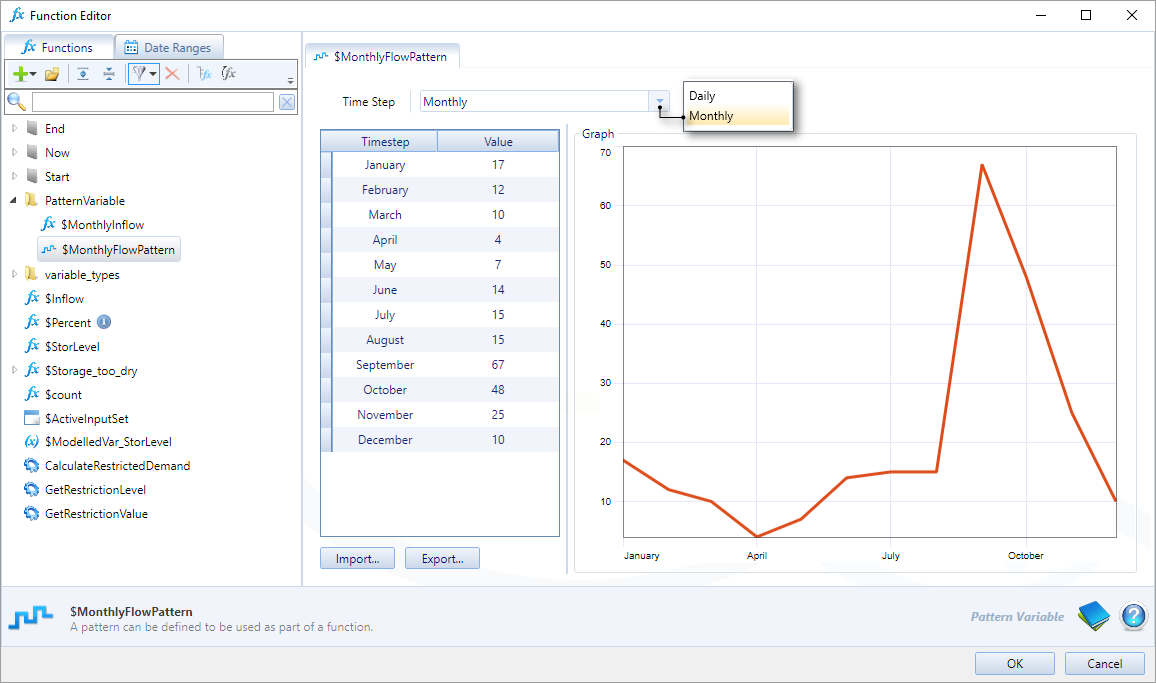 For example, you want to use mean monthly inflows for every time step in a monthly model simulation. In the Function Editor, define a pattern variable modelling monthly mean flows, $MonthlyFlowPattern (Figure 1). Then, in the Inflow node's feature editor, select the Function Editor and, create a function, $MonthlyInflow, that refers to the pattern variable (Figure 2). 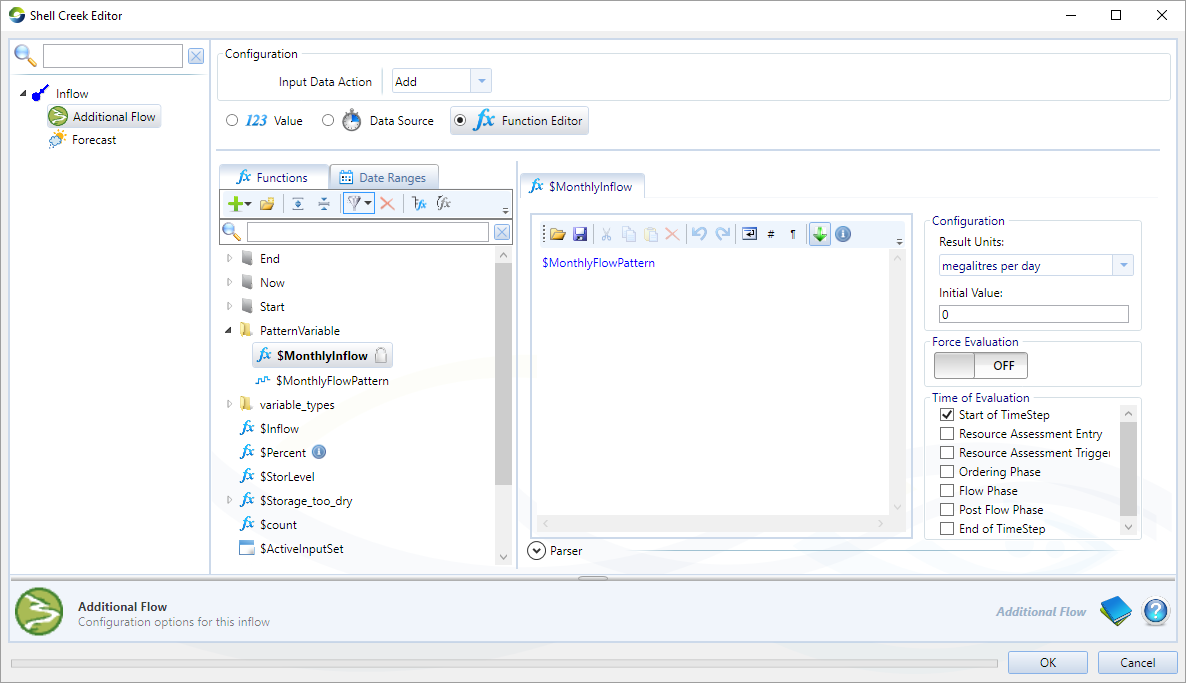 To work with a time series variable:

Figure 3 shows an example of a Time series variable. Refer to Loading data for information on working with the Data Sources panel. 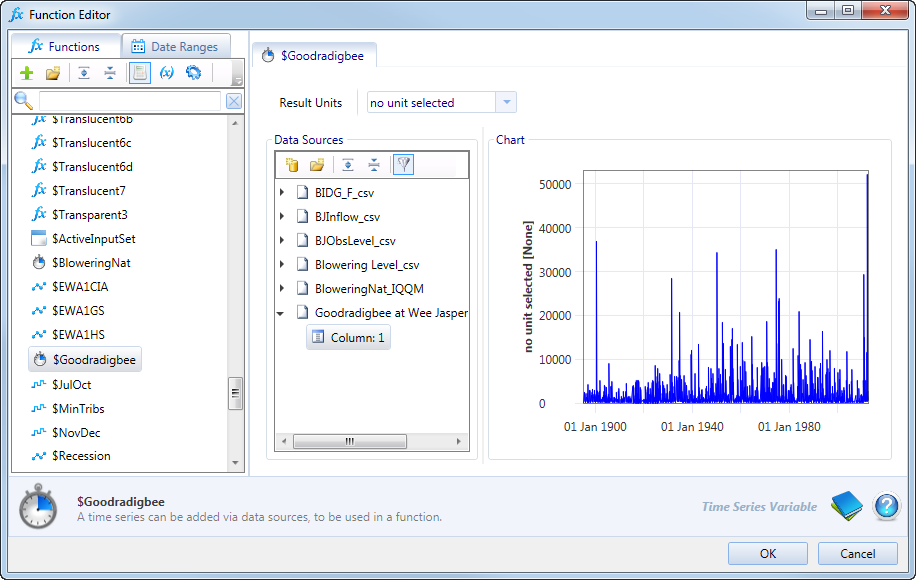 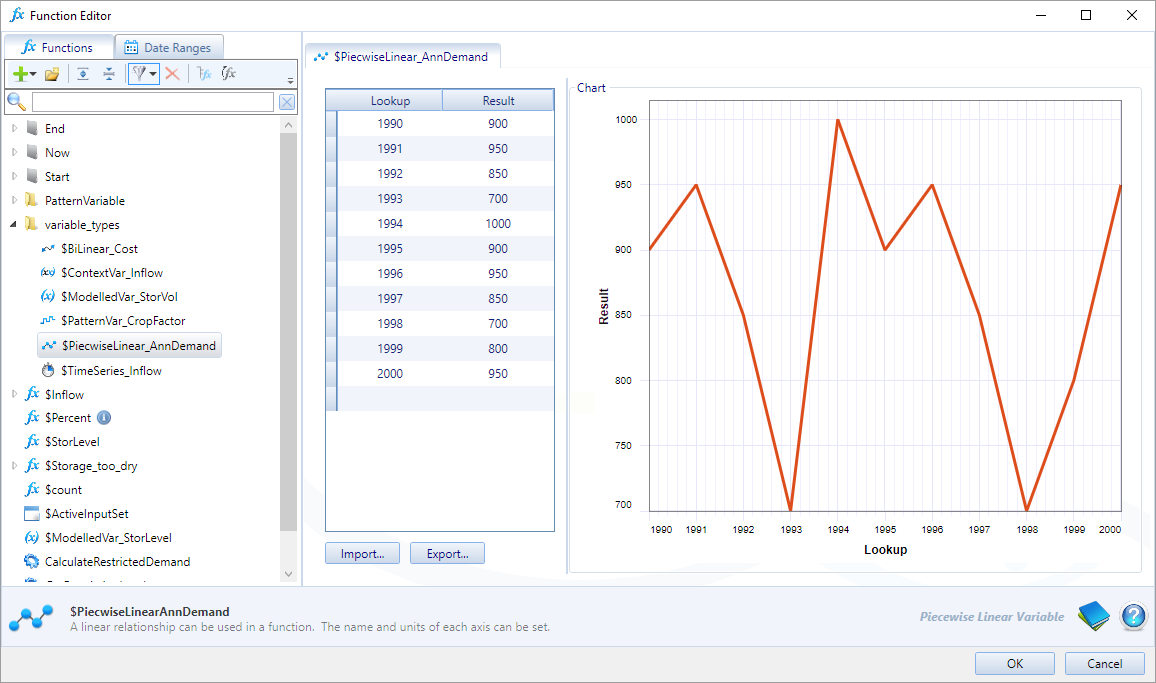 Once defined, a piecewise variable can be accessed using lookup($var, x), in a similar manner to bilinear variables.

Bilinear variables (Figure 5) allow you to look up and interpolate values in two dimensions. In the top half of the screen, you name the variables; the table below allows you to define the relationship.

To configure a new bilinear variable in the Function editor:

desc is a title, it is ignored during import. In exported *.csv files it will have the text 'X across Y down'

x and y are look up values

In Figure 5, the X values (row headers) are volumes, the Y values (column headers) are years, and the results are the pumping costs per ML. 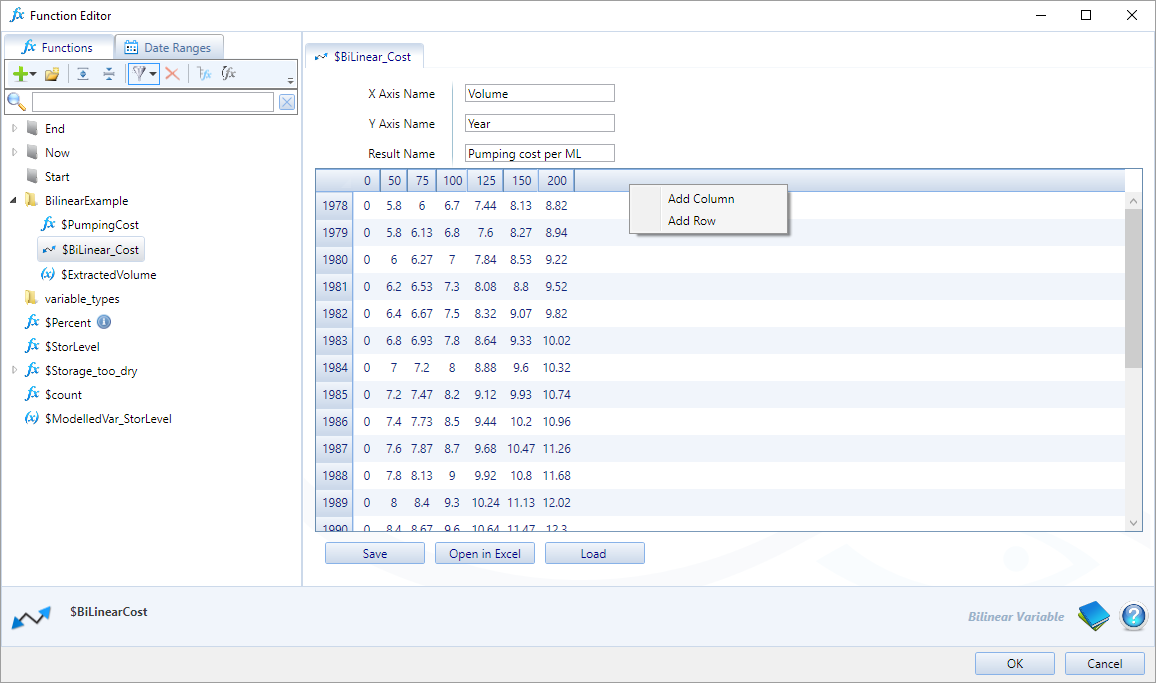 Once defined, a bilinear variable can be accessed using lookup($var, x, y), as shown in Figure 6. In this instance, the function $PumpingCost is looking up the bilinear variable $BiLinear_Cost (defined in Figure 5). The x value used for the lookup is the modelled variable $ExtractedVolume, which is the extracted volume from a supply point; the y value used is $Now.Year, which is the year of the current time-step. 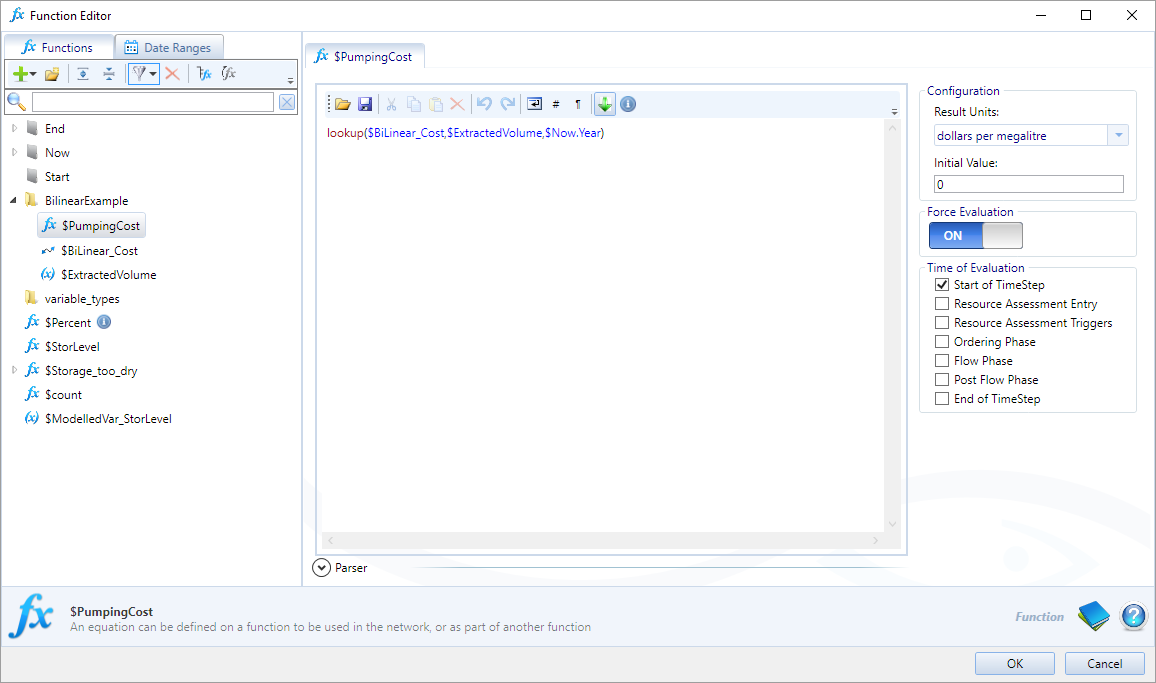 Figure 7 shows an example of a modelled variable.

Note: Because functions can be recorded, combining functions with modelled variables allows you to create iterative functions, where a function can use the result of itself from a previous time step. See Using Restriction Curves for a worked example of this usage. 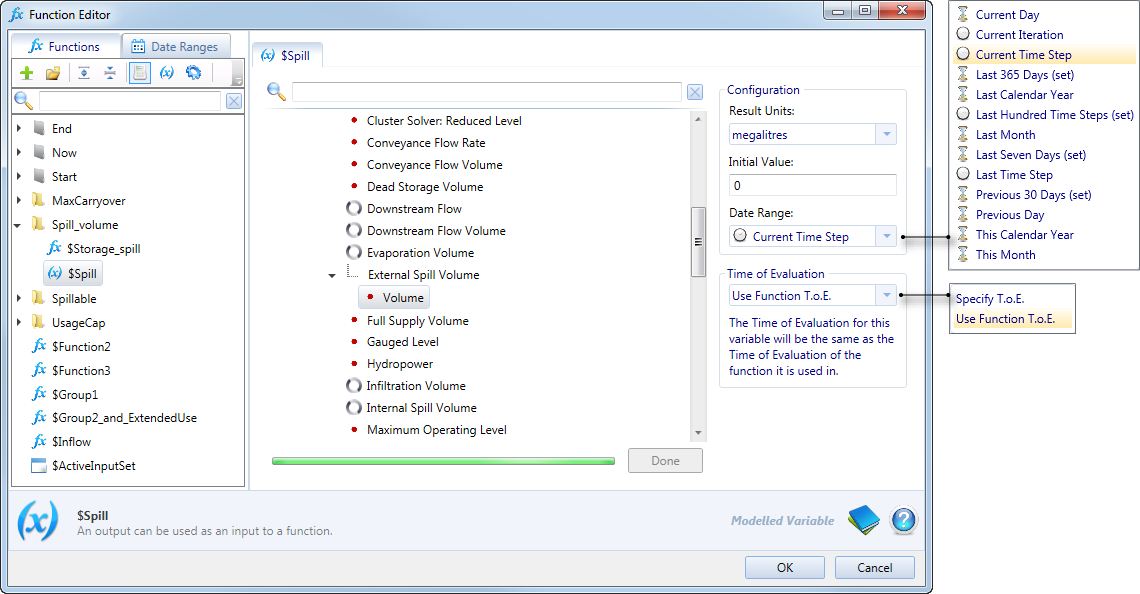 Date ranges apply to modelled variables and context variables. The default date range is a single value for the current time step. You can choose to set up variables to be a specific timestep in the past or a list of values from previous time steps or time spans. Tables 10 and 11 here define the options which are available by default.

If none of the default options is appropriate, you can define your own date ranges using one of the options from the Date Ranges toolbar (Figure 8). To calculate a particular date in the water year using the calendar date functions, you can use $now.dayofyear+184 (to indicate the next calendar year) for example, or $now.dayofyear-181 (represents the current calendar year). 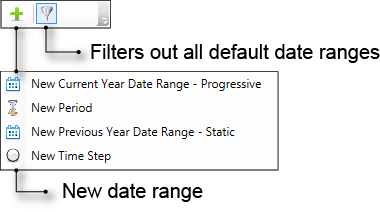 Note: While the interface uses the word set to refer to the concept of returning multiple values, because the values are both ordered and can be repeated, these can be thought of as lists. 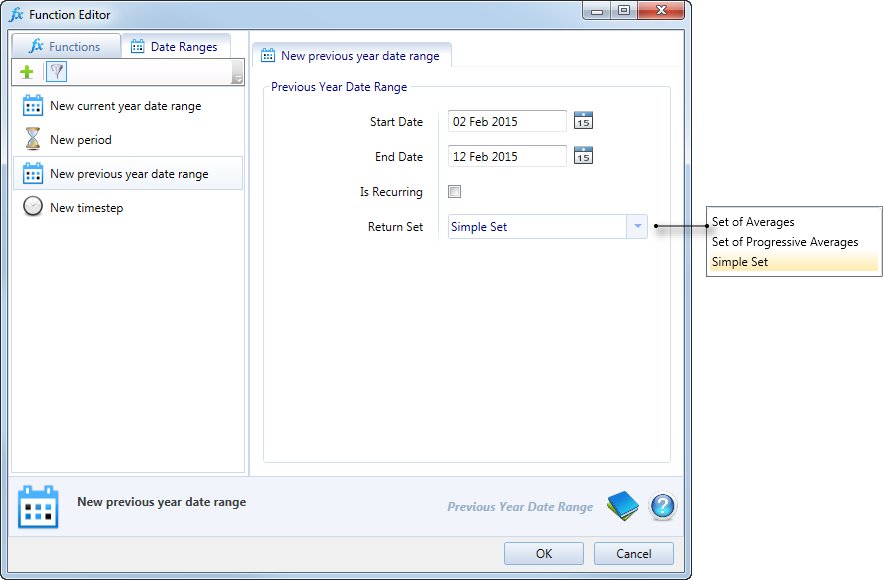 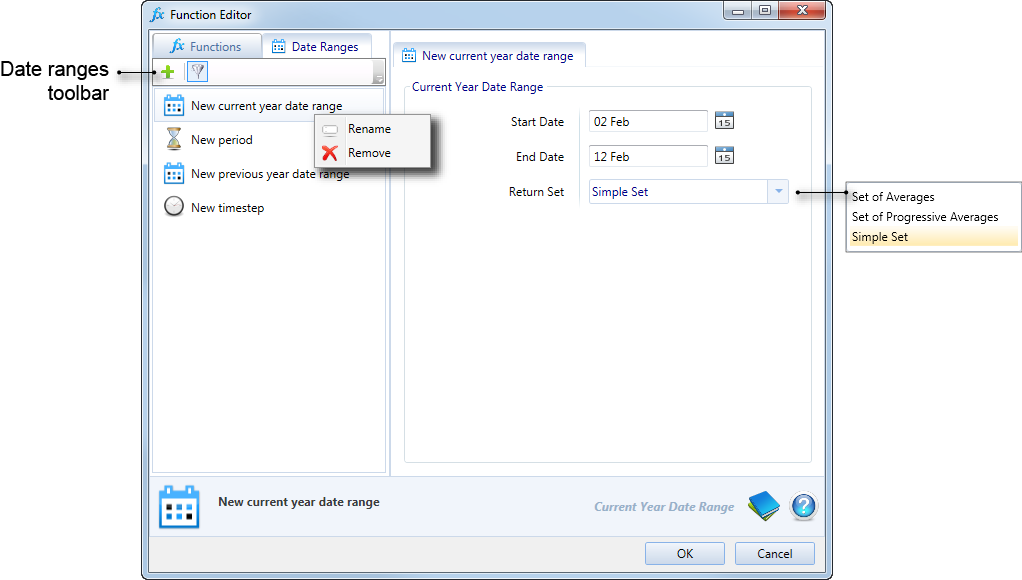 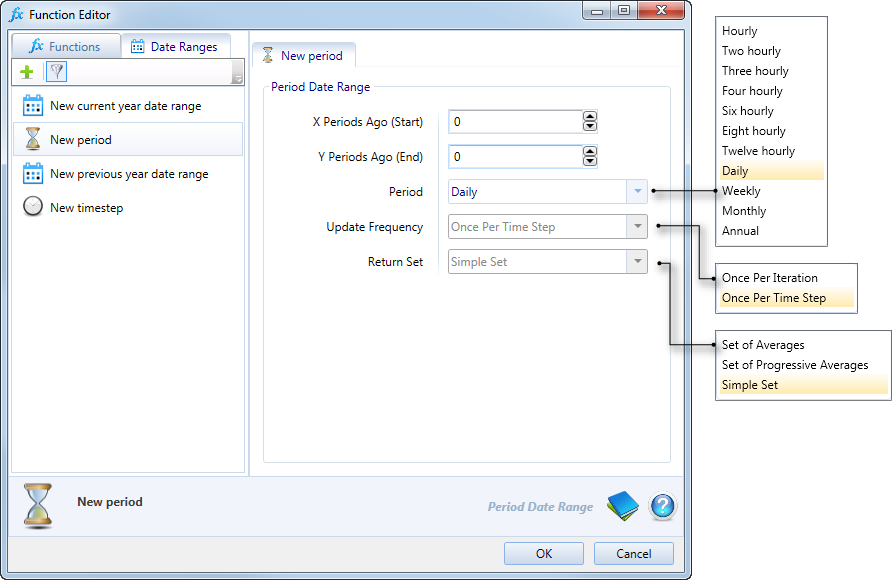 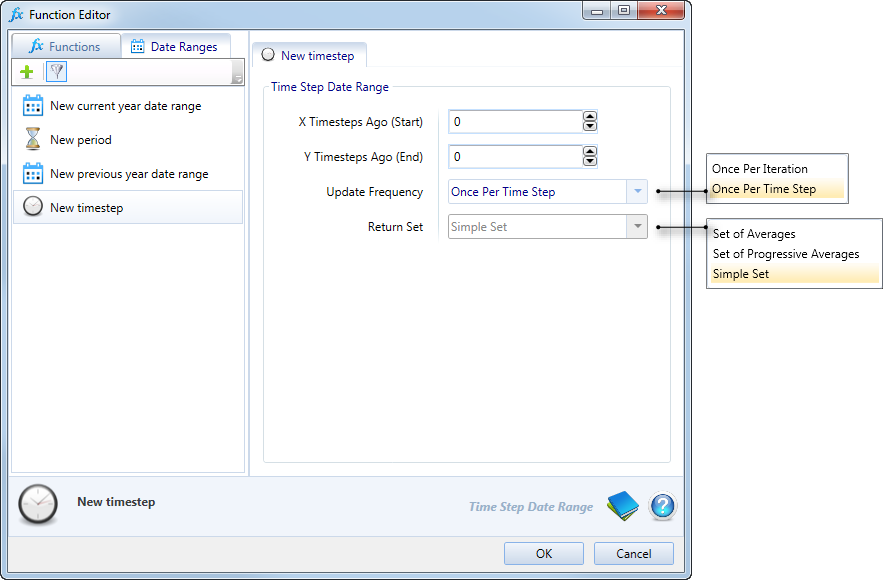 One application of context variables is in rainfall runoff modelling, an example is provided next.

As an example, you can use a context variable when specifying a function for rainfall runoff models. Consider a geographic scenario with rainfall input as a time series. For this exercise, the Catchment surface runoff is a function of Rainfall. This function scales the rainfall (one context variable) according to a parameter (the second context variable). Table 1 shows details of the variables.

In the Rainfall Runoff Configuration Model dialog, choose Function based as the model type (refer to Working with rainfall runoff models for more information). Click on the Catchment surface runoff link to specify the input parameters. Define the context variables and function using the Function Editor, as shown in Figure 13.

Allows you to create your own function and then import it for use in the Function manager. Refer to Custom Function Plugins and How to write plugins for Source. The Parameter count column refers to the number of arguments used in the function. 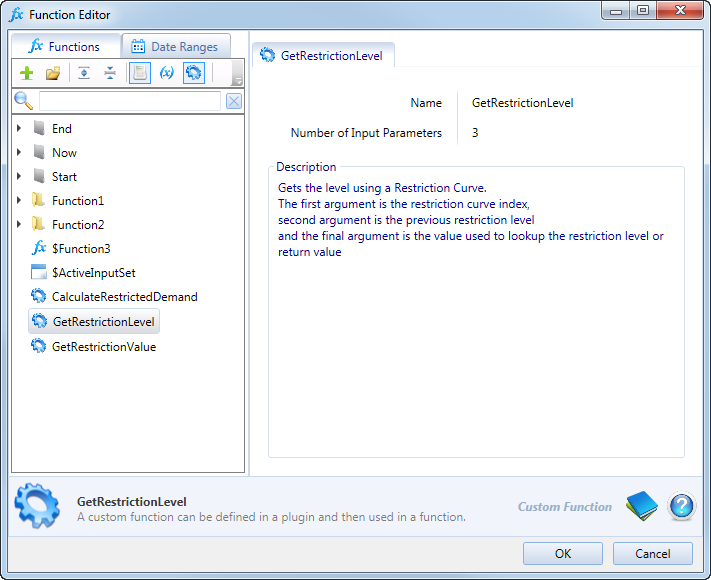