Skip to end of metadata Go to start of metadata
This feature is not available in Source (public version).

To ensure the most efficient use of the available water resource, you must be able to transfer water ownership amongst owners. If one or more owners has surplus capacity or water, they lend this to the owners with a deficit using the Borrow and Payback systems. If multiple owners need to borrow, and there is insufficient water or capacity to meet their combined requirement, a configured Distribution system is used to determine priority of access.

A distribution system is one where owners with surplus water share their allocated percentage with owners that cannot meet their requirements. They define how this resource can be shared amongst owners based on priority levels. The proportion that is distributed is determined as follows:

Note: An owner may distribute some or all of their water to one or several owners in varying proportions. The total amount of water, including that not distributed, must at all times, remain at but never exceed 100%.

Distribution systems have the following characteristics:

Priority levels determine the order of distribution amongst owners that require water, which occurs from highest to lowest. Surpluses must fully meet requirements (deficits) at a higher priority level before the next lower priority level is considered. In other words, they will always be executed for each owner at priority level 1, then priority level 2, and so on. Also note the following:

Note: One owner can be part of several priority levels.

An example of a priority level description is shown in Figure 2. 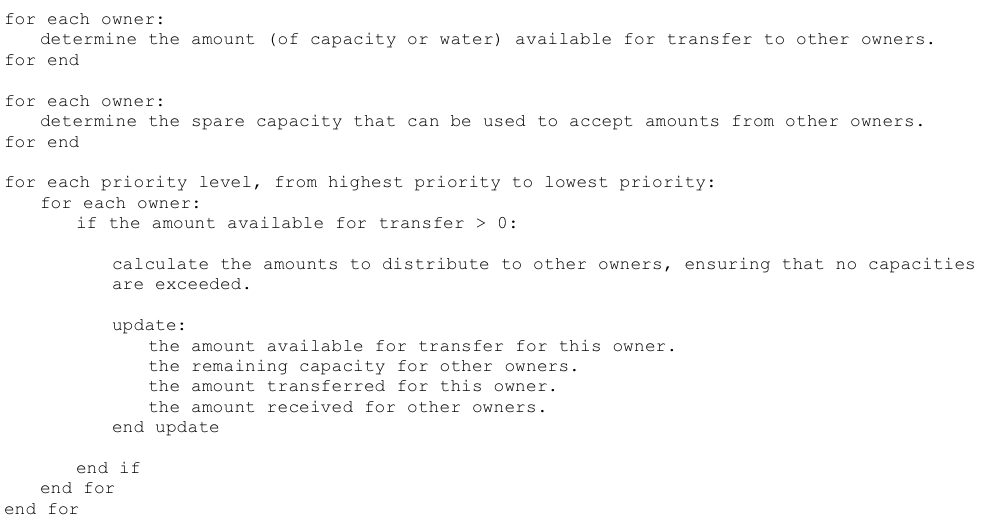 The table specifies the list of owners that share water at each priority level. Click Add Priority Level to add additional priority levels and tick or untick the relevant checkboxes to add or remove an owner from a priority level. 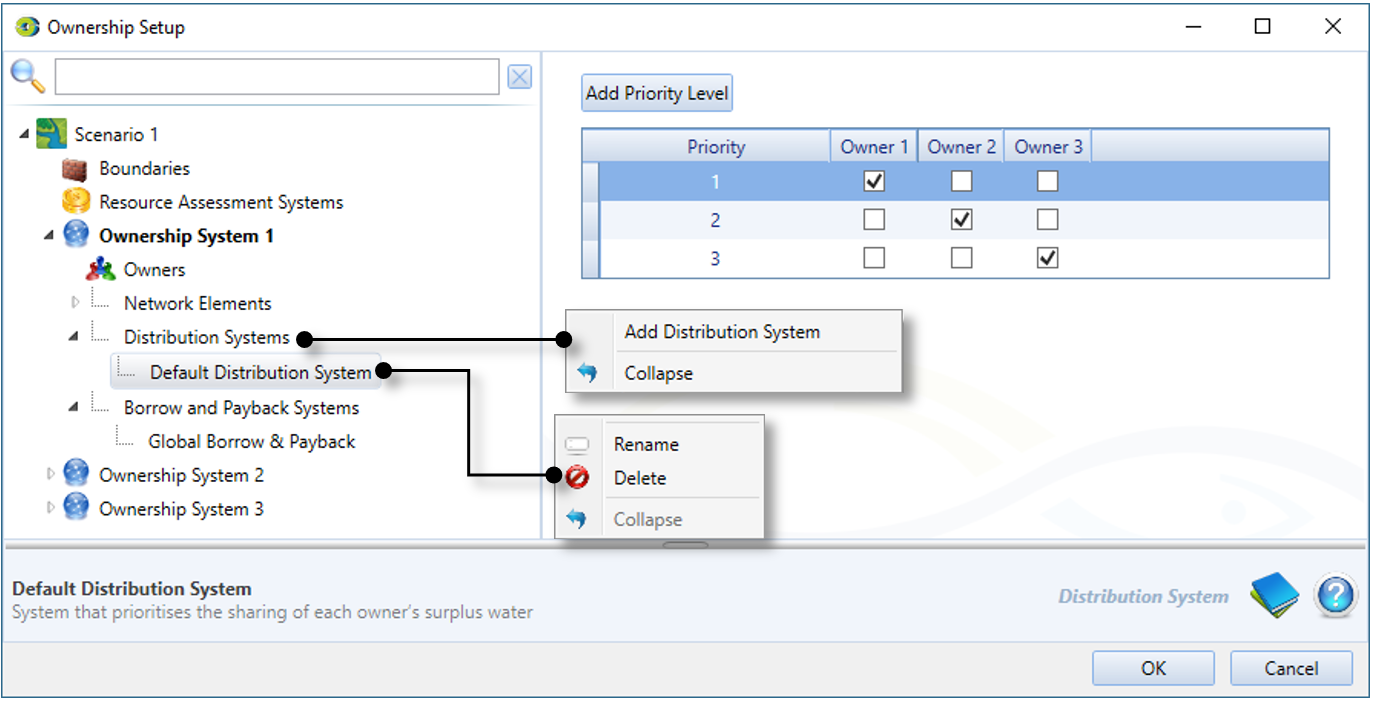 In a distribution system, borrow records the exchange of water from owners with surplus to those with deficit. Borrowing can occur at any node where there is a loss or gain, and results in the ownership of the borrowed water being transferred from a lender to the borrower. An exchange of water indicates that when an owner borrows water, they need to pay it back to the owner they borrowed it from. This is referred to as payback, which occurs when water that was lent to a particular owner is paid back to its original owner. Borrowing owners may pay back their debt by transferring their water to the other owner, either in a specified payback storage or indirectly via Resource Assessment Systems.

Note: Payback can only occur when the borrowing owner has water within the relevant system (the ownership system or a storage) to transfer to the lending owner.

Types of borrow and payback

There are two types of borrow and payback systems (as shown in Figure 3):

Note: By default, a storage is part of a global system. For both systems, the amount of borrow from individual owners is limited by system capacity.

Each storage that falls within a scenario's ownership system can only be a member of one borrow and payback system, but where there is reconciliation/payback at a storage for the global system, a local system storage must be used (represented by Storage 1 in Figure 3). 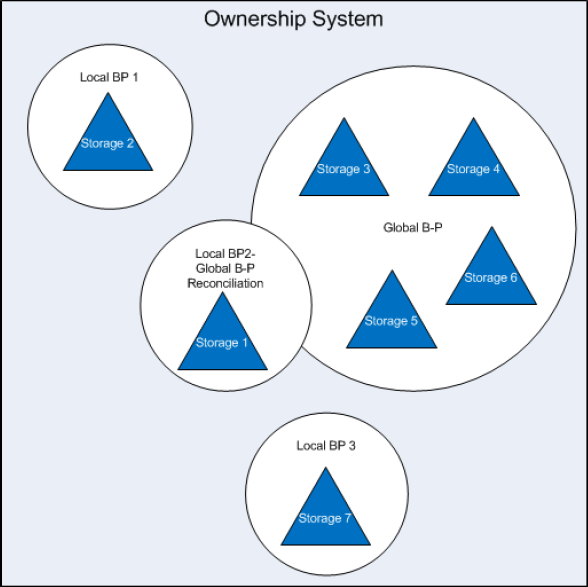 Configuration items for global and local B-P systems are similar (Figure 4). For both types of B-P, you must specify the distribution system, along with the borrowing parties.

For global borrow and payback, in addition to specifying a distribution system and borrowing configuration, you must also configure the type of payback:

To view the results of distributed water, as well as that borrowed and paid back, enable recording of the Ownership and Borrow and Payback attributes under Parameters in the Project Explorer. After configuring and running the scenario, click View Results in the Recording Manager to open the Ownership Results dialog (Figure 5).

Figure 5. Borrow-payback balance (as a time-step) 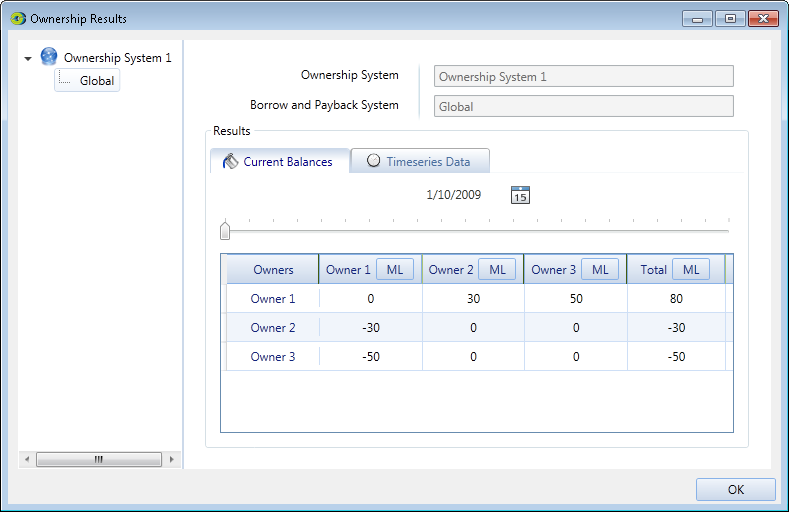 This window shows all the ownership systems present in the scenario, along with the borrow-payback systems that are part of the ownership system. It shows the borrow and payback balances amongst owners at a particular time-step (as a table in the Current Balances tab or a time series in the Timeseries Data tab). You can also use the date-picker above the time scroll to change the date. The Total column shows the overall balances for each owner at that time-step. Payback occurs from an owner that has a negative balance to another owner with a positive balance.

Figure 6 shows the borrow-payback balances for all three owners as a time series. The graph can be separated into three distinct segments: