The main function of the environmental flow manager is to prioritise and activate actions based on a priority purchasing style conceptual model (Figure 3).

Actions are defined at environmental flow nodes and consist of a set of criteria (system conditions), target response, defined success, and condition function. Actions from various EFNs can be grouped and will then be assessed by the environmental flow manager as a set of actions that need to be activated together. Groups are defined at the EFM level allowing actions for multiple assets to be linked.

The Environmental Flow Manager will then determine whether there is sufficient water available to meet each group's needs in priority order, decreasing the amount available to each subsequent priority as the group above reserves water. To do this, the EFM steps through the ranked action list and compares the cost of the action (ie. the volume of water required to deliver the action) to the available water in the portfolios of accounts that can be accessed by the action. If enough water is available, the EFM will commit the water required to meet the estimated cost (i.e. subtracts the volume from the water available), so that the committed water is not available for actions with lower importance. The environmental flow manager flags the action as active to the EFN. The environmental flow manager does not execute actions, it gives permission to the environmental flow node to evaluate the criteria of the flagged (committed) rule and initiate a target response (eg. place orders) when appropriate. Accounts are only debited after orders are made (either order debit or use debit depending on your accounting system). 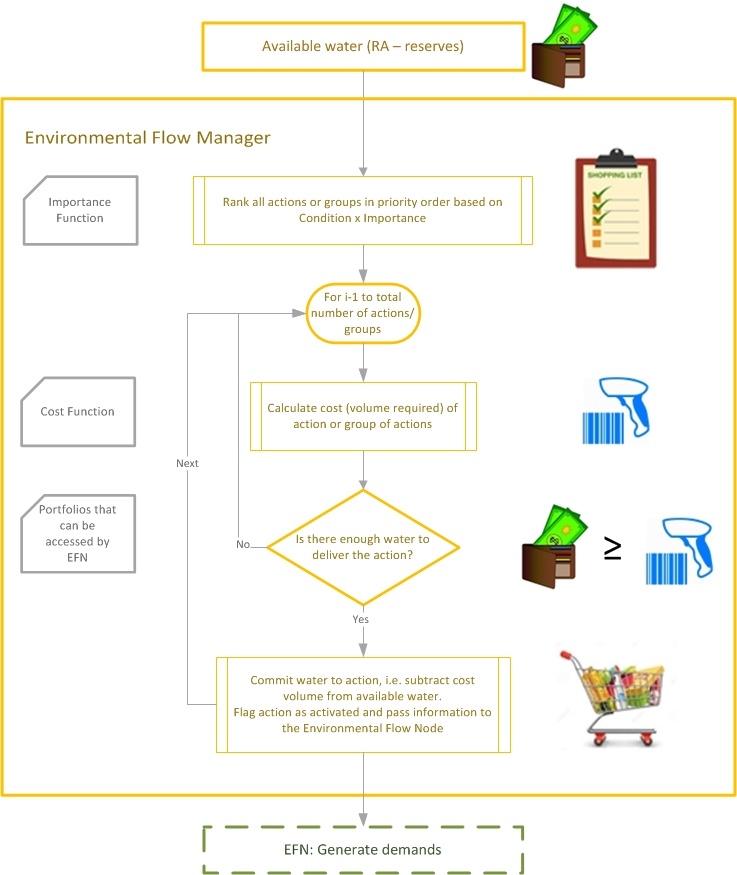 After the resource assessment phase is complete, the flow manager phase begins. Details of all the phases can be found here under Model Simulation Phases. At a high level the process is as follows:

1. Update functions with time of evaluation of Environmental Flow Prioritisation

All functions are updated at the very start of the prioritisation phase. This is to ensure that any priority, estimated cost, balance adjustment and decision point functions can get updated before we begin the main section of the EFM prioritisation phase.  Any modelled variables used in the function will need to be evaluated at "Current Iteration" to include previous decisons made.

2. Decide if the flow manager will run based on the decision point configuration

The decision point can be used to restrict how often the prioritisation loop occurs. This can be set to every time step or a boolean function. If a function is used it must be set to a time of evaluation of Environmental Flow Prioritisation or earlier.

If a function returns false, each group maintains the state it set to by the EFM during the last time the main priorisation loop occurred (i.e. any enabled groups will continue being enabled, even though the EFM has not run).

The balance of a portfolio is equal to:

There is also the concept of Availabe Water, this will be used in the main prioritisation loop to keep track of water still available.

Before any prioritisation can occur, the priorities of all actions associated with EFM are calculated. Only actions that are enabled at the node and are allowed to order are considered by the EFM.

The priority of an action is defined as:

where Condition unless specified by the user is equal to

The Priority of a group is equal to the action with highest priority (i.e. lowest numerical value)

The priorities are only calculated once per timestep. This means any changes to condition or importance during prioritisation iterations will not be used.

Next, Addition groups are removed from Groups to Prioritise:

Once the priorities are calculated, the main loop begins:

It is important to note a few things in the above pseudo code. First, groups are prioritised in the following order: Groups that were actively ordering last timestep, groups that were enabled last time the EFM was run then by priority. The ReducePortfoliosByCost function is the same as described above.

The UpdateFunctions() method will update any functions with time of evaluation Environmental Flow Prioritisation. Note: Any modelled variables that need to be used during the iterations must have the Date Range set to Current Iteration otherwise they will not update each iteration.

Prioritisation of actions/groups within the flow manager

The environmental flow manager sorts groups of actions into ascending priority order by examining the priority values generated for each action by the importance and condition functions. The condition is calculated by default as the natural exponent of the number of days since last success divided by the average desired return interval. This can be replaced by a user specified condition function. The importance weighting is calculated using a user defined function, which allows flexibility in the way the events are prioritised and coordinated.

If groups have the same priority value, then they are ranked by the importance values, then by the condition. The priority of a group is considered to be equal to that of the highest priority action within that group.

If all actions in a groups have an importance of <= 0, the group is disabled.

The environmental flow manager will not enable an action if it returns an importance value that is zero or negative. Groups with any actions with importance > 0 will still be enabled along with any actions in them. To disable a group with multiple actions all actions would need to have importance = 0.

All functions are set by default to evaluate at the start of time step, environmental flow prioritisation phase is an advanced usage. If enabling one group has dependencies on another group (e.g. the cost or importance are a function of another group being enabled or not), the functions will need to be evaluated multiple times during prioritisation, and therefore the time of evaluation for the function needs to be set to 'Environmental Flow Prioritisation'. This allows the cost of actions, and hence groups, to be recalculated based on the groups which have already been enabled or disabled. This recalculation occurs each time a group is enabled or disabled.

An action can be disabled at the node and will be ignored by the flow manager, even if it is in a group.

An action will effectively be disabled if the flow manager does not allocate water to its group, however, the action will still monitor the flow based on action definition.

When an action is disabled at the EFN, the action has effectively been turned off for the whole run, as opposed to the enabling/disabling by the manager which is dynamic.