Skip to end of metadata Go to start of metadata
Functions are a powerful, complex feature of Source that allow customisation of models by advanced users.

A model element's behaviour can depend on dynamic values within the model. Functions allow you to control this behaviour via an arithmetic expression. They are used in places where you might otherwise employ a time series or a single value (eg. a node's feature editor). This page provides general information about working with functions:

Refer to the following sub-pages for more specific information:

The ability to use a function as a model input is a powerful way to customise model behaviour. For the purposes of discussing functions, a model element is any part of the model that can use a function as an input instead of a data source or value. This includes:

The ability to use a function as input is indicated in Source windows in one of two ways:

Example use of a function

As an example, you can use a function at a Maximum Order Constraint node to limit the maximum orders for each time-step based on predicted inflow and orders. Assume that a channel constraint of 80 ML/day is required to prevent flows going overbank, except during floods (defined as more than 2,000 ML/day) when up to 3,000 ML/day is permitted as an environmental flow.

Figure 2 shows a fragment of the river network. Downstream demands are represented by a supply point and water user node. In the Function Editor, you specify the internal orders and unregulated river gain of the model using modelled variables. Maximum orders are then defined using a function. 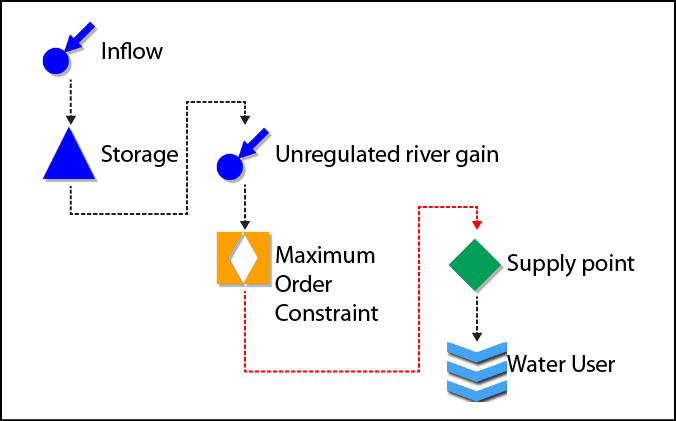 In this case, the following modelled variables will be assigned to these components:

Note that both variables will have a date range of Last Time Step, ML/day as designated units and Time of Evaluation as Ordering Phase.

Functions can be used extensively for defining model elements in Source, as well as being used within other functions and as a stand-alone evaluation tool. This can result in a large number of functions with complex relationships being present in a model. Source has inbuilt function management capability to assist you in keeping track of your functions and variables, which should be used in conjunction with the design of a systematic approach to function organisation during the model conceptualisation process.

The Function Manager (Figure 3) allows you to centrally manage all functions that have been defined in Source.

The Function Manager can be accessed in one of two ways:

It will then open in the main screen. 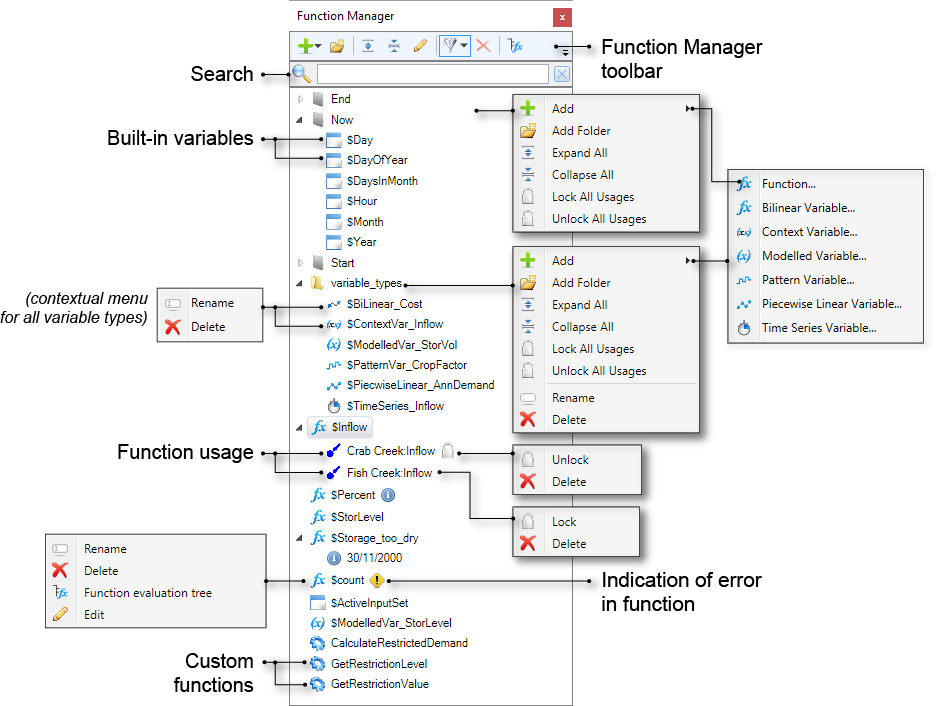 The Function Manager lists the functions and variables available within the active scenario in a tree menu. Items in this function tree are:

Shown in Figure 4, the Function Manager toolbar has the following features: 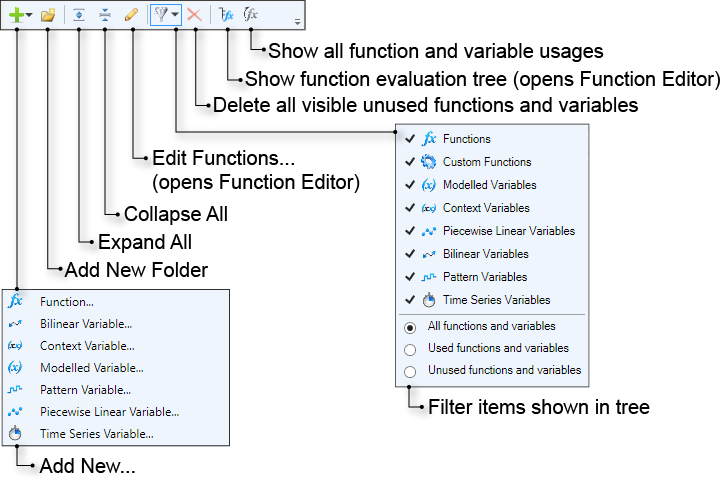 The contextual menus (accessed by right clicking within Function Manager, Figure 3) additionally allow you to:

Adding a function or variable

Functions and variables can be added through the Function Manager or Function Editor, the latter of which may be accessed from within other Source windows, wherever a model element indicates functions are available as an input (see above).

Follow these steps to add a variable or function using the Function Manager toolbar:

The function/variable can now be defined.

Deleting a function or variable

To delete a variable or function, choose the appropriate item in the function tree, right click, and choose Delete from the contextual menu.

Note: Source warns you if you attempt to delete a variable that is referenced in a function.

When created, functions, variables and folders have an automatically generated name. To rename an item, either double-click on the item or right-click on it and choose Rename from the contextual menu, then type the name you wish to assign.

Functions and variables that are in different folders can have non-unique names. When called, they will be referenced using the full path to the function (incorporating the folder name). For example, consider the setup shown in Figure 5:

Note: To avoid errors and confusion, it is recommended that you reference a function by it's full name. The syntax is $FolderName.FunctionName. Sub folders are considered unique, and are defined using both parent and sub folder names eg. $Folder2.SubFolder3.Function5 (Figure 5). 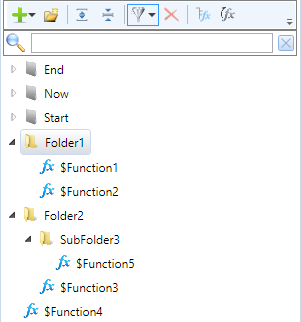 By default, the direct use of a function by a model element is shown in the function tree (Figure 6). To see all other usages, select the Show all Functions and Variable usages button from the toolbar. Once toggled on (indicated by a blue box around the button), three types of usages are shown underneath applicable functions and variables in the tree: 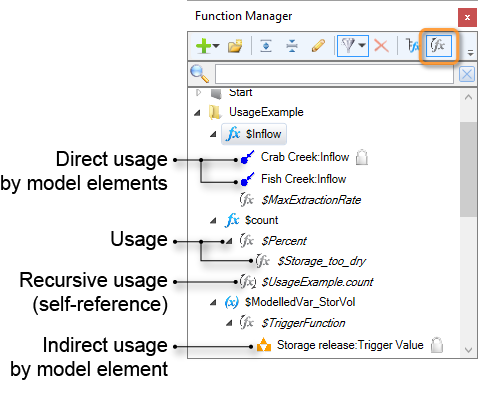 When working with a large number of functions, it is important to ensure that functions assigned to model elements are not accidentally reassigned while browsing or editing other functions. For this reason, Source has the concept of 'locking' functions, which will require you to explicitly communicate your desire to change which function is the input.

All elements that have their function usage locked are indicated in the function manager and general function editor with a closed padlock icon. Note that it is not possible to lock the usage of a function or variable

All locked usages by model elements (not other functions or variables) . Locking and unlocking usages can be managed in bulk in the function manager, or one by one in the function editor, by right clicking to access the context menu.

Function Editor accessed from within other Source windows

When you select a function as an input through another Source window (eg. a model element's feature editor) the first function you click on or add will be used and its usage locked, which is indicated by a lock icon next to the function's name in the function tree (eg. $MaxExtractionRate in Figure Y). This means that you will be able to browse the other functions and variables listed without accidentally choosing another function as the input.

To unlock a function right click and select Unlock Usage from the contextual menu. The first function you subsequently select or create will become locked.

Alternatively, while a function is still locked you can right click on another function and select Force Selection from the contextual menu, this function will become locked instead.

Note: To disable automatic locking of functions locking, navigate to Tools » Application Settings and toggle off Enable locking by default.

It is also possible to lock or unlock functions by using the contextual menus in the Function Manager window (Figure 3).

References and the Function Evaluation Tree

Selecting a function and enabling the Show function evaluation tree button will open the Function Editor and display the function evaluation tree. This displays in a tree menu structure all other functions and variables that provide values for the selected function, either directly or indirectly. For example, when the function $Storage_too_dry is evaluated, it references the function $Percent, which in turn uses several built-in variables and the functions $StorLevel and $count, and so on down the tree (Figure 7). When $Storage_too_dry is evaluated, all the other functions and variables listed are evaluated too. 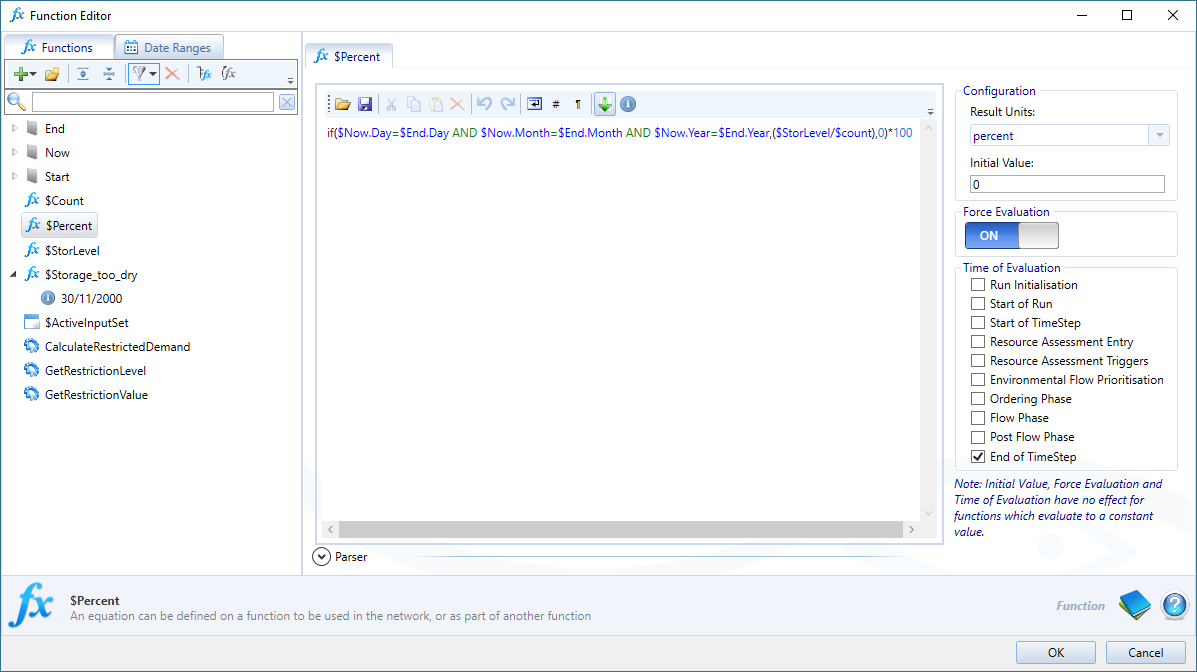 The Function Editor (shown in Figure 8) allows you to create, define, modify and delete functions and variables. It can be accessed in several ways:

The Function Editor is comprised of a pane on the left side, which is similar to the Function Manager. The display to the right of the function tree is specific to the item you have selected in the tree, allowing you to define the function or variable. The display for a function is shown in Figure 8, it contains the Function Editor Toolbar along with options for configuring your function. Using the display to define a function is described below, how to define variables and custom functions is described in Types of functions and variables.

Function Editor has several features to help with writing and testing functions: 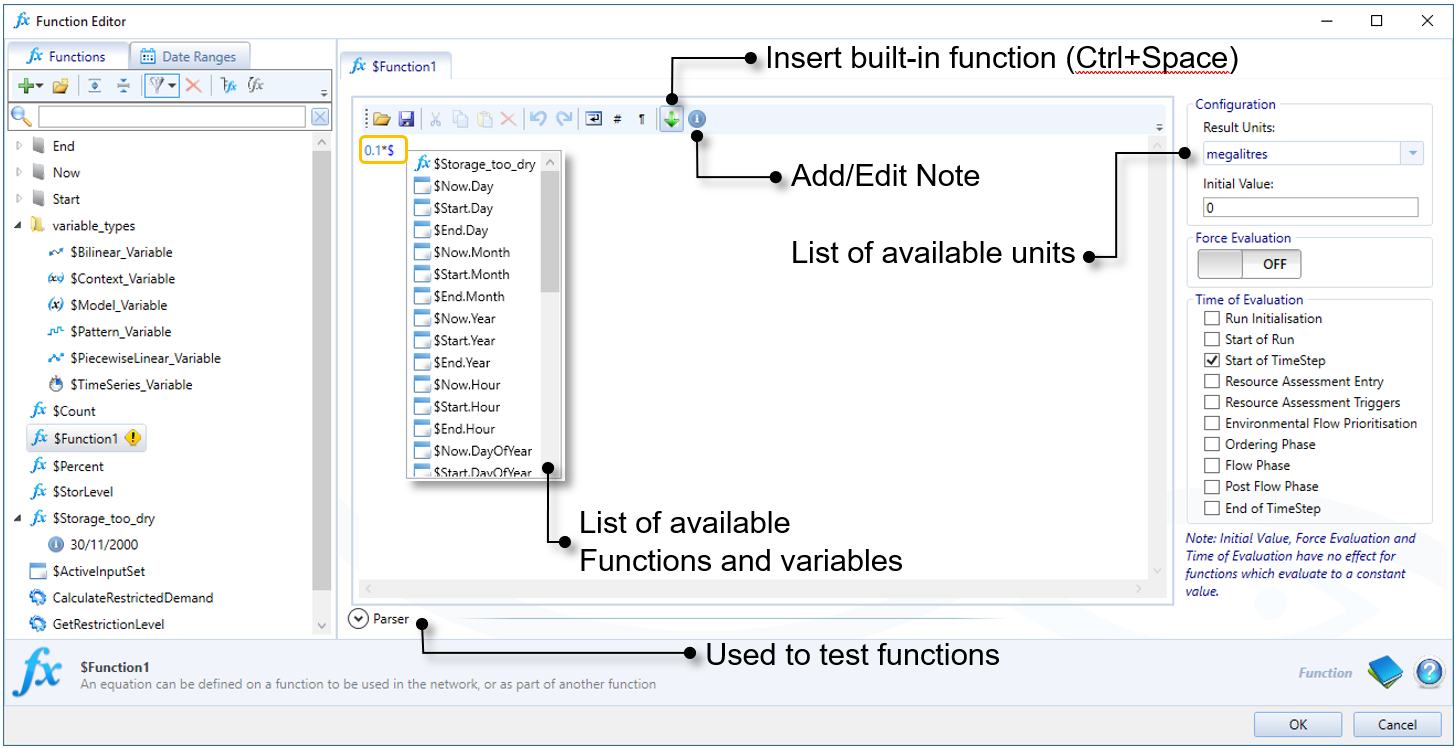 Adding a note to a function

You can include a text-based message, or note, to be associated with a function. Refer to About notes for more information. Additionally, you can insert an inline comment within the body of the function's expression.

Note: You can add a note to a function only, variables can currently not have notes.

To associate a note with a function (as shown in Figure 5):

Functions with notes are indicated by a note icon next to their name, if you hover your mouse over that icon, the note will display as a tooltip (Figure 5). 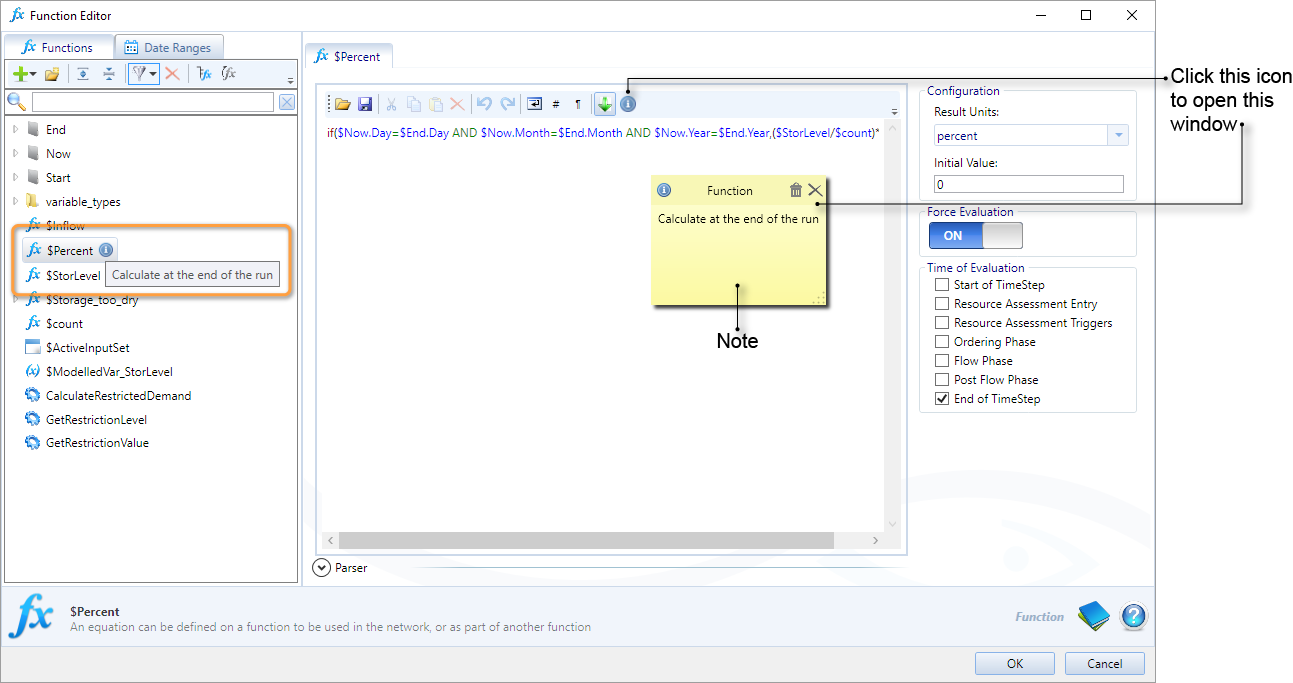 To write or edit a function, first open the Function Editor. Either add a new function or edit an existing one, as follows:

Note that you can set a function to a constant value. If you do so, Initial Value, and Time of Evaluation have no effect. If a function accepts values from a plugin, we need to turn on Force Evaluation to be able to accept different values passed from the plugin. Otherwise, the first constant value passed from the plugin will be used for the rest of the model run. This is because for constant value functions, Source will only evaluate it once and uses that value for the whole model run.

A function can reference other variables, and also other functions within the same scenario, including itself. When a function references itself, the initial value is used for the first evaluation of the function.

For example: $Function1 = $Function1 + $Function2
In this case, $Function1 will use its previous evaluation value to calculate its new one.

Notice that the list shown in Figure 6 contains $Function1 as an option.

Note: Circular references are prohibited between multiple functions. That is, $Function1 = $Function2 + 4, and $Function2 = $Function1 + 6 is not allowed, and Source will give an error if you run a model with this setup.

Once you have defined a function, you can test its operation using the Parser (Figure 8). You can enter values for the variables and functions called by your function and confirm that the result of evaluating your function with those values is what you expect. The Parser is used as follows:

To close the Parser interface, click on the same arrow.

If the function cannot be parsed, you will get an error icon next to the function in the Function Manager. Additionally, an error in the Log Reporter will be available at run time to indicate the same. 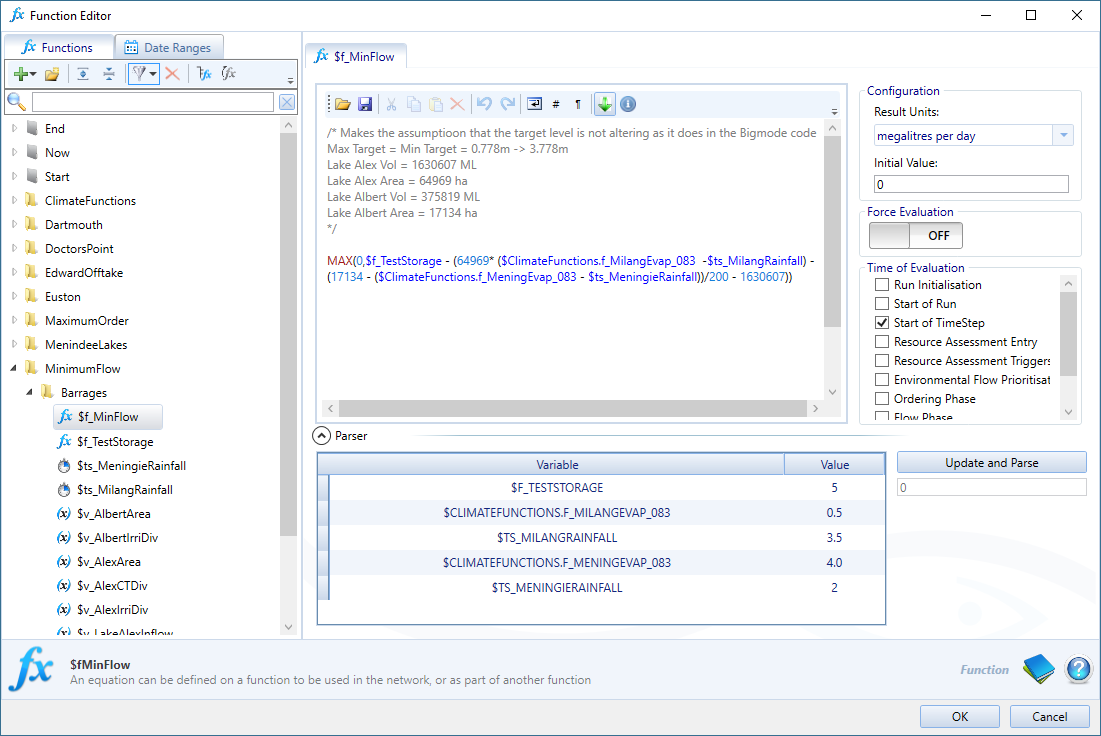 When functions are assigned to a model component, the function values may be used for further calculations and are not necessarily recorded explicitly. If you wish to view the function outputs over the model run, you can enable recording of a function using the Project Explorer (choose Miscellaneous » Functions). To record functions which are not used by a model element Force Evaluation will need to be turned on.

In addition to recording functions, function values may also be used for two types of logging to the Log Reporter during the run: 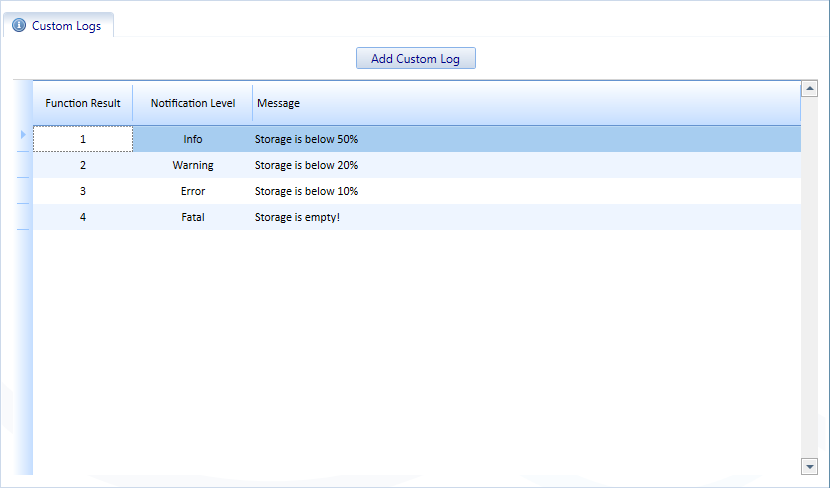