The GR4J model is a catchment water balance model that relates runoff to rainfall and evapotranspiration using daily data. The model contains two stores and has four parameters.

GR4J operates at a catchment scale with a daily time-step.

The GR4J modelling approach is mainly empirical (Michel et al., 2006), and consists of searching data for the most efficient model structures, with the objective of getting a general, efficient and robust model. The result being a parsimonious hydrological model, with successive improved versions. The main stages of the GR4J model development were:

The successive versions of GR4J were widely tested on large sets of catchments in France but also in other countries, using demanding testing frameworks (Andréassian et al., 2009). The GR4J model has also been compared with other hydrological models and has provided comparatively good results (see eg Perrin et al., 2001; 2003; Vaze et al., 2011).

The mathematical details provided below follow the presentation of the model made by Perrin et al. (2003). Figure 1 shows a schematic diagram of the model.

In the following, for calculations at a given time-step, we note P the rainfall depth and E the potential evapotranspiration estimate that are inputs to the model. P is an estimate of the areal catchment rainfall that can be computed by any interpolation method from available rain gauges. E can be based on long-term average monthly or daily values, which means the same potential evapotranspiration series could be repeated every year, although a recorded time series of E would be expected to give a better result.

All water quantities (input, output, internal variables) are expressed in mm, by dividing water volumes by catchment area, when necessary. All the operations described below are relative to a given time-step and correspond to a discrete model formulation (obtained after integration of the continuous formulation over the time-step).

Determination of net rainfall and PE

The first operation is the subtraction of E from P to determine either a net rainfall Pn or a net evapotranspiration capacity En. In GR4J, this operation is computed as if there were an interception storage of zero capacity. Pn and En are computed with the following equations:

This store can be considered as a soil moisture accounting (SMA) store. In case Pn is not zero, a part Ps of Pn fills the production store. It is determined as a function of the level S in the store by:

Equation 3 and Equation 4 result from the integration over the time-step of the differential equations that have a parabolic form with terms in (S/x1)², as detailed by (Edijatno and Michel, 1989).

In the other case, when En is not zero, an actual evaporation rate is determined as a function of the level in the production store to calculate the quantity Es of water that will evaporate from the store. It is obtained by:

The water content in the production store is then updated with:

Note that S can never exceed x1. A representation of the rating curves obtained with Equation 3 and Equation 4 is shown in Figure 2.

Figure 2. Behaviour of the production functions (Es/En: solid line; Ps/Pn: dashed line) as a function of storage rate S/x1 for different values of En/x1 or Pn/x1 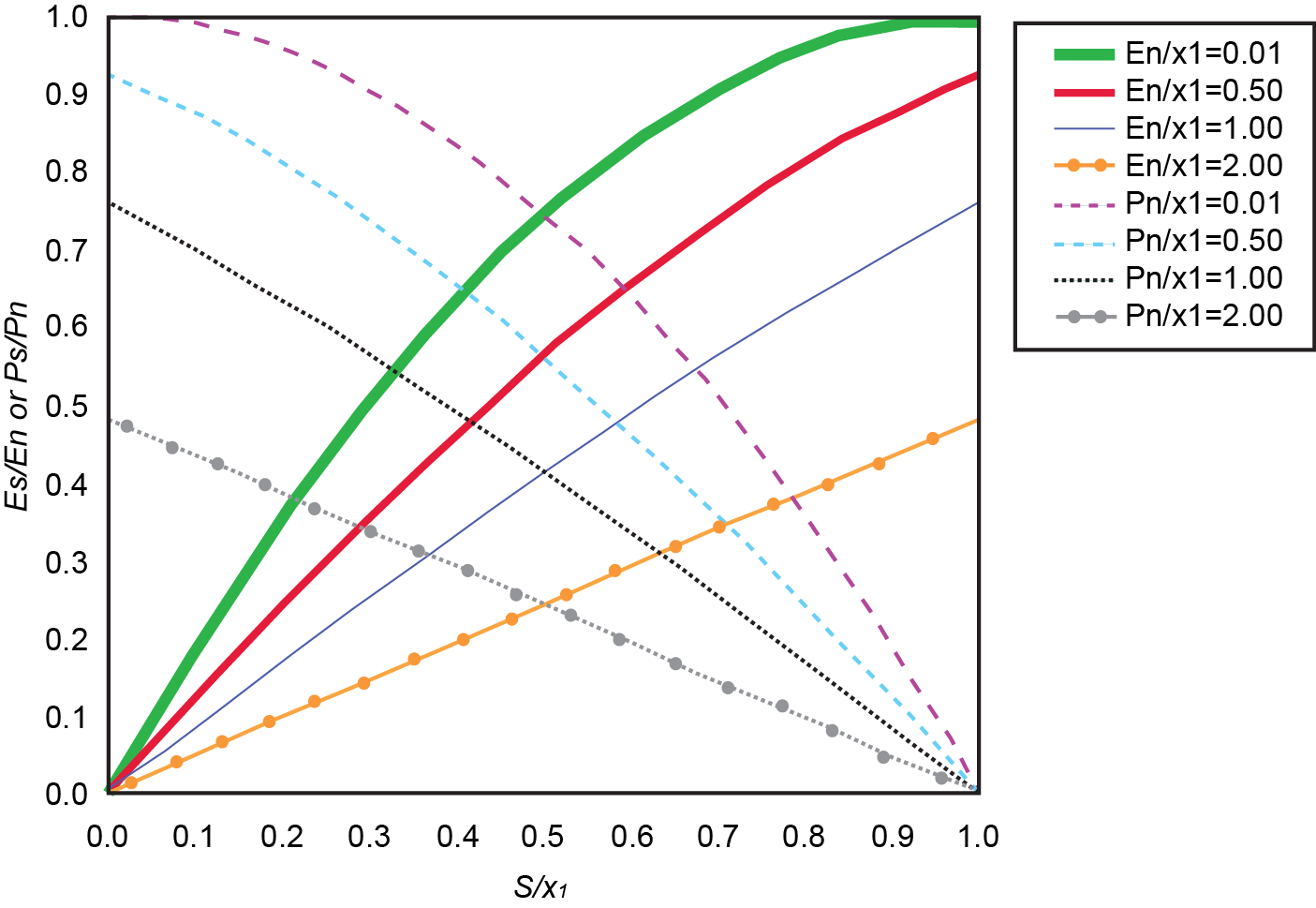 A percolation leakage Perc from the production store is then calculated as a power function of the reservoir content:

Perc is always lower than S. The reservoir content becomes:

The percolation function in Equation 6 occurs as if it originated from a store with a maximum capacity of 9÷4•x1. Given the power law of the mathematical formulation, this means that the percolation does not contribute much to the stream flow and is interesting mainly for low flow simulation.

The total quantity Pr of water that reaches the routing functions is given by:

SH2 is similarly defined by:

UH1 and UH2 ordinates are then calculated by:

j is an integer. 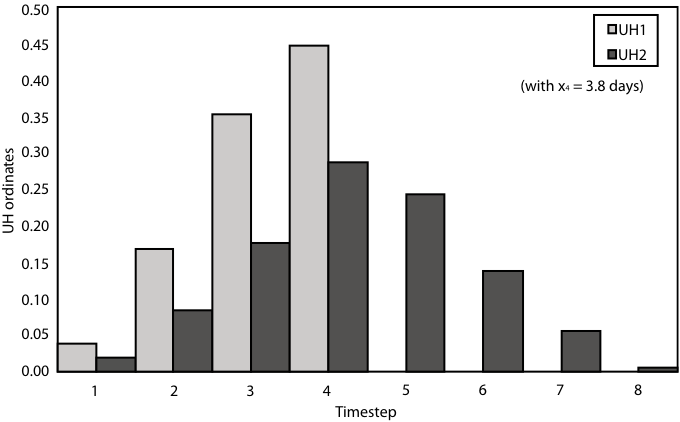 At each time-step, the outputs Q9 and Q1 of the two unit hydrographs correspond to the discrete convolution products and are given by:

A groundwater exchange term F that acts on both flow components, is then calculated as:

Where R is the level in the routing store, x3 its "reference" capacity and x2 the water exchange coefficient. x2 can be either positive in case of water imports, negative for water exports or zero when there is no water exchange. The higher the level in the routing store, the larger the exchange. In absolute value, F cannot be greater than x2: x2 represents the maximum quantity of water that can be added (or released) to (from) each model flow component when the routing store level equals x3. Note that Le Moine (2008) proposed an improved formulation of this function, with an additional parameter.

The level in the routing store is updated by adding the output Q9 of UH1 and F as follows:

The outflow Qr of the reservoir is then calculated as:

Qr is always lower than R, as shown in Figure 4. The formulation of the output of the store is the same as the percolation from the SMA store. The level in the reservoir becomes:

Note that, although the reservoir can receive a water input greater than the saturation deficit x3-R at the beginning of a time-step, the level in the reservoir can never exceed the capacity x3 at the end of a time-step, as shown in Figure 4. Therefore, the capacity x3 could be called the "one day ahead maximum capacity". This routing store is able to simulate long stream flow recessions, when necessary.

Figure 4. Illustration of the outflow Qr from the routing reservoir as a function of the level in the store after the introduction of input Q9 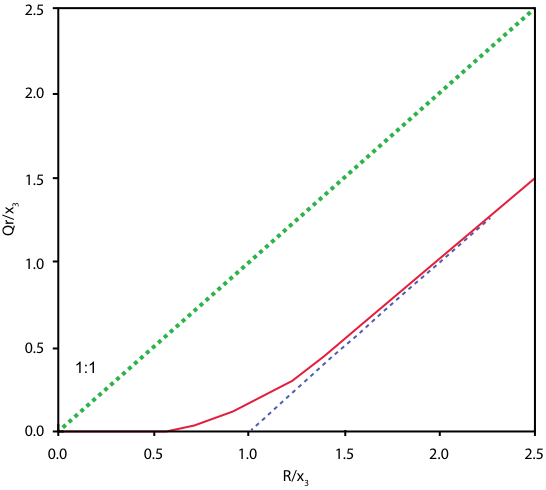 Like the content of the routing store, the output Q1 of UH2 is subject to the same water exchange F to give the flow component Qd as follows:

The model requires daily rainfall and potential evapotranspiration data. The rainfall and evaporation data sets need to be continuous and overlapping.

Information on parameters is provided in Table 2.  All four parameters are real numbers. x1 and x3 are positive, x4 is greater than 0.5 and x2 can be either positive zero or negative.

Table 2: Parameters in GR4J and their default values

Note that some coefficients in the model equations above appear as fixed values, eg. a power 4 in Equation 6 and Equation 20, a fixed split 10% - 90% of effective rainfall, a 2.5 exponent in the computation of the unit hydrographs, a 2.25 coefficient related to the percolation function in Equation 6. These values were chosen as those yielding the best model results in many different test conditions. They were fixed because leaving them free did not significantly improve (or even degraded) the model results while adding unhelpful complexity to the model structure.

Most optimisation algorithms used to calibrate the model parameter values require knowledge of an initial parameter set. This initial set may consist of median values obtained on a large variety of catchments (for example, see Table 3). Approximate 80 % confidence intervals for the four parameters are also provided in Table 3. They were derived from the 0.1 and 0.9 percentiles of the distributions of model parameter values obtained over a large sample of catchments. Given the small number of model parameters, simple optimisation algorithms are generally capable of identifying parameter values yielding satisfactory results. The choice of an objective function depends on the objectives of model user. Note that care should be taken to set appropriate initial conditions of the internal state variables in the model to avoid discrepancies at the beginning of the simulation periods. One year can be used for model warm-up at the beginning of each simulation.

Leaving both the k and C parameters at 0 has the effect of disabling the baseflow filter, and all runoff will be reported as quickflow.

The Source implementation of GR4J includes a baseflow filter component. This does not change the overall results of GR4J, but does introduce slow flow and quick flow as additional outputs, which can be useful in some circumstances. For example, the baseflow filter provides a means to use GR4J with the EMC/DWC constituent generation model. This baseflow filter is optional and there will be no effect on any results if the filter parameters (k and C) are both left at their default values of 0. Use of this filter is described in the section on observed runoff, and also Hydrological Recipes, Estimation Techniques in Australian Hydrology, R. B. Grayson et al. 1996, Cooperative Research Centre for Catchment Hydrology, which can be downloaded at: