IHACRES-CMD is a unit hydrograph model that converts time series of rainfall and temperature into a time series of runoff. The version of IHACRES used in Source has six parameters.

The model operates at a catchment scale and is typically run at a daily time-step. IHACRES has been used to model catchments that range from 490 m2 to 10,000 km2 and with time-steps from six minutes to one month (Littlewood et al., 1997).

The principal developers are the Integrated Catchment Assessment and Management Centre (iCAM), Australian National University, and the Institute for Hydrology, Wallingford, UK.

IHACRES is an acronym for "Identification of unit Hydrographs And Component flows from Rainfall, Evaporation and Streamflow data". IH is also an acronym for the Institute of Hydrology (now the Centre for Ecology and Hydrology, Wallingford, UK) and CRES is an acronym of Centre for Resource and Environmental Studies, Australian National University. The original IHACRES model is described in a paper by authors from these two institutions (Jakeman et al., 1990).

IHACRES model has been used in numerous applications and there are many different versions of the model (see reference list and bibliography). The IHACRES-CMD version currently implemented in Source is described in Croke and Jakeman (2004, 2005) and the references cited therein.

A version of IHACRES was included in Cooperative Research Centre for Catchment Hydrology’s toolkit and is in the eWater toolkit.

IHACRES-CMD is a continuous rainfall-runoff model used to generate estimates of runoff from rainfall and temperature (or PET) data. The conceptual layout of the model is shown in Figure 1. The box on the left represents a non-linear loss module that converts rainfall, P, into effective rainfall, U. Effective rainfall is the portion of rainfall that will eventually leave the catchment as runoff. Effective rainfall is routed through two parallel stores to produce streamflow.

where t is the time step, M is the CMD, P is rainfall, E is actual evapotranspiration (ET), U is drainage (effective rainfall). Units are millimetres per time step. The minimum value of M is 0, which means that the catchment is fully saturated, while a value greater than 0 indicates that there is a moisture deficit.

The effective rainfall (drainage) is assumed to be an instantaneous, linear function of the CMD given by:

where d is a flow threshold. If the CMD is greater than the threshold, no flow is produced. The actual effective rainfall at each time step is given by the integral of equation (2). Other forms for the drainage function could be used (see Croke and Jakeman (2004) for examples) but the linear form only is currently implemented in Source.

Evapotranspiration is calculated as:

where T is the temperature, Mf is the value of the CMD before taking into account ET losses, e is a temperature to PET conversion factor, and is a stress threshold. The parameter g represents the value of the CMD above which the ET rate will begin to decline due to insufficient water availability for plant transpiration. To reduce parameter correlation, it is calculated as:

where f is a multiplication factor on the flow threshold d.

The quickflow and slowflow equations are:

t is the time step

Qq and Qs are quickflow and slowflow, respectively. They are subject to the initial conditions Qq[t0] = 0 and Qs[t0] = 0

U is effective rainfall

vq and vs are the proportions of effective rainfall diverted to quickflow and slowflow, respectively, vq + vs = 1 and vq,vs > 0

Total streamflow Q is the sum of quickflow and slowflow:

It is more intuitive to express the parameters αq and αs in terms of the time constants τq and τs, respectively:

where Δt is the time step size.

The time constants τq and  τs represent the time required for the quickflow and slowflow responses to fall to 1/e of their initial values after an impulse of rainfall. They are subject to the condition τq < τs, which says that that quickflow should receed more quickfly than slowflow (Figure 2). 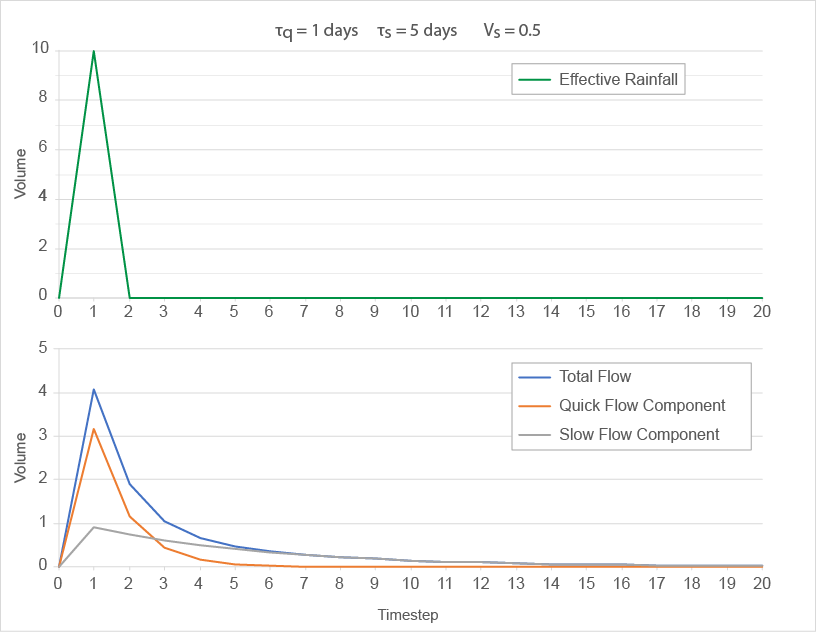 IHACRES-CMD is designed to represent the large-scale, conceptual rainfall-runoff processes occurring in a catchment. The model parameters may not be directly related to physical properties that can be measured in the field.

IHACRES-CMD requires three sets of time series data. These are:

IHACRES-CMD has six parameters requiring calibration as described in Table 1.

In addition, the internal state variables listed in Table 2 can be recorded.

Post, D.A. and Jakeman, A. J. (1999). Predicting the daily streamflow of ungauged catchments in S. E. Australia by regionalising the parameters of a lumped conceptual rainfall-runoff model. Ecological Modelling 123: 91-104.