Irrigator operates on a daily basis generating demands and extracting water to meet these demands via the water user and supply nodes. Irrigator maintains a daily water balance for each cropping area during its planting season, to calculate the daily soil water deficit and an irrigation requirement. The irrigation requirements are used by the Water User to generate orders and opportunistic requests and to subsequently place orders and requests and to extract water from a water source.The model can be applied in both regulated and unregulated systems.

These same Irrigator Demand Model configuration options described here at the Water User Node can be used to represent rain-fed agriculture when modeled in a Catchments Scenario using the Agricultural Runoff Rainfall-Runoff model.

Note: The Irrigator model is based on FAO56 - "Crop evapotranspiration - Guidelines for computing crop water requirements - FAO Irrigation and drainage paper 56, and is available here. Prior to configuring an Irrigator Demand Model on a Water User node, you must specify crop factors for the entire scenario using Edit » Crop Parameters. Crop factors defined in this way are accessible for each water user node. More details regarding this can be found at IQQM Crop Demand Model.

This describes a number of parameters (outlined in Table 1) that can be set at an irrigation district level.

Irrigation modifiers are included in Source to allow a simple mechanism to reduce irrigation intensity for recurring time periods. To enable a target modifier, right click on the demand model and choose Add Target Modifier (as shown in Figure 1). This provides equivalent functionality to demand reductions in the PRIDE model. By specifying a target modifier, a new soil depletion target is calculated during the specified period that results in a reduction in irrigation demand equivalent to the modifier you specified.

The district requirement is adjusted to allow for any district delivery supply escapes and losses associated with delivering water to the district. The volume removed before getting to the crop is called the escape volume. The escape volume can either be lost from the system or returned back to the water user as a return flow. This is an optional parameter in the demand model and can be added by right clicking Irrigator, then choosing Supply Escape. It is expressed as a percentage.

Returned water is surplus drainage water from irrigation or from rainfall runoff. This water can be redirected into the on farm storage or otherwise can be returned to the river via a confluence node. This is optional in the demand model configuration and can be added by right clicking Irrigator and choosing Add Return Efficiency. This is also expressed as a percentage.

Note: For Average Evaporation, the default number of time-steps is 7. For Average Rainfall, this is 0. 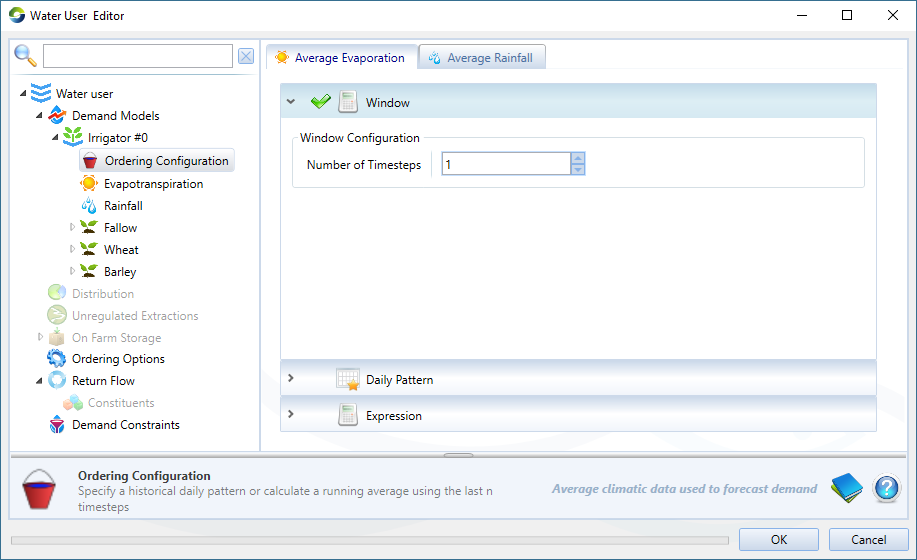 There are two parameters that can be defined for climatic data: 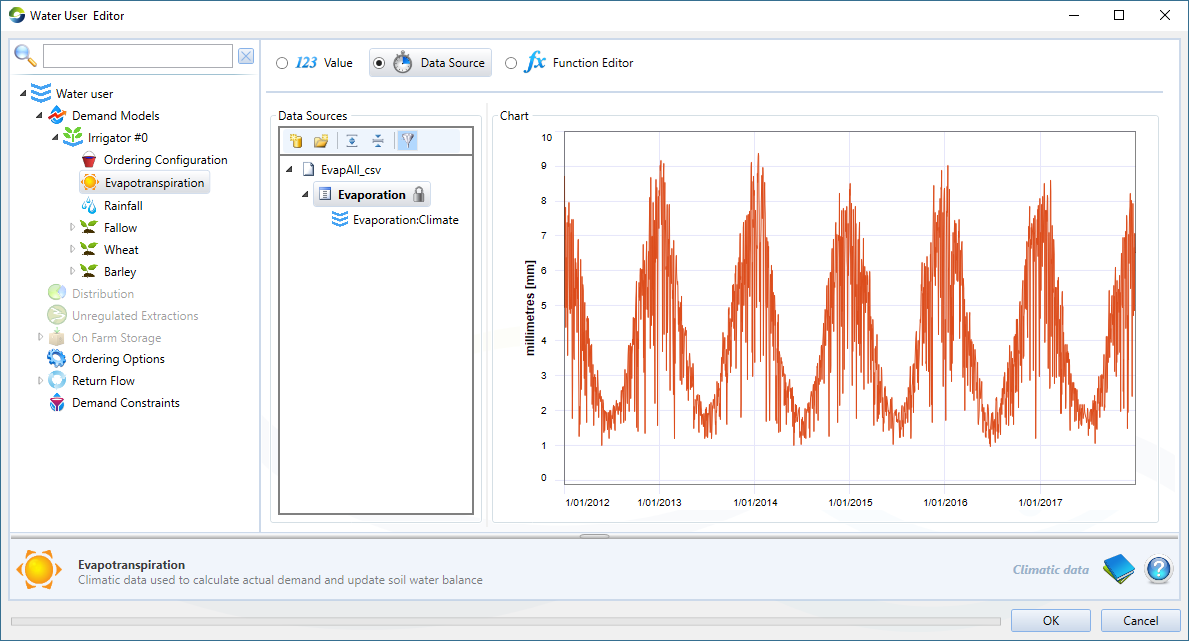 Maximum Irrigated Area which is not being cropped is referred to as fallow. Every irrigator demand model has, by default, one fallow area. Fallow area occurs between cropping seasons or during the irrigation season if the maximum developed area is not planted. The fallow cropping area does not order or receive irrigation water. However, a soil water balance of the fallow crop is maintained, and impacts on rainfall runoff from the fallow area and the initial soil moisture assigned to new crops area. The depth of rootzone for fallow represents the depth of soil from which evaporation can occur.

This allows representation of runoff from undeveloped areas. These areas can not be used for crops unlike fallow. This is relevant where on farm storages can harvest this runoff. The undeveloped area does not interact with cropped or fallow area models. It does not cause orders.

This is used to define parameters specifically related to the crop to be planted. To add a new crop, right click Irrigator and choose Add Crop Type. Figure 4 shows an example of a crop, named Wheat, that has been added to the model. Consult the Source Scientific Reference Guide for detail on the parameters for configuration.

A list of crop names and associated crop types, can be exported to a .csv file and then imported at another water user node (or Agricultural Runoff Rainfall-Runoff Model). The crop types must already be configured in the list of generic Crop Parameters at Edit » Crop Parameters. The Import and Export options are available on the right click at the level of the Irrigator demand model: 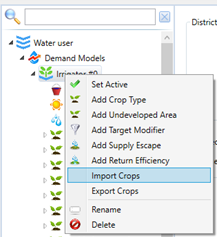 Crop specific soil factors can be defined on the same page as General Configuration (see Figure 4). Soil moisture capacity is specified at the district level and this is assumed constant for all crops in the district. You must also specify Depth of the Root Zone, Depletion Factor and Initial Depletion for each crop.

Planting decisions are represented as a trigger in the Irrigator Demand Model and include a decision type, plant date, optional harvest date and an under irrigation factor. The number and size of cropped areas changes over time in response to planting decision triggers and available water.

Note: Irrigator allows more flexible representations of crop based planting decisions than earlier crop demand models, which better align with economic modelling. If the planted area is defined using the Function Editor, then other factors such as economics can be considered. In addition, planting decisions can be reviewed periodically during the season. This allows decisions to be made to cut back the irrigated area, reduce irrigation intensity or potentially trade water if there is insufficient water to finish the crop. 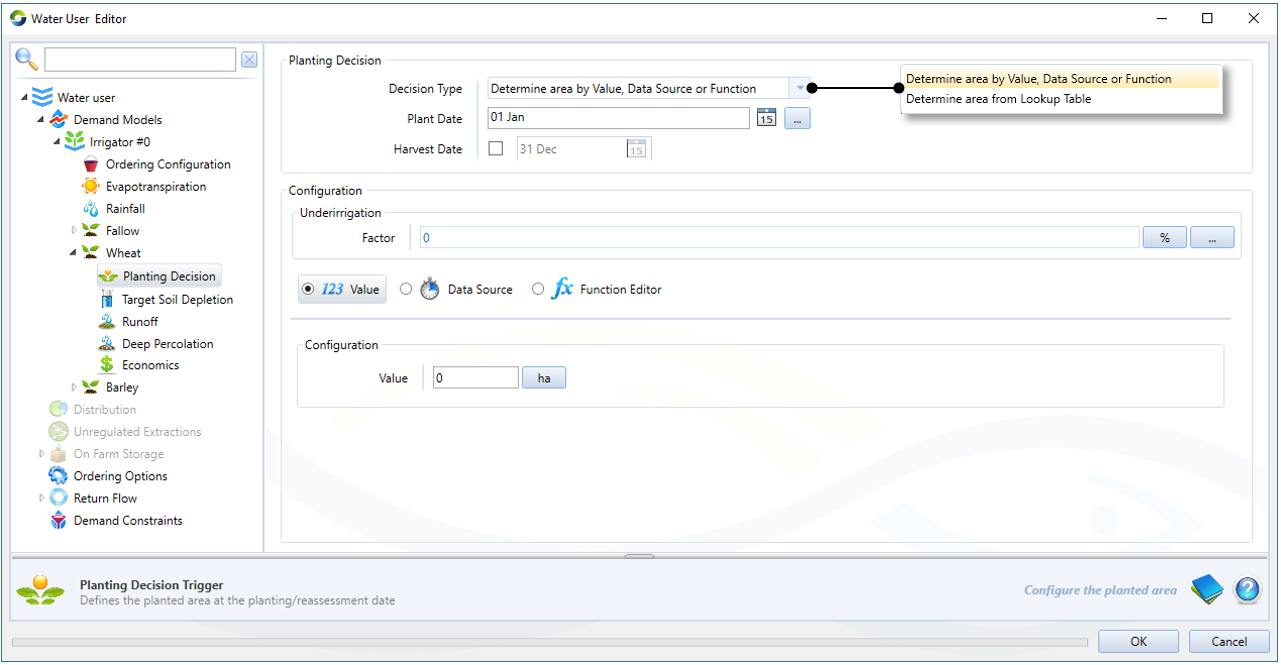 If Lookup Table is choosen as the Decision Type, you must define a configuration table (as shown in Figure 6), which can be entered manually or imported using the Import button. This table is used to determine the Area and Underirrigation Factor for a given value of Available Water. Additionally, for values of Available Water that are not present in the table, linear interpolation is used to determine the other two parameters. For the example shown in Figure 6, if available resources in a RAS are 15000ML, the planting area will be 3000ha based on linear interpolation between (10000, 2000) and (20000, 4000). The available resources from water user (order debit type) is determined from the current account balances plus on farm storage available water, as at maximum travel time, released water in the river is zero.

The amount of water in the rootzone is defined in terms of rootzone depletion, which describes the soil water deficit of the rootzone relative to field capacity. The target depletion can be specified as a pattern, a constant value, a time series, or as a function.

Three target depletions can be specified (as shown in Figure 1):

Note that if ponding is required a negative soil moisture target should be specified. 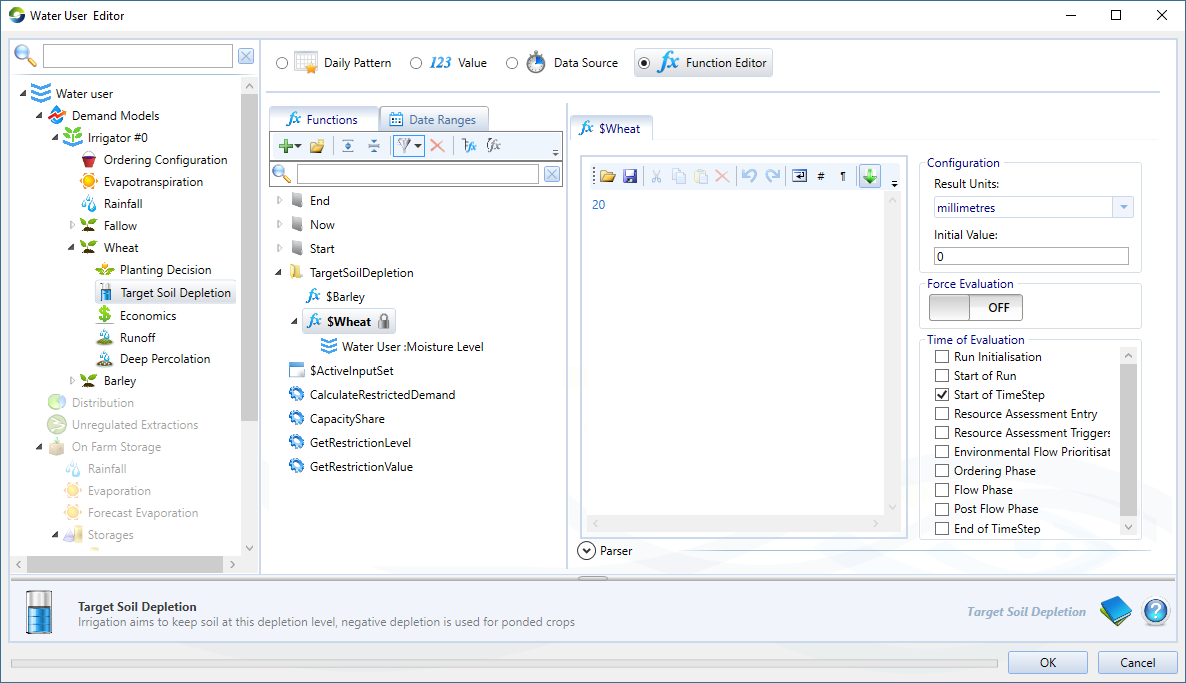 The Return Efficiency parameter is used to maximise return flow set efficiency to 100. You must also specify a return efficiency, which means that the proportion of runoff that is returned to the water user, which can be stored in the farm storage or returned to the river. The configuration window is similar to that shown in Figure 7.

You can configure some simple economic considerations in Irrigator, as shown in Figure 8. To enable economic values to be configured for a crop, right click on the crop and choose Enable Economics. A simple, linear crop water production function is used to predict the reduction in crop yield resulting from water stress. Irrigator records the relative yield as a daily time series. The following parameters must be specified as a function: 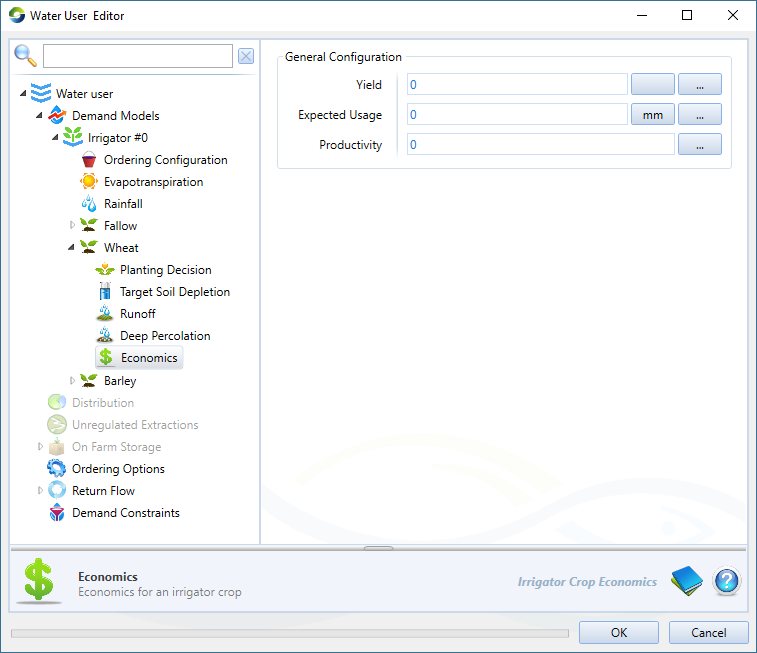 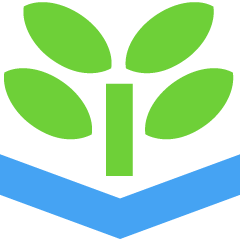