Water ownership deals with the assignment and tracking of water as it is stored in, transits through, and exits river systems. This is an important aspect of water management, as it allows resource sharing amongst owners with the ability to determine how much water an owner has, and where it is located.

Ownership is a combination of the following three systems in Source:

They communicate with each other via an ownership system, which is created by default when ownership is enabled.

Note: Within an ownership system, ownership of water is conserved unless it is explicitly transferred. This applies to both nodes and links.

Ownership must be enabled individually for each scenario. Once a scenario has been created, enable ownership as follows:

When ownership is initially enabled in Source, a single ownership system is created by default, comprising of the following elements:

Note: Once an ownership system has been created, it cannot be deleted.

An ownership system allows a defined set of owners to share water in a chosen section of the river network. A scenario may have multiple ownership systems and is made up of several network elements (Figure 3). It has a set of owners that share water within the system’s boundaries, where each of these owners lend water surplus to other owners with a deficit via the borrow and payback systems. Lending owners can be paid back later at a nominated storage or implicitly through the resource assessment process. It also shows the link sharing rules that are applied throughout the ownership system. Murray style losses indicate whether Murray style high flow losses will apply on links with flow above a configured threshold. Additionally, you must also specify whether other types of fluxes (Time series, Lateral and Operational Excess) will be distributed as a fixed ratio or proportionally amongst owners in the ownership system.

When ownership is enabled, a river model consists of owners that have a share of the total available water (resource). There is one owner by default (named Owner 1) who initially owns 100% of the water in every node and link. To add additional owners in the system, click Owners, then add them in the table. Also specify the various proportions for each owner (Figure 4). In addition to the parameters listed, for each owner, their percentage of the various link’s parameters must be specified as well.

In Source, ordering deals with passing orders up the network whereas ownership handles these orders being distributed to owners (coming down the network). As owners request a share of the resource, orders travel upstream in the network and each node passes it up and might make changes to the order depending on the node’s characteristics, or its configuration. The ordering phase needs to consider the ownership of losses and gains such that when the order reaches a storage, the correct volume of each owners’ water is released. It also needs to consider ownership of maximum and minimum order constraints.

Note: In Source, ownership is based on rules-based ordering.

For demand models/water user, which owner orders the water depends on the distribution system used:

Note: You can have only one ownership system in a resource assessment system. 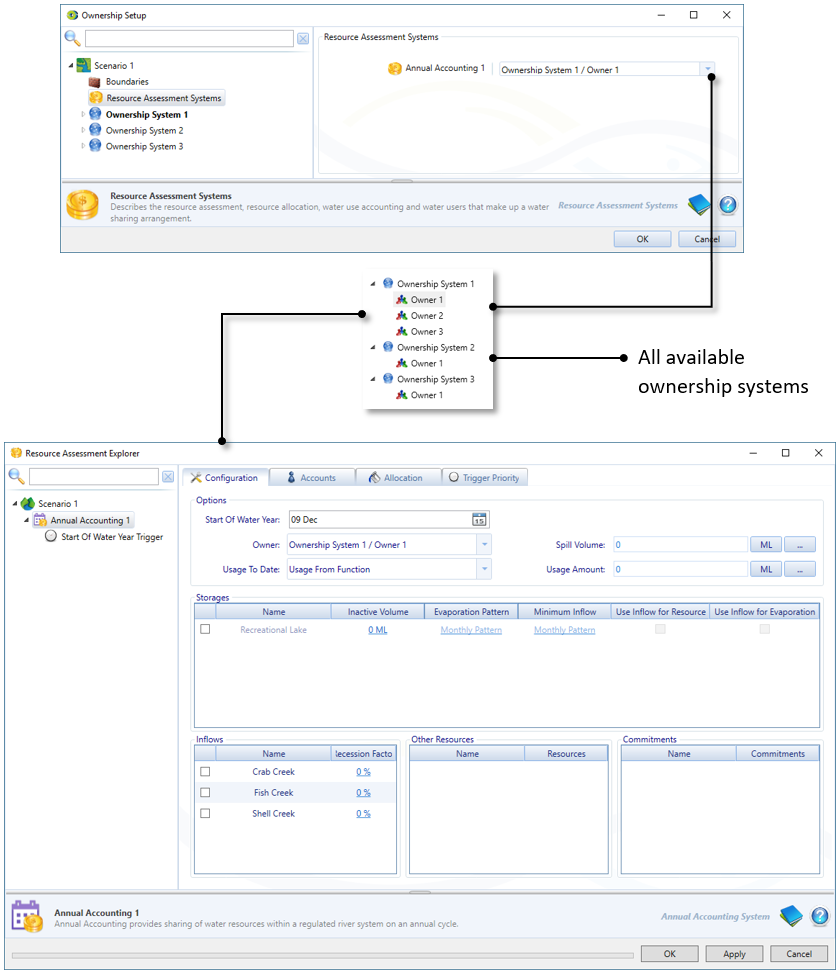 At every node in the network where an inconsistency is found (such as overlap of ownership systems at a node), an error appears in the Ownership Setup dialog showing details of the discrepancy. An example of this is shown in Figure 6. 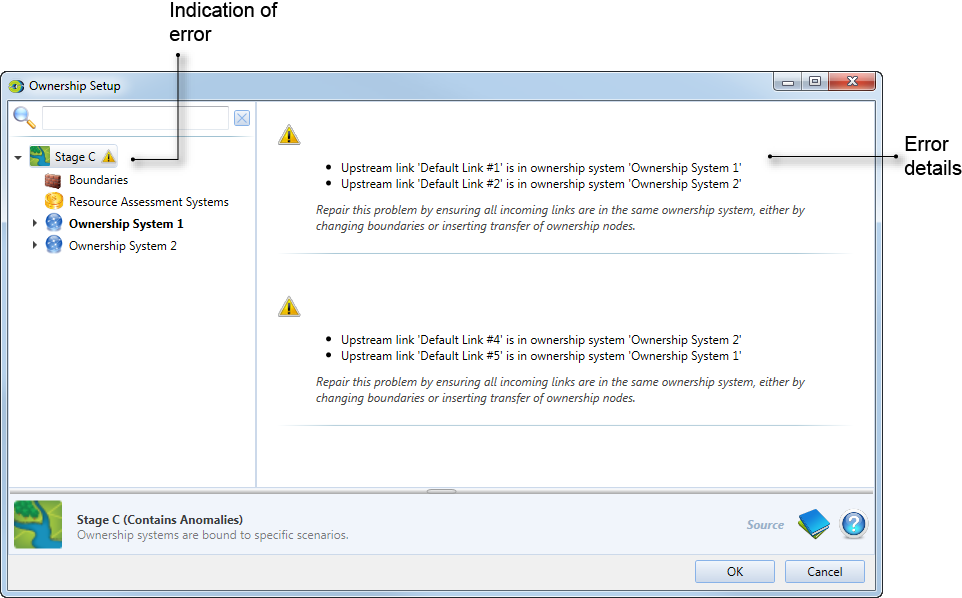 Note: When shares are allocated to multiple owners in a system in Source, they are effectively unit shares, ie. they are scaled to add up to 100%.

Ownership can be temporarily suspended at storages where you have specified an override owner, resulting in the model operating as one where ownership has been disabled.

The result of suspending ownership is:

Note: When ownership is enabled once again, the system is restored to the state it was in before ownership was suspended.

The 640/480 rule applied at the Menindee Lakes (located on the lower Darling River in NSW) is an example of a situation where ownership is suspended temporarily (between the owners NSW and Victoria). It operates as follows:

To understand how ownership has operated in a model, you must observe its effects on each of the three systems that make up ownership. Enable the following parameters for recording (under Model Parameters):