GWlag is both a rainfall runoff model and a constituent (salt) generation model. Descriptions of both these aspects of functionality are provided in this section.

Catchment models have traditionally focused on estimating total stream flows with less emphasis on modelling the groundwater component. Greater pressure on water resources and the environment, as well as the need to better model constituent generation, has led to more interest in low flow conditions, particularly how these are impacted by groundwater - surface water interactions.

GWlag operates at the catchment scale and daily time-step.

The principal developer is eWater building on earlier work as noted below.

GWlag is a plugin, but is available in the plugin folder that accompanies Source installations.

The conceptual model used inisation of the GWlag builds on the structure of the 2CSalt model (Stenson et al. 2005; 2011) and BC2C (Gilfedder et al. 2009). A gauged catchment is subdivided into sub-catchments using terrain analysis of surface topography and a knowledge of the scale of the underlying Groundwater Flow Systems (Coram et al. 2000).

Each sub-catchment is further divided into Functional Units (FUs), which are defined as areas with the same combination of soil, land-use and climate. For each of these FUs, water balances are calculated using the 1-D PERFECT crop water balance model (Littleboy et al. 1992). PERFECT (Productivity, Erosion, Runoff Functions to evaluate Conservation Techniques) considers climate, crop type, and soil parameters, and predicts surface runoff and deep drainage. The PERFECT results from all FUs are summed to the sub-catchment level.

Figure 1. Simplified flowchart of the conceptual model for GWlag 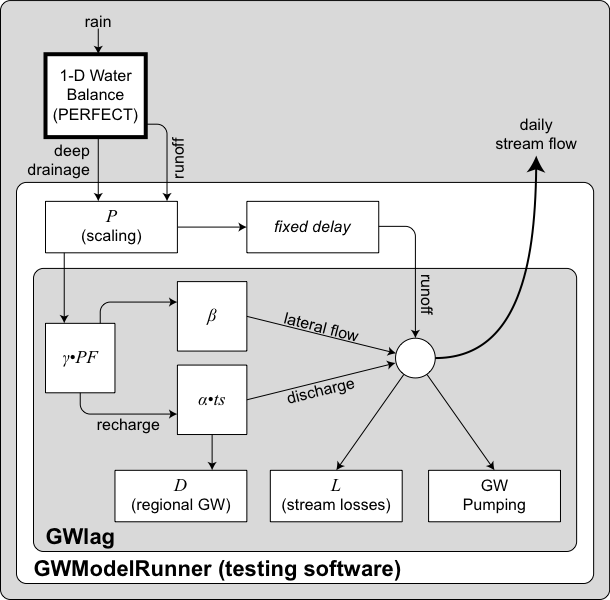 The SimpleGWSaltModel uses estimated spatial representations of groundwater salinity to a sub-catchment scale. Salt is treated as conservative and is tightly linked to slow flow discharge to the stream. It is designed to give an estimate of groundwater concentrations of salt to upland streams.

The PumpingImpactModel simulates the impact of groundwater extraction on stream flow and loads and is applied at a catchment scale through the implementation of one or many pumps within each sub-catchment. Pumps can be either spatially implemented or behave as a simple abstract loss. Each pump has a series of pumping events where water and constituents are removed for a specified period of time at a specified rate. As each event may take many years to fully impact the stream, each event is tracked and combined with all other events for a particular sub-catchment, giving an overall impact at each time-step. The PumpingImpactModel may be applied to one or many sub-catchments within Source.

GWlag generates daily time series inputs of surface runoff and deep drainage. These inputs can be scaled if required. The surface runoff contributes directly to stream flow. Deep drainage is split into a lateral (quick) and a vertical recharge (slow) component. The lateral flow pathway is delayed using a user parameterised exponential function before contributing to stream flow. The recharge component is delayed using a groundwater response time calculated from hydrogeology and topography (saturated hydraulic conductivity, storativity, aquifer thickness, aquifer flow length, and basement slope). This response time can then be scaled by a whole-catchment user-defined parameter. GWlag can deal with losses by removing groundwater and/or removing stream flow.

There can be inconsistencies in the measured rainfall data used to drive the catchment runoff model. For example, this has been shown to be a specific issue in the Namoi River catchment (Croke et al. 2006; Herron and Croke 2007). This issue can be handled by changing rainfall in the 1-D water balance model; although due to long run times this would need to be a separate exercise explored outside Source.

GWlag can allow for changes to catchment rainfall with a scaling parameter (P). GWlag uses P to scale deep drainage and runoff from the lumped 1-D Water balance models.

It is likely that P will be set to 1 in most catchments but if calibration/optimisation leads to a value of P which is not close to unity, it is likely that the re-running of the 1-D Water balance model with modified rainfall would be required to be undertaken.

DD is split into lateral flow, and groundwater recharge using a partitioning fraction (PF). PF is determined using the method of Rassam & Littleboy (2003) (ie. calculated, not user defined), which was also used in the 2CSalt model (Stenson et al. 2005; 2011). The partitioning can also be scaled using γ (calibration parameter) if desired:

A linear-storage-discharge relationship is used to predict groundwater response at a sub-catchment level. A groundwater storage term (V) is calculated for each time-step but this is used to provide the response only, and is not meant to be considered explicitly.

DGW is the groundwater discharge to stream (m3/day)

The groundwater time scale is determined in a similar manner to the BC2C model (Gilfedder et al. 2009). This uses the idealised groundwater analogue that was developed by Walker et al. (2005) which captures some of the features of real, sloping aquifer systems (see Figure 2). It provides a simple approach for estimating the response of aquifers to changes in recharge, and for predicting the time-scale between changes in recharge and subsequent changes in discharge.

Much of the literature on groundwater flow over sloping beds have a full-thickness seepage face as the downstream-end boundary condition (eg. Schmid and Luthin 1964; Childs 1971; Towner 1975; Verhoest and Troch 2000). This leads to a convex groundwater profile. The method in Walker et al. (2005) maintains a constant head boundary at the aquifer outlet, with the head at the elevation of the land surface - mimicking a stream overlying a thick and saturated zone. This boundary condition tends to result in a concave groundwater profile.

While the extended Dupuit-Forchheimer assumption of streamlines parallel to the bed is typically used for modelling flow over sloping beds (eg. Wooding and Chapman 1966; Childs 1971). Chapman (1980) considered that the horizontal streamline assumptions remained satisfactory up to a bed-slope of at least 10 degrees. Henderson and Wooding (1964) provided a solution for groundwater discharge from a steeply sloping aquifer using the classical Dupuit-Forchheimer assumption of horizontal streamlines. In Walker et al. (2005) the mathematics is modified to allow for the inclusion of much flatter aquifers - with a focus on estimating changes in groundwater flux to a stream.

Groundwater time scale, ts, in equation 5 is calculated as follows.

S is storativity (volume of water released from storage in an aquifer per unit decline in hydraulic head, per unit area of the aquifer. Storativity is a dimensionless quantity, and ranges between 0 and the effective porosity of the aquifer)

a is the aquifer basement slope

Δh is the change in elevation of land surface (m)

d is the aquifer thickness

The calibration parameter, α (in equation 5), is applied globally, while the groundwater time scale, ts, is calculated for each individual sub-catchment. Thus, the variability of groundwater responses across the catchment is maintained, but can be adjusted to provide a better fit to gauged information.

GWlag uses a linear-storage-discharge relationship to predict lateral flow response. A storage term (VLF) is calculated for each time-step but this is used to provide the response only, and is not considered explicitly.

DLF is the lateral flow discharge to stream (m3/day)

VLF is a storage term

In addition to the groundwater and lateral flow delays, GWlag can allow for three different types of "loss".

Not all recharge appears as stream flow, for example, some recharge provides water to the regional groundwater system which may discharge outside the catchment or directly to the ocean.

Fixed losses from the stream (L)

Incorporation of fixed losses can be used to improve the modelling of zero flow periods, in areas where streams are losing. It provides the capacity to model losing streams, including no-flow periods that are likely to occur after prolonged dry periods.

Loss of water from the stream is calculated using:

REMOVE is an input/calibration parameter

If L is calculated as being less than zero it is set to zero.

Variable groundwater pumping losses are additional losses that occur in areas with extensive groundwater development. These losses are calculated using classical stream depletion models (Glover and Blamer, 1954) which require knowledge of pumping rates, distance from stream/gauge and aquifer parameters (see also, Evans, 2007). GWlag will recognise both local and regional impacts of pumping, depending on the depth of the bore.

Explicit groundwater pumping capacity is included in GWlag for two reasons: (1) if significant changes in groundwater development occur in the middle of a long simulation, then the depletion losses will be time-variant and hence a constant loss term will result in inferior calibration, and (2) to allow for scenario modelling to predict the impacts of proposed groundwater development on flows.

Pumping impacts are modelled as follows:

QP is the impact of pumping (m3/day)

P is the pumping rate (m3/day)

Erfc is the complementary error function

a is the distance of pump from sub-catchment outlet (m)

D is the aquifer diffusivity (m2/day)

K is the saturated conductivity (m/day)

d is the aquifer thickness (m)

S is the storativity

t is the time since start of pumping.

The impacts of groundwater pumping are calculated for each bore (or borefield). These impacts are estimated and their effect is to remove water from the gauged catchment outflow. For each pump (ie. individual bore, or borefield), the following inputs are required:

The modelled stream flow will be:

DLF is discharge to stream flow from ‘lateral flow’ (m3/day)

DGW is discharge to stream from groundwater (m3/day)

If Q, in equation 14 is calculated to be less than zero, it is set to zero.

Note that this section is related to GWlag as a constituent generation model rather than as a rainfall runoff model. The explanation of this functionality is included here for completeness.

GWlag is a capable of modelling salt generation from sub-catchments and salt exports in stream flow.

SALTgen is the salt generated from sub-catchments (kg/day)

DLF is the discharge to stream from ‘lateral flow (m3/day)

DGW is the discharge to stream from groundwater (m3/day)

RAINSAL is the rainfall salinity (kg/m3)

The model makes the following assumptions:

GWlag is not applicable in areas with regulated surface flow. It is suitable for local and intermediate groundwater flow systems and is intended for areas which are drained by surface water streams.

Model parameters are summarised in Table 1 and Table 2.

In addition, the variables listed in Table 3 can be recorded.