The principles of modelling the physical behaviour of storages have been presented in many text books over many years. Recent examples include books by Loucks and van Beek (2005), and McMahon and Adeloye (2005).

A storage is represented as a node. It is connected to a single upstream link and can have multiple downstream links.

The following definitions supplement those in the eWater Glossary:

An entity that owns a share of water in a river system; not the same as a water user.

Spillway crest level for an uncontrolled spillway; for a controlled (gated) spillway, the maximum level for water supply storage based on operating and management decisions such as to maintain airspace for flood mitigation.

The level/volume below which water cannot be released from the storage, that is equal to the lowest outlet invert level. This may differ from the inactive storage (or minimum operating) level, which may be defined at a higher level for water quality or power generation purposes

Any flow into or out of a storage, including inflow, controlled releases, spills, rainfall, evaporation, leakage and groundwater loss or gain.

The minimum rate of discharge from a storage when all outlets are closed and flow is only over spillway or through an uncontrolled outlet (including leakage).

water released in excess of the downstream requirements.

Source assumes that any flows (fluxes) into or out of the storage are averaged across the time-step. Flows and changes in storage volume are calculated by integrating across the time-step, assuming the reservoir has a level pool. The calculation process involves defining a series ofuser definedpiecewise linear relationships which describe storage dimensions, discharge relationships, and any losses and gains (such as evaporation and groundwater fluxes).

The calculation of storage mass balance during a model time-step is based on solving for the change in storage that occurs taking into account inflows, releases and all other loss and gain fluxes (eg net evaporation, seepage and spills).

Inflow is generally estimated to the dam wall, and there is potential to double count water from the drowned section of the dam. This can be significant, especially where the reservoir area is a significant proportion of the catchment area. Hence, an adjustment is necessary to minimise the effect of double counting, and this is achieved by calculating the net evaporation loss. The net evaporation loss is the difference between the actual evaporation from the open water surface of the reservoir (Eo) and the actual evapotranspiration (Et) from the reservoir area assuming no dam (McMahon and Mein,1986: p136-137 & p185).

Linsley et al (1982) summarise the requirement for adjusting evaporation losses for the effect of the reservoir area as follows: "In reservoir design, the engineer is really concerned with the increased loss over the reservoir site resulting from the construction of the dam, ie. reservoir evaporation less evapotranspiration under natural conditions". This holds equally for modelling the behaviour of existing reservoirs. The mass balance calculations described below take this adjustment into account.

(a) Controlled outflows with gated spillway 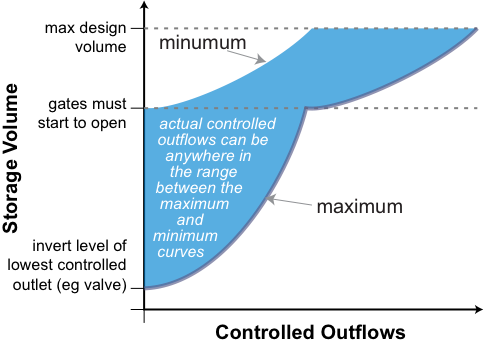 (b) Outflows with uncontrolled spillway 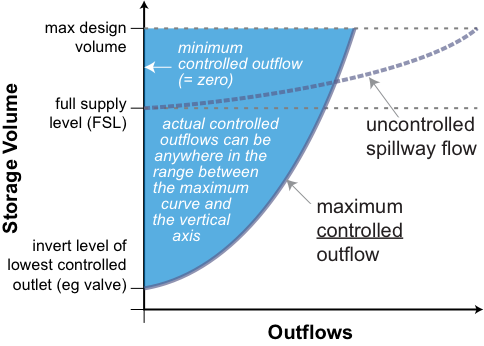 During the flow phase, the potential minimum and maximum discharges from a storage are calculated for a given model time-step based on current inflows, flux data and theuser definedpiecewise linear relationships. If orders on a given outlet are less than the maximum discharge, the order can be released. Otherwise, the order is constrained at the maximum allowable discharge. The steps involved in these calculations for a given model time-step are discussed in the next sections, but in summary they are as follows:

m, c slope and intercept of the segment, respectively

The mass balance equation is (Equation 2):

S groundwater flux (note a negative value of S means a gain to the storage; a positive value is equivalent to seepage)

Interpolation is needed to bring all of these to a common set of storage volume, area and depth coordinates.

Step 2: Calculate the slope (m) and intercept (c) of each segment of the PWL relationships between storage volume and each individual flux derived in the previous step (see Figure 2) using Equations 3 and 4:

Figure 30. Example of a piecewise linear relationship between a flux and storage volume

F1, F2 dependent variable (eg fluxes) at each end of a segment in the PWL relationship

Recall that the minimum controlled outflows are usually zero in all segments of the PWL relationship, except that when there is a gated spillway there may be mandatory minimum release requirements once the volume in the storage exceeds certain thresholds, as illustrated in Figure 1(a). Also, as inflows are constant, m = 0 and c = inflow value for inflows.

Step 3: By combining c and m values for individual fluxes by substituting into Equation 2, PWL relationships expressed in terms of c and m values are derived for:

Step 4: To find the storage volume at the end of a time-step and outflows during the time-step, it is necessary to integrate Equation 1 with respect to time. The general form of the resultant equation is Equation 5:

Equation 5 applies only when m ≠ 0, ie. when the net flux through the storage is variable across a segment of piecewise linear relationship. When m = 0, Equation 6:

Step 5: The segment of the PWL relationships the volume at the start of the time-step lies in is established by searching for the case where:

Step 7: The validity of the above assumption is then checked:

Step 8: If not, then the required result lies in another segment of the PWL relationship (higher or lower), and it is necessary to establish the fraction of the time-step when the storage volume goes out of the current segment. This is calculated using Equation 8:

t time that storage volume exits current segment, as a fraction of the model time-step

te cumulative time since start of time-step that storage volume exits current segment, as a fraction of the model time-step (noting that initially te= 0)

The remaining fraction of the time-step is tr = 1 - te.

Step 9: Individual flux volumes (Net Loss, S, each component of D) for the current segment are determined using the value of t from step 7 or step 8 as appropriate, using Equation 9:

mF slope of the linear relationship for the individual flux

mT slope of the linear relationship for the Net Flux

cF intercept of the linear relationship for the individual flux

cT intercept of the linear relationship for the Net Flux

Step 11: When t = 1 orders are compared with minimum and maximum release rates:

Step 12: If there are orders in this time-step and minimum release < orders < maximum release, steps 4 to 11 are repeated using constant outflows from step 11 (ie. m = 0 and c = outflow value) instead of the relationships that are a function of storage volume used previously.

Step 13: The final storage volume is recalculated by substituting the individual flux volumes into Equation 13:

I, Eo, P, R, S, U and O are calculated individual flux volumes

The result is checked to ensure it is equal to the final result for vt obtained in step 6 (ie the result from Equation 5 with t = 1).

Calculations for a given time-step where there is more than one outlet but only one owner.

This functionality is still under development as at September 2011 (Source version 2.16).

This functionality is still under development as at September 2011 (Source version 2.16).

For modelling forreal timeriver operations using River Operator, in Source, there is a ‘warm-up’ period where the model is run to ensure modelled fluxes equal observed values. Forecast releases are then used to predict the river response to a range of scenarios before the operator makes a decision on how much water to release or which path (multiple supply paths) to send water down. Source provides functionality which allows the user to manually override the simulated releases and storage volume/levels during the observed period. It also provides the ability to input forecast releases that override the model values.

Points to note include:

Data requirements are discussed in the Theory section above. Full details on input data are provided in the Source User Guide.

Where the storage volume rises above the highest value specified in the PWL relationship, values are linearly extrapolated using the slope of the line for the last twouser definedco-ordinates. It is preferable for the user to define all PWL relationships to include extremes, as linear extrapolation may not appropriately represent the desired behaviour.

The PWL relationships must start at a zero volume or zero discharge, and are not extrapolated below the lowest values.

Storage parameters the user may want to use in calibration mode include:

This uses the functionality for overriding calculated values discussed in the section on Manual overriding of certain calculated storage parameters above.

Outputs from the storage node include the following results: