The documentation of this model is from Podger (2004) with some modifications to suit the needs of the SRG.

SMARG is a catchment scale model and operates at a daily time step.

The version of SMARG implemented in Source comes from the CRC for Catchment Hydrology Rainfall-Runoff Library (RRL), where it is referred to as the soil moisture and accounting model (SMAR) (O’Connell et al., 1970; Kachroo, 1992)

SMARG is SMAR with modification to route surface runoff and the groundwater contribution to the stream separately (Kachroo and Liang, 1992).  This modified model is also often referred to in the literature as SMAR rather than SMARG (e.g. Podger, 2004; Tuteja and Cunnane, 1999; Vaze et al., 2004).

Automatically provided with Source.  SMARG is also available through the Rainfall Runoff Library (RRL) through http://www.toolkit.net.au/Tools/RRL.

SMARG consists of two components in sequence, a water balance component and a routing component. A schematic diagram of the SMARG model is shown in Figure 1. The model utilises input time series of daily rainfall and pan evaporation data to simulate stream flow at the catchment outlet. The model is calibrated against observed daily stream flow. 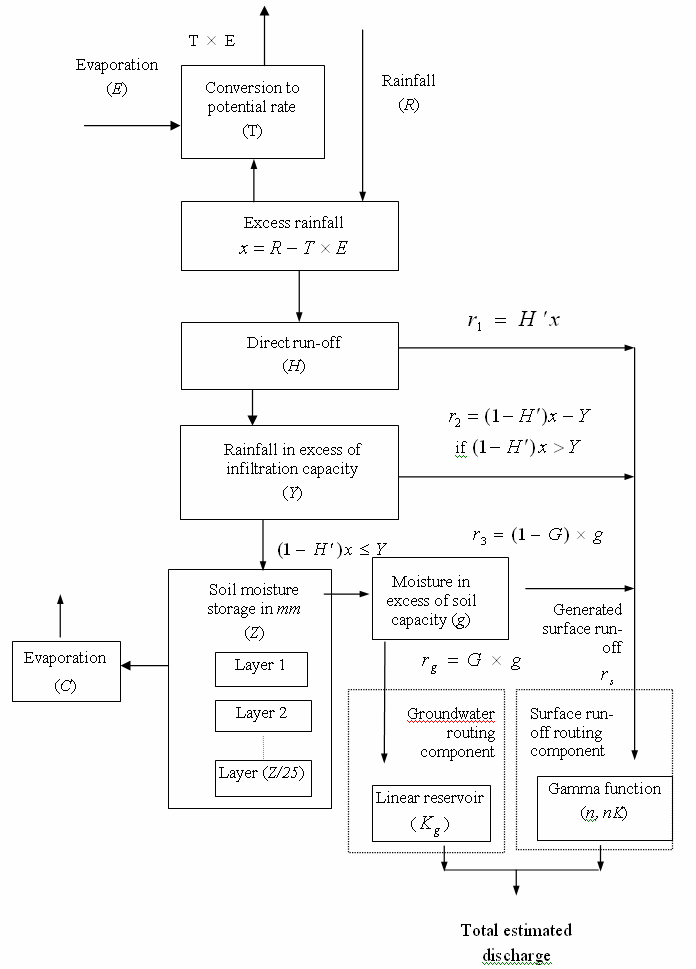 The water balance component divides the soil column into horizontal layers, which contain a prescribed amount of water (usually 25 mm) at their field capacities. Evaporation from soil layers is treated in a way that reduces the soil moisture storage in an exponential manner from a given potential evapotranspiration demand. The routing component transforms the surface runoff generated from the water balance component to the catchment outlet by a gamma function model form (Nash, 1960), a parametric solution of the differential routing equation in a single input single output system. The generated groundwater runoff is routed through a single linear reservoir and provides the groundwater contribution to the stream at the catchment outlet.

The surface run-off generated from the landscape is routed (attenuation and lag) to the catchment outlet using the linear cascade model of Nash (1960). The model was obtained as a general solution relating a given input of unit volume to a given output as in equation 1.

h(t) = ordinates of the pulse response function (d-1); and

is the incomplete Gamma function (dimensionless).

It was shown by Nash (1960), that under constraints of conservation, stability, high damping and the absence of feedback, this two-parameter equation with n an integer and K positive, is almost as general a model as the differential equation of unlimited order. With additional flexibility obtained by allowing n to take fractional values, the impulse response of this equation has the ability to represent, adequately, almost all shapes commonly encountered in the hydrological context.

The water balance component uses five parameters to describe the movement of water into and out of a generalised soil column under conditions of atmospheric forcing: C, Z, H, Y and T.

Generated surface runoff is calculated from the excess rainfall (rainfall minus potential evapotranspiration) as saturation excess runoff (shallow sub-surface flow) plus the Hortonian runoff and plus a proportion (1-G) of moisture in excess of the effective soil moisture storage capacity (g) (i.e. through flow). The remaining proportion (G) of the latter is the deep drainage component discharged from the groundwater system to the stream.

Groundwater and surface runoff, generated from the water balance component, are routed to simulate the associated lags between rainfall events and flow out of the catchment. The routing component has four parameters (n, nK, G, Kg), where the first two are for surface runoff and the remaining two are for groundwater discharge. The governing equations used in the routing component of SMARG are presented as follows (Kachroo and Liang, 1992).

The total generated surface runoff is routed using a gamma function model form (i.e. based on equation 1) to obtain the daily total estimated discharge at the catchment outlet.

The generated surface runoff (rs mm·d-1) and the routed runoff (QrT mm·d-1) can be time averaged, as in equations (2) and (3), to represent the daily values.

The linear model described by equation 4 (below) is the simplest representation of a causal, time invariant, relationship between an input function of time (generated runoff) and the corresponding output function (routed runoff). It is used in conceptual modelling, as a component, representing the routing or diffusion, effects of the catchment on those components of the rainfall hyetograph contributing to the outflow.

The parameter pair n and nK are chosen for optimisation, rather than n and K separately, because n is a ‘shape’ parameter and nK is the scale parameter. Expressed in this way, the two parameters are likely to be more independent than n and K would be separately, both of which contribute to the scale and to the shape, although in different ways.

The mass balance equation for the groundwater system can be written as in equation 5:

There are three basic components of discharge from the groundwater system:

Therefore, QTg is assumed to comprise groundwater discharge to the stream and to the land surface that eventually reaches the stream. The lag times between natural replenishment and groundwater discharge are substantial, and the groundwater system behaves like a highly damped system. This mechanism can be visualised as one of displacement whereby water from episodic drainage events is continually added at the bottom of the root zone and is removed from the groundwater system at a very slow rate, and can be represented as a linear reservoir with a large storage coefficient.

The pulse-response function for the groundwater component can be obtained in a manner analogous to equation 1, as in equation 6 (i.e. equation 1 with n and Γ(n) equal to 1; Vaze et al., 2004).

The recharge QTrech and the discharge QTg can be time averaged to mm·d-1 in an analogous manner to the generated surface runoff (rs) and the routed runoff (QrT), as in equations 2 and 3.

Parameters in SMARG and their default values are defined in Table 1.

Table 1. Parameters in SMARG and their default values

Note: the number of soil layers is determined from "Z" (Soil Moisture Storage Capacity) and a constant in the code which is 25 mm (the depth of each of the "groundwater"/soil layers in mm of water).

The variables listed in Table 2 can be recorded.

Nash, J.E. (1960). A unit hydrograph study with particular reference to British catchments, Proceedings of the Institution of Civil Engineers, 17: 249–282.