The Source Stochastic Analysis tool contains a model for the generation of daily rainfall data for multiple sites using the transition probability matrix (with Boughton’s correction). Stochastic climate data can be used as inputs into hydrological and ecological models to quantify uncertainty in environmental systems associated with climate variability. For a detailed description of the multi-site, daily rainfall generation model refer to the Scientific Reference Guide.

Using historical climate data as inputs into hydrological models provides results that are based on only one realisation of the past climate. Stochastic climate data provide alternative realisations that are equally likely to occur, and can therefore be used as inputs into hydrological and ecological models to quantify uncertainty in environmental systems associated with climate variability. Stochastic climate data are traditionally used in storage yield analysis to estimate reservoir size for a given demand and reliability, or to estimate system reliability (number and levels of water restrictions) for a given storage size and demand characteristics.

Note: You must have an open active scenario to use the Stochastic Analysis tool.

Use the Stochastic analysis dialog:

The Stochastic Configuration dialogue opens (Figure 1). To begin the analysis:

The Stochastic Analysis tool will automatically load the rainfall data that is being used by the scenario, and then stochastically generate rainfall replicates for each sub-catchment. 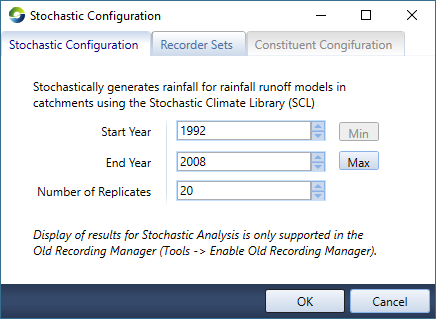 The Stochastic Analysis tool may take some time to complete, depending on the number of sub-catchments, replicates, number of recorded variables and type of rainfall data used in the scenario. Generally, the more complex the model or scenario, the longer the stochastic generation of rainfall data will be.

Once the Stochastic Analysis tool has finished, the modelled flow and constituent parameters appear in the Recording Manager and can be viewed by selecting the parameter of interest in the right-hand column of the Recording Manager. The new Results Manager, which is the default viewer for single analysis, does not currently support stochastic analysis.

A list of all available statistics is displayed in the top, middle window under Statistics. To view a particular statistic, select it under Statistics to view the data as a box and whisker plot, which shows the spread of data. Figure 2 shows the monthly mean plot for one of the nodes in the model.

Figure 3 shows how a box and whisker plot represents the distribution of data. 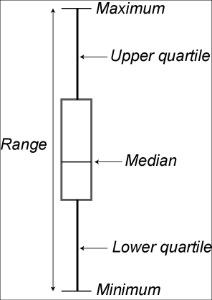 A new screen appears with the stochastically generated flow and constituents replicates and statistical outputs (Figure 4).

Although stochastic hydrology is a mature science, new stochastic models are continually being developed, usually with marginal improvements on previous models. The modelling approach for generating stochastic rainfall data has been selected because of available expertise, the model’s robustness, along with extensive and successful model testing using data from across Australia.

The Stochastic Analysis tool can take a long time to run, particularly when applied to large catchments and when you have specified many replicates (ie over 100). Such applications can take several hours to run. Therefore, when first designing a scenario with stochastically-generated rainfall data, keep the following in mind: