A re-regulating weir is typically used to create a pooled body of water from which effluents can be supplied by gravity flow, or to provide a suitable water level for pump operation. A weir also allows the water level to be maintained at a level suitable for navigation and recreation.

A weir is a type of storage. It uses the multiple-outlet functionality.

A weir is represented as a type of storage node with additional functionality.

The principal differences between modelling a re-regulating weir and modelling other types of storage are:

Weirs are operated based on specified minimum and maximum operating levels, downstream orders and upstream flow. Effluents from the weir pool may either be regulated or unregulated. Effluent flow is a function of the water level in the weir and the capacity of the effluent off-take. For regulated effluents, flow also depends on regulator configuration (ownership of outlet capacity), and orders placed on storages.

The total storage volume of a weir is generally less than the maximum possible upstream flow. As a result, when the upstream flow is large enough, the weir is subject to "drown out" from the downstream water level. A flow/level relationship to the main effluent on the weir’s downstream main channel is used to determine when the weir is subject to drown out. This relationship is applied in the model to constrain effluent (outlet path) capacity.

"Drown out" results in the operational decision to remove the weir structure. When the weir structure is removed there is no longer controlled storage in the weir, and the length of river subject to inundation from the weir reverts to a normal river routing relationship. 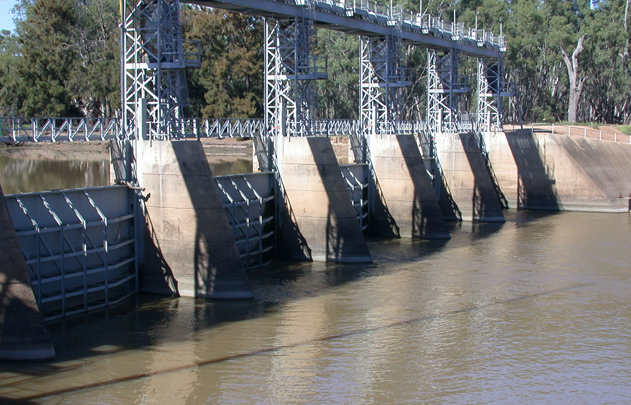 In addition, the reach on which the weir is built is normally treated as composed of a number of divisions (sub-reaches), each of which needs to be processed separately (refer to Figure 33, where the divisions are indicated).

The approach taken in the modelling described here is first to perform calculations based on the assumption that the weir is not present.