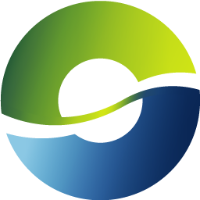 The Exponential Decay model applies an exponential decay to the stored constituent mass in a node or link.

This model operates at a river reach scale.

The Exponential Decay model is automatically installed with Source. For Lumped constituent routing, it can be applied to constituents in:

For Marker constituent routing, it can be applied to constituents in:

The decay model is not currently available for Storage Routing Links if Marker routing is used.

Exponential decay describes the decay of a quantity at a rate that is directly proportional to the amount present (Equation 1).

where M is the quantity and k is the decay constant. Integrating Equation 1 gives a solution for M:

where M0 is the initial quantity.

where ln is the natural logarithm.

Substituting Equation 3 into Equation 2 and simplifying gives the following expression for constituent mass:

In Source, the model describing the exponential decay of a constituent must consider inflows and outflows from the storage (here the term "storage" is used in a general sense and refers to the water stored in a river reach or reservoir, for example). Assuming instantaneous, fully mixed conditions, the change in constituent mass over time can be determined from the following conservation of mass relationship:

where V is the instantaneous volume of the storage. Unlike Equation 1, a general solution does not exist for Equation 6. An approximate solution can be derived using the backward (implicit) Euler method, giving:

Using the above expression, we can then express Equation 7 in terms of the half-life rather than the decay constant:

Equation 9 forms the basis of the Exponential Decay model in Source. The solution becomes less accurate as the half-life becomes smaller (particularly if the half-life is smaller than the time step) and as the flushing rate (Qout /Vt+1) becomes larger. It also follows from Equation 9 that if Vt+1 = 0 then Mt+1 = 0.

This function allows to decay concentration and then remove the certain percentage of the constituent. The basic formula is the equation 9. 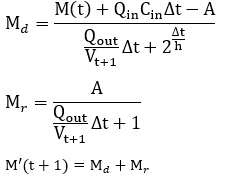 A= V* TrendConcentration is the total mass for the task concentration.

The function will remove the input percent value directly from the processed constituent mass.

M(t+1) is the final constituent mass after the process of Trend Concentration and Percent Reduction.

which is one half of the initial mass.

The Exponential Decay model is based on Equation 9. However, this equation is derived under the assumption that constituent outflows from the storage are at the same concentration as the storage. In Source, this assumption does not always hold. Evaporation, for example, can completely deplete a storage without removing any constituents. The evaporated volume is subtracted from the storage volume before the Exponential Decay model is applied. As a result, it is possible for the storage volume to be 0 and the constituent mass to be greater than 0, which can give rise to mass balance issues and infinite constituent concentrations. The model addresses zero end-of-time-step storage volumes using a concept of deposited mass L, which is a constituent mass deposited on the riverbed and lost to the system. The solution procedure is as follows: