A new option called 'Use Airspace' has been added to 'Ownership' in storage and weir nodes as of Source 5.16. In this release further changes have been made to the ownership in storages calculations to better support this functionality.

In some circumstances certain storage owners may be able to exceed their share of storage temporarily. These owners should only spill when external spill occurs, and they should be the first to spill in that case. The owner who can exceed their share using the available airspace is called an airspace owner.  There are certain conditions of ownership while enabling this functionality. They are:

For comparison and evaluation purposes, a new setting has been added to Scenario Options for Storages to specify the Proportional losses sharing method. 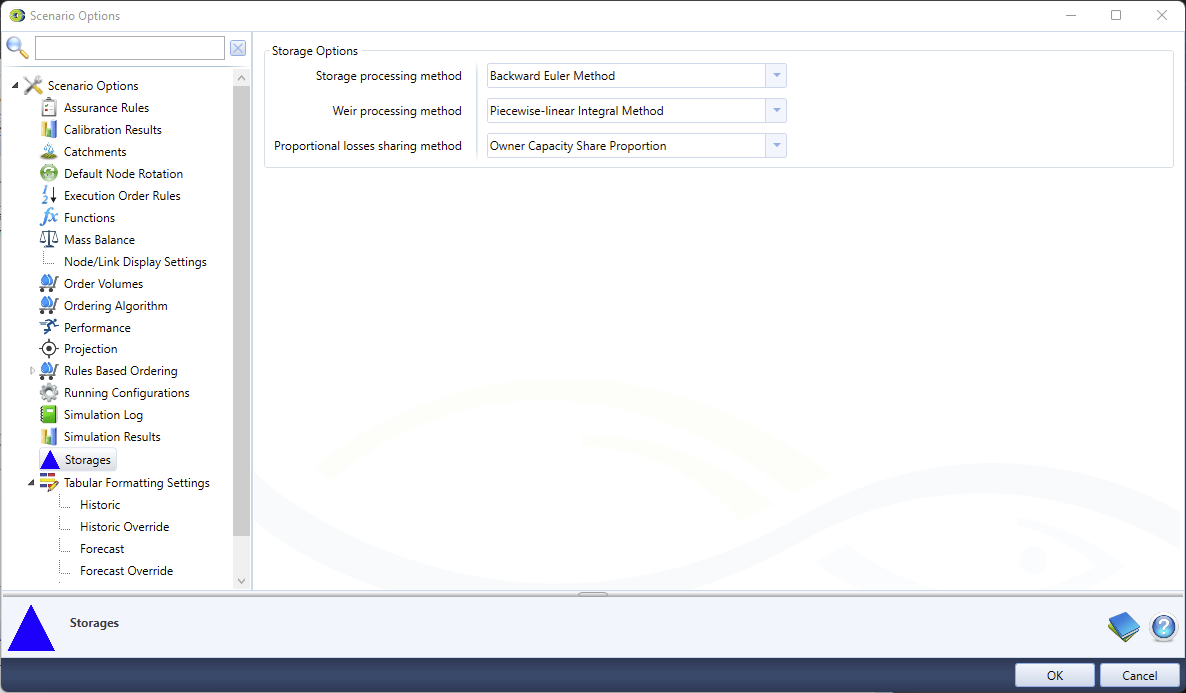 The two options are:

In order to use the 'Use Airspace' option for an owner, the Owner Working Volume Proportion method must now be selected for the scenario. The option changes calculation for all storages in the scenario, not only those using the 'Use Airspace' option for an owner. It is expected that the Proportional losses sharing method option will be removed from Scenario Options before the next production release, in December 2022, at which point the new calculation method will be adopted for all projects.

Further changes to 'Use Airspace' option

In addition to the new calculation method, there are two additional changes to the 'Use Airspace' option:

Changes to Ownership in Storages - SRG

The calculations used in the Owner Working Volume Proportion method are outlined below, specifying the additions / modifications to the methodology described in the Ownership in Storages - SRG. Only the additions / modifications made to the methodology are explained here and hence the original SRG page should be referred to for the unchanged sections. The Owner Capacity Share Proportion still uses the method as outlined in the SRG page.

The new method makes the proportional loss calculation fixed at the start of the timestep and thus allows for the calculation of spills required for the airspace owner logic. By having the proportional losses fixed also happens to simplify other calculations, meaning that some iterations for estimating and solving the losses are no longer needed and the logic for positive and negative losses become exactly the same. The fundamental difference is how the losses are calculated. Previously, sharing the proportional losses was calculated based on each owner's proportion share of the storage volume at the end of the timestep (which is capped at each owners capacity share when internal spilling is enabled). Both spills and losses were back calculated so that the attributed share of the loss was the same share of the final storage. The new method instead shares losses according to the owner's maximum release volume for the timestep, referred to as the Working Volume.

For an owner i, the working volume is calculated as:

Wi - Working volume of owner i.

Ii - Volume of inflow this time step belonging to owner i.

Ci - Net volume of water ceded by owner i this time step to all other owners, negative if this owner has ceded less water to other owners than received.

Fi - Fixed loss attributed to owner i, negative if a gain.

The total working volume for all owners is:

The proportional loss attributed to owner i is Pi and is given by:

P is the total proportional loss, negative if a gain (rainfall).

If the total working volume is less than or equal to ownership tolerance level (0.0001 m3), then proportional loss Pi becomes:

Based on the working volume, release, borrow, internal spill, external spill and proportional loss, an owner's final storage volume is calculated as:

Vi2 - Owner ’s volume of water in the reservoir at the end of time step.

Bi - Total borrowed from other owners by owner i, negative if the owner is lending to other owners.

Ri - Volume of regulated water released this time step for owner i.

ISi - Net internal spill of owner i, negative if spill into owner’s share.

ESi - External spill for owner i.

The final storage volume is updated after calculating the borrowed, internal and external spill values.

As an owner's proportional losses are now known, they can now be included in the borrow and payback calculations.

Equations (2) and (3) from the previous SRG, for calculating the maximum release for an owner, are replaced by:

Pi  - Owner's proportional loss (as specified in Equation 3 and 4)

Previously, losses would not affect borrowing as the losses were based on end of timestep storage volumes. This allowed for cases where an owner would borrow water and then receive internal spills (and potentially then rain) which would increase the owner's storage volume above zero.

The total external spill by all owners is known and is given by total outflow minus the total release of all owners:

Before each owner’s share of spills can be determined, it is necessary to determine which owners will spill. Where the spill calculation returns a negative value, owners can receive internal spill, while a positive value indicates that the owner is spilling (has filled their storage share). Equation (5) is rearranged to give an expression for the volume of water that can spill (internally and externally) from an owner’s capacity share:

The equations 26 to 29 in the previous version of SRG are made redundant due to the inclusion of proportional loss based on storage working volumes.

Spill by the 'Use Airspace' owner

If there is an owner which uses the 'Use Airspace' option, the spill calculated for that owner, in equation 8, is capped at the total external spill:

Case where internal spills are disabled

When internal spills are disabled, each owner's spill (including the 'Use Airspace' owner's) spills will be modified so they are it is greater or equal to zero:

The calculations in the previous sections established which owners are spillers when proportional losses are taken into account. The next step is to determine the internal (between owners) and external (leaving the reservoir) components of the spill by the owners. This is determined by following the steps outlined below.

1. Firstly, the total of all spills greater than zero is calculated as:

2. If the spill by 'Use Airspace' owner is greater than zero, then it is calculated first before other steps:

a) The external spill of the 'Use Airspace' owner is:

b) The total spill for the remaining owners is adjusted by the amount externally spilled by the 'Use Airspace' owner:

c) The external spill for the remaining owners is adjusted by the amount externally spilled by the 'Use Airspace' owner:

3. Calculate the internal and external spill for each owner. If the 'Use Airspace' owner's spill is greater than zero then the TotalSpill and ExternalSpill values will have been modified above. Otherwise they will be unchanged.

a) Case when internal spills are disabled

The internal spill is:

The external spill is:

This has been modified so that the max calculation is calculated earlier, in equation (10), for all owners.

b) Case where internal spills are enabled

When internal spills are enabled, equations (33) to (43) from the previous version of the SRG are followed without any changes (other than using the possibly modified TotalSpill and ExternalSpill values above).

The equations (44) to (50) from the previous version of the SRG are made redundant due to the adoption of the new proportional loss calculation method, as in equations (3) and (4) above. The final storage for each owner is thus calculated according to equation (5), above, as all values have now been calculated.