After a parcel of water enters the treatment measure, it begins to move towards the outlet. But even under ideal conditions (which are rare) it tends to spread out due to turbulence. This behaviour can be modelled quite closely by a series of well-mixed waterbodies notionally located within the physical storage.

These notional well-mixed waterbodies are the CSTRs, or Continuously Stirred Tank Reactors (the name is derived from the more structured world of chemical engineering processes). The number of CSTRs used has a large effect on the modelled behaviour. A single CSTR models a tank or pond in which the inflow is immediately and completely mixed with the existing contents. A sedimentation pond or gross pollutant trap may approach this condition. A string of many CSTRs in series mimics plug flow with only limited dispersion, such as might occur in a long vegetated wetland or swale.

The number of CSTRs (N) can be related to the short-circuiting parameter (n) of Fair & Geyer (1954), or the hydraulic efficiency of

, respectively. The figure below shows the hydraulic efficiencies of stormwater detention systems of various shapes as a guide to the appropriate selection of the number of CSTRs to use in music. 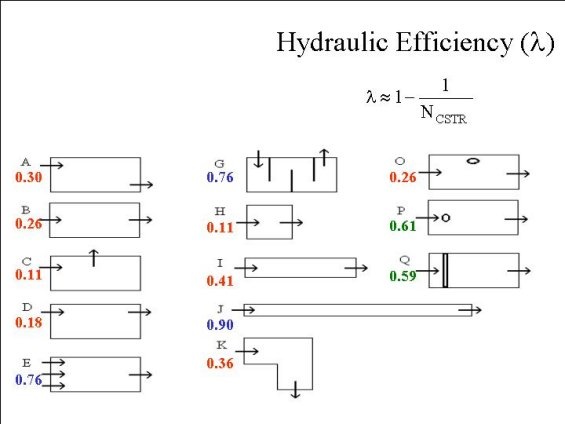 The cases considered above may be categorised into the following three groups:

< 0.75; and
iii.poor hydraulic efficiency where

Contaminant attenuation by the k-C* model is calculated separately at each time-step for each CSTR in a physical storage. As the assumed number of CSTRs in a storage increases the volume of each becomes less. Even so, the overall result is a greater change in pollutant concentration at the storage outlet.

The length of each notional well mixed waterbody (or CSTR), as a fraction of the total storage length, provides a mnemonic for the amount of contaminant dispersion in the storage. One CSTR