Insight is eWater’s multiple-objective optimisation and decision support framework. This framework allows for more efficient evaluation of planning options than the traditional manual trial and error approach that modellers often use. The optimisation tool enables a more thorough examination of potential planning scenarios and the resulting trade-offs between desired outcomes.

For example, if the requirement is to minimise both costs and adverse environmental impacts, then Insight will search for options which express the trade-offs between these two competing objectives. Each solution has different cost and performance outcomes. Insight does not make any judgements about how important each of the impact statistics are, instead it searches a range of options which have different types of impacts. Insight will only discard an option, ‘A’, if it is clearly inferior to an alternative option, ‘B’. That is, if ‘B’ performs better than ‘A’ on at least one of the statistics and there is no statistic where ‘A’ performs better than ‘B’. At the end of its run, Insight will produce a range of optimal solutions (the Pareto Front).  Figure 1 shows an example (after Blackmore et al., 2009).

The optimisation results can be examined via a number of graphical tools to help the planners consider the trade-offs between objectives and the relationship between decisions and objectives. 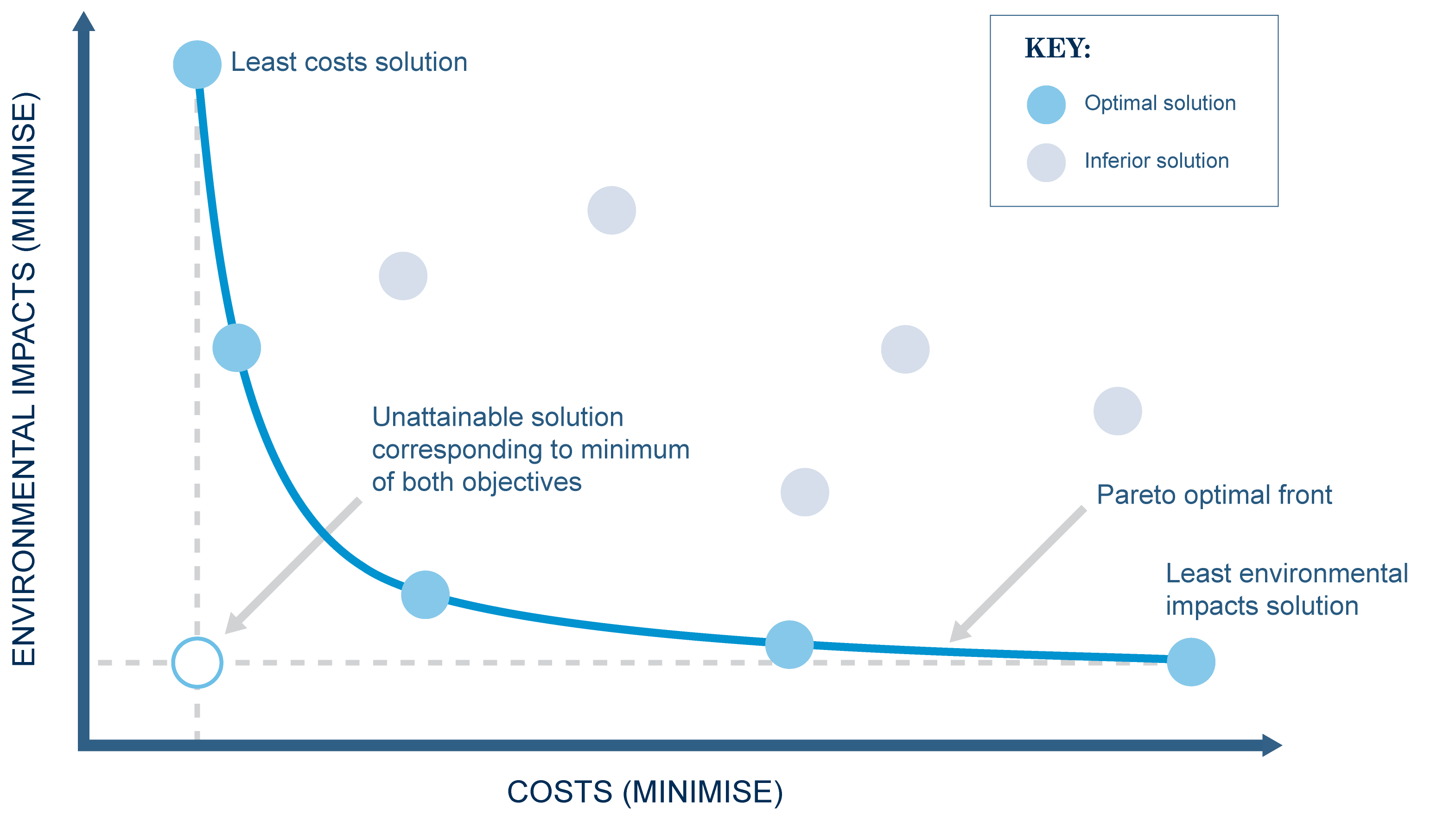 Insight operates at the spatial and temporal scales of Source models.  It runs Source models multiple times to search for optimal solutions.

The multi-objective optimiser used in Insight was developed by Deb et al. (2002).  It was originally adapted for use with Source by eWater CRC with permission.

Insight was originally developed by eWater CRC and has subsequently been enhanced by eWater Ltd to meet the needs of the Melbourne Water Corporation.

The multi-objective optimiser used in Insight is the Non-dominated Sorting Genetic Algorithm II (NSGA-II) developed by Deb et al. (2002).  This is a Multi-Objective Evolutionary Algorithm (MOEA) that is based on the principles of the well known Genetic Algorithm (GA).

Insight requires a functioning Source model to work with.

Use this heading if the functionality is a plugin or requires any 3rd party software applications.

Details of the derivation of the Non-dominated Sorting Genetic Algorithm II (NSGA-II), including pseudo-code, are available in Deb et al. (2002). NSGA-II is a variant of the well known Genetic Algorithm (GA) and the principles of the GA are discussed in text books (e.g. Loucks and van Beek, 2005).

User requirements are summarised in Table 1. Interactions between Insight and Source are shown in Figure 2.

A single scenario in a Source model could represent a particular system configuration, inflow sequence, demand model, etc.  Insight can optimise the decision variable(s) (DVs) over multiple scenarios. The DVs and objective functions are chosen by the modeller.

Figure 2: Flowchart of interactions between Insight and Source for multi-scenario optimisation 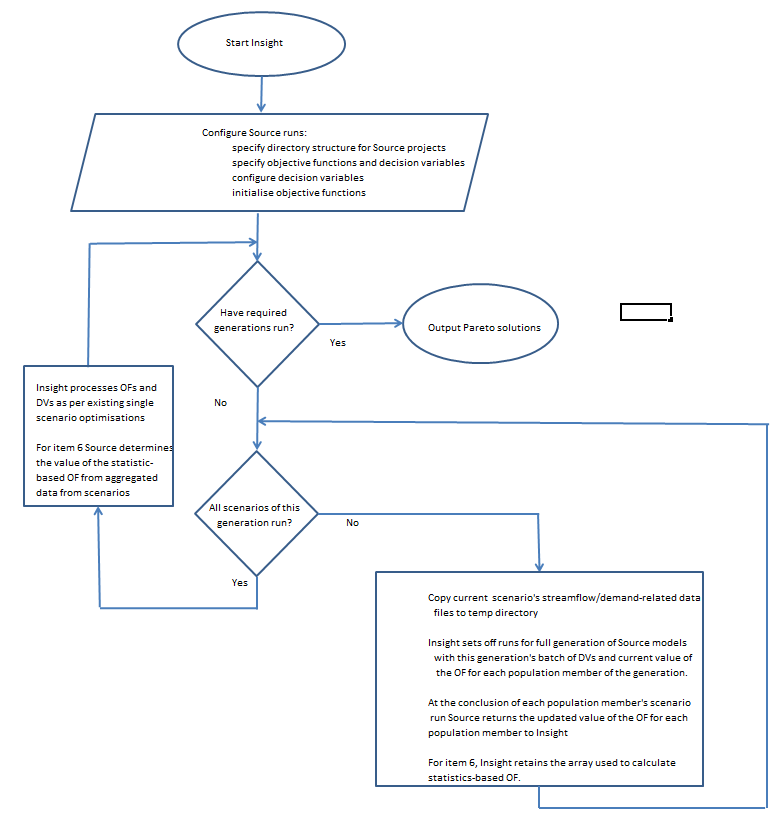 The functionality listed in Table 1 is all concerned with input and output data handling and how Insight and Source interact, and there is no new science involved.  Therefore, the functionality in Insight is not discussed further here and reference should be made to the Insight: Multi-objective optimisation for information on how to use it.

For the i’th generation where 1 ≤ i ≤ ng (and the total number of generations, ng, is input by the modeller):

At a minimum, Insight requires the following information to run an optimisation:

The decision variables and objective functions must be defined in the Source project as global Functions.  Hence, in order for a Source parameter to be included in an optimisation problem, that parameter needs to be able to be defined through the Function editor.

More details on data are provided in the Source User Guide.

All items selected for recording in the Source Recording Manager by the modeller from single and multi-replicate model runs are written to file by Source so that results are able to be analysed for selected outputs:

The structure of the file is:

A separate stand-alone tool is available that produces the following statistics and output for modeller selected items or all items in the above file: