The Geographic Wizard is the first in a series of steps required to create a catchments scenario. It consists of a structured sequence of windows (described below) that guides you through the process of defining the catchment area. On completion of the wizard, you will be presented with a node-link network.

On completion of a step, move to the next step by clicking Next and backwards by selecting Back. Note that you cannot go back to the network definition step once you have completed it and moved on to the next step. Cancel allows you to quit the wizard at any time.You will lose all the data entered so far. Once you have completed all steps, click Finish to close the wizard and view the catchment in the Geographic Editor.

The Welcome screen gives some information about the steps within the wizard. These include:

Enter a scenario name and an appropriate description, or accept the defaults.

You must define the sub-catchments and stream network within the catchment, using either a catchment map or Digital Elevation Model (DEM).

The DEM based network generation method (shown in Figure 1) requires a DEM, and divides the entire node-link network into sub-catchments based on a user-specified measure of upstream area (sometimes called stream threshold), usually for first-order streams. You can define points on the stream network where confluences between sub-catchment will be formed. The minimum sub-catchment area can also be modified. For example, in a node-link network spanning 1000 km2, entering a stream threshold of 10 km2 will produce approximately 100 sub-catchments.

The minimum sub-catchment area defines the drainage area at which headwater catchments can be formed (also known as drainage threshold or stream threshold). As a result, any link in the generated network will have a total upstream catchment area of at least this amount. Individual sub-catchment sizes will vary and some will be significantly smaller. Notably, where two connected nodes are very close together, the link between them will be short and the corresponding catchment can be very small.

The Draw Network method (shown in Figure 2) allows you to define the networks manually, by loading a sub-catchment map (a raster with cell values set according to sub-catchment number) and then connecting sub-catchments by clicking and dragging using the mouse. This specifies how those sub-catchments are linked together by the node-link. You should use this method when you have previously defined the boundaries of your sub-catchments, either by using Source or an external program.

To use the DEM-based Network Generation method (shown in Figure 1):

Once a DEM has been loaded, you can alter it by right-clicking and choosing the various options available in the contextual menu: 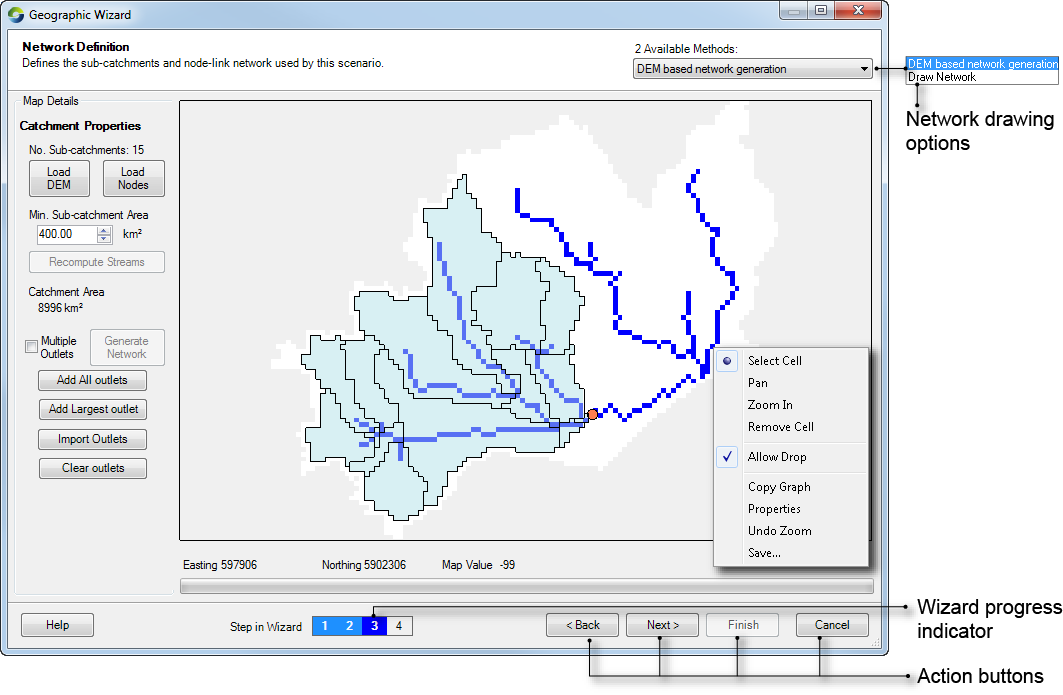 Ordinarily, nodes are placed at stream confluences identified in a DEM analysis. It is possible to supplement these nodes and place additional nodes at different locations, typically to identify some point of interest, such as a gauging station of a dam wall. This will also cause additional sub-catchments to be created.

Additional nodes are added from a file of geographic points (eg .MIF, .SHP, .tsd). The points are automatically added to the streams and become nodes and catchment boundaries in the network. There is the potential for this automated process to give erroneous results, so it is important to understand the process used to ‘snap’ to the stream.

When added, each additional point is compared to the stream map to identify the closest point on the stream. If that point is within a threshold distance of 1000m, a node is added on the stream. This process is necessary because in many cases, the recorded location of gauging stations (or other features of interest) doesn’t correspond to the location of the stream, as determined from a DEM.

The snapping process works well in many cases, but it can result in errors, particularly where there are two or more distinct stream reaches, all within the distance threshold. The system does not have a way to determine the correct location and instead chooses the closest. This issue typically arises where a gauging station is just upstream or downstream of a confluence (when two or three stream reaches can be within the threshold) and in cases where a small minimum catchment area has been selected relative to the areas drained by the gauge. In the latter case, the higher density of sub-catchments and links can lead to a point snapping to a small, lower order stream.

You can use a list of nodes to define the sub-catchments as well:

You can set Source to recalculate networks manually by enabling Multiple Outlets. Then, select multiple points/cells on the DEM as required and click Generate Network.

Additional buttons under Multiple Outlets allow you to work with outlet nodes:

Note that the total area covered by the catchment can be viewed in the Recording Manager once the scenario has been run (Figure 3).

To use the Draw Network method (Figure 3):

If you need to delete a link, right-click on the map and choose Select Link/Node from the contextual menu. Click on the link you wish to delete; it will turn red. Press the Delete key on the keyboard or click Delete Selected elements on the right of the map. Ensure that you delete any unattached nodes that were connected to the deleted link. To re-draw links, right-click on the map and choose Draw Network. Continue drawing links as before. 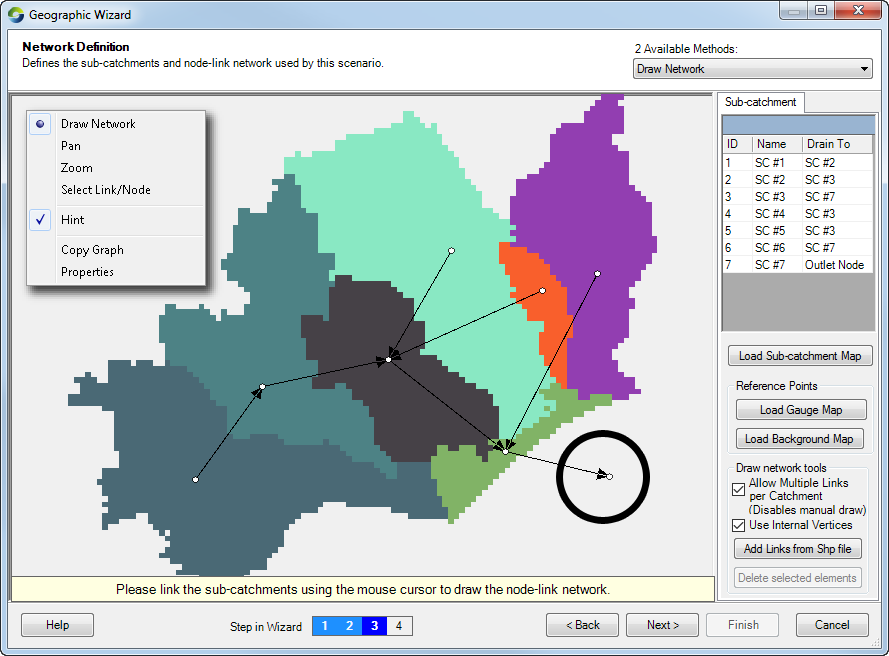 The other options in the list (Pan, Zoom, Copy graph and Properties) have the same function as that described for using the DEM based network generation method.

Additional buttons under Reference Points assist you in adding further detail to the network map. Load Gauge Map and Load Background Maps allow you to upload a shape file of gauges or an image like a stream flow map to assist in drawing the node-link network. 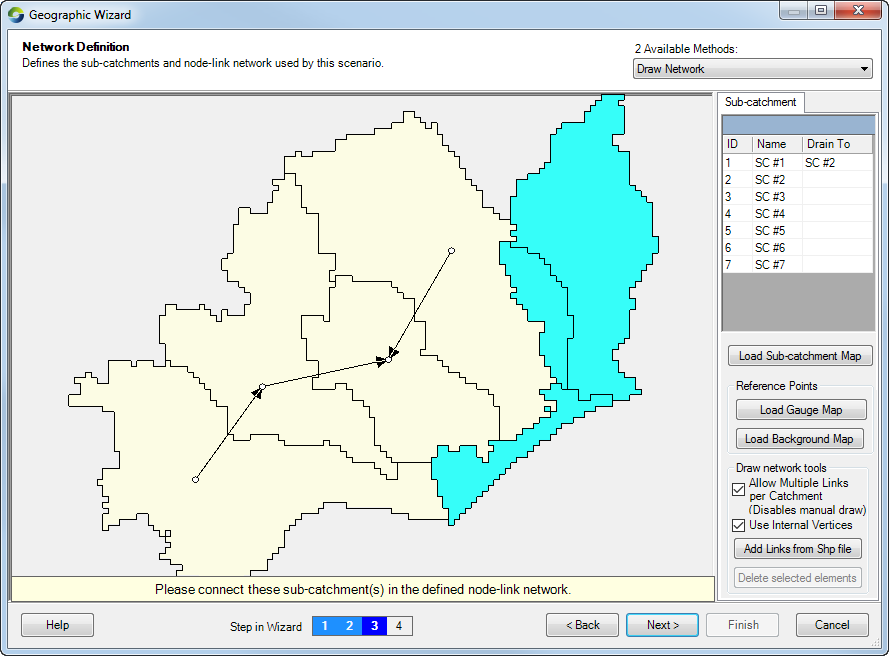 You must specify all possible functional units present in the area of interest, or that you want to represent in the scenario. There are three ways of defining FUs: manually, from a text file, or from a shape file (Figure 5). This is synonymous to the menu item Edit » Functional Units » List. 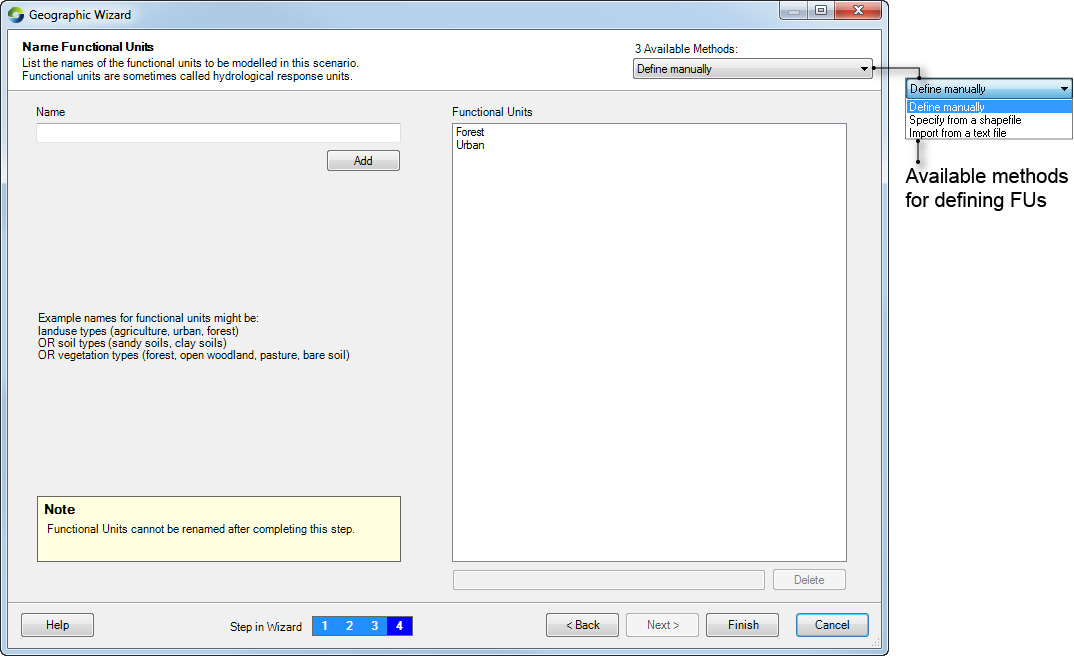 By default, FUs are defined manually. Once added, they appear on the right under Functional Units.

You can also import FU names from a shape file (Figure 6): 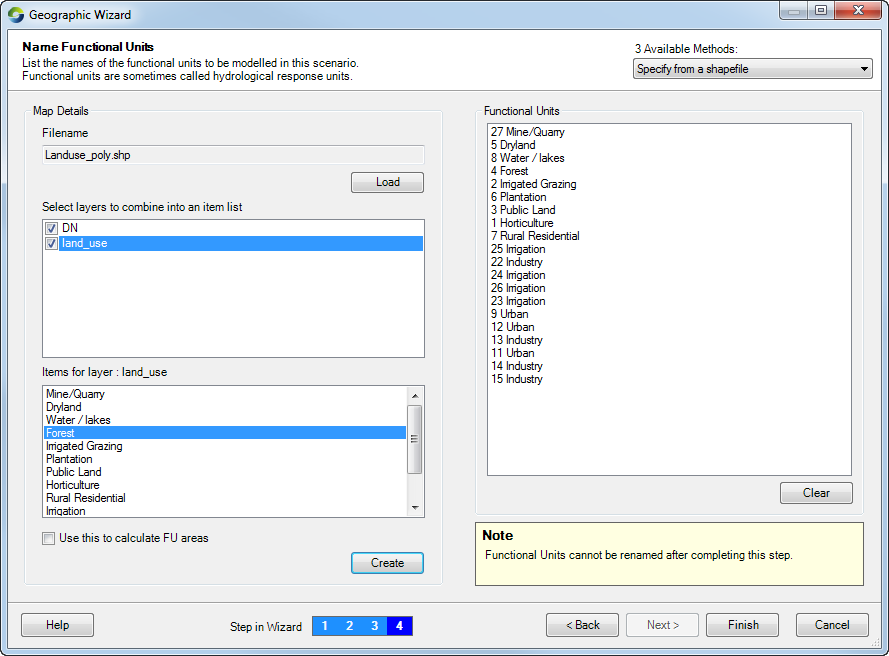 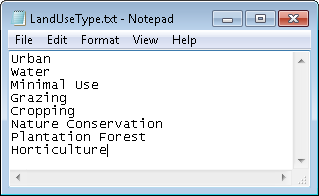